A Nepali alumnus taps into the international community to raise funds for earthquake relief. 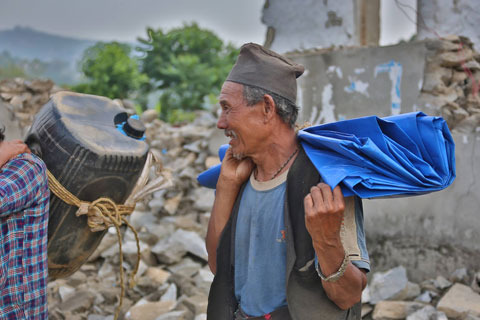 The hours following the Nepali earthquake were filled with fear for Aditya Todi. Unable to get through jammed phone lines, he felt a rising dread that a moment's time might have stolen all he held precious.

Eventually, Todi, '14, reached his family, who had ridden out the quake unharmed in Kathmandu. But his relief was quickly replaced by a sense of duty to other Nepalis. Growing up in a country afflicted with persistent poverty, in an era marked by civil war, domestic terrorism and political upheaval, Todi says he always intended to give back to his country. The 7.8 quake on April 25 put that instinct into high gear. "It's hard for me to describe how much has been devastated," he says.

Since the morning after the earthquake, Todi has been sandwiching his days as a consultant in Boston with an international fundraising effort for earthquake relief, in cooperation with his cousin Lokesh Todi, a recent Yale School of Management graduate who lives in Kathmandu.

The two started with an initial goal of raising $20,000 by tapping their network of friends in the West. But after soaring past that goal in just a few hours, they've bumped up their target several times. To date, the Todis have raised more than $150,000. 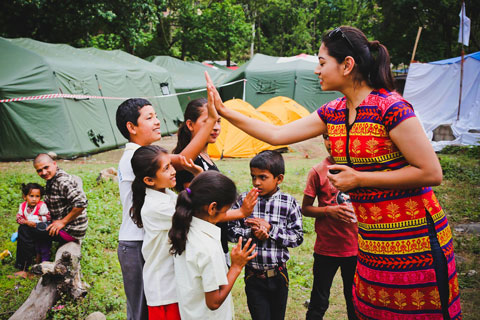 Todi, who worked with nongovernmental organizations as an international relations major at Stanford, and his cousin Lokesh Todi, who studied the aftermath of the 2010 Haiti earthquake at Yale, will distribute the funds they've raised to Nepal-based organizations, drawing on their academic backgrounds to choose organizations that will have the most impact.

Locally based organizations, says Todi, have less access to capital but firsthand knowledge of the needs and challenges of the country's hard-to-navigate, heavily damaged rural areas. And organizations located in the communities they are helping, unlike some international relief organizations, are committed for the long term. "We want to ensure that those who know best have the resources to do their best," he says.

The Todis have distributed some of the funds raised to Childreach Nepal, an organization that is supplying medicine, tents and food to damaged villages and erecting temporary schools to replace those that were destroyed. New schools, Todi says, will provide some normalcy to kids traumatized by the quake and also give them a safe place to go—vital since the chaos of the quake could exacerbate the problem of human trafficking. The Todis expect to sign another agreement soon with an NGO that specializes in sanitation and building toilets.

Todi is pleased by their success: $150,000 exchanges for more than 15 million Nepalese rupees, a significant amount in a country where a hearty meal can be had for 100 rupees, he says. But he knows that sum is paltry when compared with the total need. To keep from feeling overwhelmed, he thinks of a line attributed to Mother Teresa: "We ourselves feel that what we are doing is just a drop in the ocean," he quotes. "But the ocean would be less because of that missing drop." 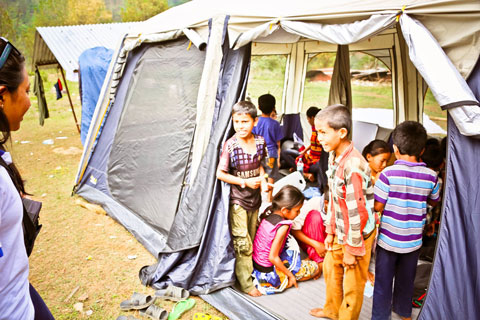 Students in a makeshift classroom in Melamchi. (Photo: Lokesh Todi)

Todi hopes that something positive will arise from the devastation. The aftermath of the quake has inspired new camaraderie among Nepalis of different religions, ideologies and ethnicities that give him hope for a brighter future, he says. And he is encouraged by the outpouring of relief efforts, including those of Sanskriti, a South Asian student group at Stanford, which coordinated on-campus initiatives including fundraising and supply drives in response to the earthquake.

But with monsoon season just around the corner and the world's attention waning, Nepal's needs remain dire, Todi says. "The day CNN walks out doesn't mean the suffering has ended."

He's weathered many a storm to secure ownership of the Lusitania wreckage. Now Gregg Bemis wants to get to the bottom of suspect events a century ago.

The Best Lies Ahead

The Case for Discontent