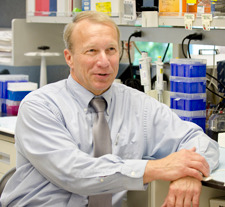 Through his breakthroughs in the lab, his care for patients with daunting diagnoses and his dedication as a mentor to other physicians, Oliver Press left a lasting legacy.

A teacher’s son, Press arrived at Stanford from St. Louis in the late 1960s. He was ever grateful for the George E. Gamble Honors Scholarship that helped pay his way through school, says his wife, Nancy Ottman Press, ’72, who met her future husband during the Stanford in Germany program in 1971.

Press majored in biology and became a researcher during his undergrad years, at one point making his way to Half Moon Bay, state permit in hand, to study abalone for his senior thesis project. A low draft number tilted him toward medical school, and Press headed to the University of Washington, where he received his PhD in 1977 and his MD in 1979. He remained affiliated with the university for much of his career. At the time of his death, Press held the first David and Patricia Giuliani/Oliver Press Endowed Chair in Cancer Research at the Fred Hutchinson Cancer Research Center, where he had been a faculty member since 1986. He held a joint appointment at the University of Washington.

Press worked especially on radioimmunotherapies, which use cancer-targeting antibodies to aim radiation straight at tumors, sparing healthy tissue from damage.

Damian Green, who worked closely with Press at Fred Hutch and the University of Washington, says he was the “go-to person for lymphoma, not just at our institution or in the region or the U.S., but internationally.”

One of his greatest legacies is his mentorship of so many cancer researchers. In a letter nominating Press for the American Society of Hematology’s 2017 Mentor Award (he received the honor posthumously), Green wrote, “[His] commitment to ontogeny in both the smaller and greater creatures developing under his careful stewardship is exceptional. A transformational mentor identifies needs, has a vision to guide growth and selflessly watches mentees flourish. Ollie transformed my life.”