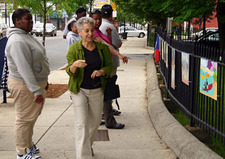 At 3 years old, Joan Green boldly asked her mother for dance lessons. "I don't know how I knew there were dance lessons when I was 3," Green says. It was 1942: No TV informed her about what lay beyond her Philadelphia living room, and certainly no Internet.

Her mother said no but yielded two years later. By age 5, studying with a Martha Graham-trained instructor, Green was launched into a lifetime dominated by steady themes of dance, art and intergenerational/interracial community. Her dance teachers warned her that her body wasn't suited to a career, Green recalls, "but what my dance teachers didn't understand is that it was not the body that makes a dancer, it was the dancer's soul."

Green transferred to Stanford from Cornell as a recently married senior. She remembers Stanford mainly as the place where she plunged full force into visual arts.

After leaving California (and her first husband) in 1963, Green arranged her life in Cambridge, Mass., so she could dance every day. Soon she started teaching. First came the Children's Dance Project, followed quickly by the Cambridge Performance Project, which for 25 years has brought dance, theater and music classes to children and young teens. With a colleague, she created the Back Porch and Back Pocket dance troupes, in which women of varying ages and mobility levels told their life stories through dance, and brought dance to senior centers and nursing homes. (Both groups disbanded when funding ran out.) She has begun offering dance classes for home-schooled children ages 9 to 14. In a class called Dancing Outside the Lines, Green emphasizes improvisation for students from 40 to 80 years old.

Most recently, Green unveiled a public art project called Hope for Haiti, in which paintings depicted everyday life in Haiti in times without disaster or strife. It was produced by Green's students at a charter school in Dorchester, Boston's roughest neighborhood, where she has taught since 2002. Additionally, Green spends two months each year painting in Jamaica. Four of her works have been commissioned by Children's Hospital in Boston.

Green, 68, moves with the grace of one whose life is in a state of perpetual choreography. Her silver hair is cropped short, her body is trim and her wardrobe favors the same Fauvist hues that color her paintings. Between them, she and her husband, Bobby Brown, have six grown sons.

"I feel like I am in the middle of a creative explosion," Green says, "and I just have to get out of the way and let it happen."