The seeds of computing’s nascent history were planted in 1961, when Stanford fans held up colored cards during halftime at football games to create giant coordinated images in the stands. The project was a fun visual stunt—and an early test by Larry Breed of the first computer animation language. 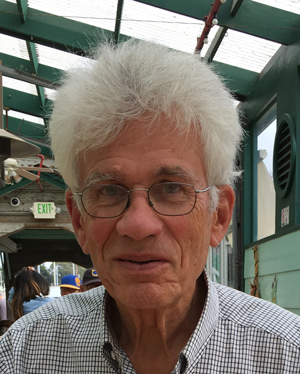 Lawrence Moser Breed, ’62, MS ’65, whose later work on APL (A Programming Language) had a huge impact on early computing, died in Palo Alto on May 16 of Lewy body dementia. He was 80.

Breed helped with the early implementation of APL as a Stanford graduate student and later at IBM, which he joined after finishing his master’s degree. In 1973, he was a co-winner of the Grace Murray Hopper Award from the Association for Computing Machinery. Breed went on to co-found Scientific Time-Sharing Corporation, where in 1972 he and a colleague created one of the world’s first email systems. Five years later, he returned to IBM, where he remained until retiring in 1992.

“He was brilliant and he was humble,” says his sister, Lucinda Breed Lenicheck, ’70, MA ’73. “He was always achieving something that surprised everybody, probably himself included, but later in life, he would simply say, ‘I’m just a programmer,’ just not tooting his own horn ever.”

In retirement, Breed continued his creative use of technology, especially at the annual Burning Man festival, where he was known as Ember. He built Chaotick, a 20-foot-tall, rotating, flaming tether-ball-like sculpture, which is one of the event’s oldest art installations. And, in response to concerns over litter and debris scattering into Nevada’s Black Rock Desert during the nine-day festival, he used a mile of orange netting to create the iconic Trash Fence.

Breed was predeceased by his first wife, Donna (Stone, ’61). In addition to his sister, he is survived by his wife, Beverly Radin; daughter, Emily; and brother, Chett, MA ’74.