Can soda be green? 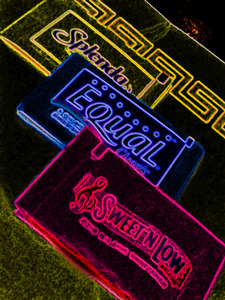 SAGE ( Sound Advice for a Green Earth) is a project by advanced students in Earth Systems and other programs to answer sustainability questions. Submit questions.

Q: Are there any environmental implications associated with the consumption of diet soda as opposed to regular soda? Are there environmental consequences to manufacturing artificial sweeteners vs. using normal sugar?

A: We often talk about the health effects of regular soda and its diet alternatives. With Americans drinking more than 10 billion gallons of soft drinks every year, considering which type is more eco-friendly is important, too.

The sugar in regular soda comes from sugarcane, sugar beets or corn as high fructose corn syrup. Each crop has its own environmental impacts, including loss of wild habitat, pesticide use and fertilizer runoff. Sugarcane in particular requires lots of water and typically causes heavy erosion and water contamination where it grows. Sugar from cane “has arguably had as great an impact on the environment as any other agricultural commodity,” according to the conservation group WWF.

The environmental effects of producing artificial sweeteners are less clear-cut. The three most common sweeteners—aspartame, sucralose and acesulfame K—are generated in industrial laboratories. Aspartame, for example, is sugar fermented by bacteria and then chemically modified. Still, one 2009 study conducted for Coca-Cola by the Carbon Trust company found that Diet Coke had a modestly lower carbon footprint than regular Coke.

At the other end, the results shift. Our bodies are adept at processing sugar, and wastewater treatment facilities easily process the by-products of regular soda. However, most artificial sweeteners are calorie-free because we can’t digest them; they pass through to sewage treatment largely unaltered. Recent studies show that when artificial sweeteners reach waterways, they start to break down in the sun into potentially toxic compounds. The effects on ecosystems aren’t known, but new steps in wastewater treatment might become necessary.

I prefer regular soda’s slightly higher carbon footprint to diet soda’s unknown and distributed waste impact. My advice: See if you can minimize your intake of either, or even cut soda out completely. Your body will probably thank you, and the planet will, too.

We’ve almost all indulged ourselves with an iced soda on a hot day—most people enjoy a nice carbonated, sugary beverage. But peering deeper into the effects of the production and disposal of this treat on the environment and on people may make chronic soda drinkers hesitate. Let’s contemplate a soda’s life cycle.

It typically takes 2.7 liters of water to make just 1 liter of soda. This water goes toward the soda ingredients, the cleaning of equipment, the packaging of the drink and other steps in the supply chain. It does not, however, include the water that pours into sugarcane production; with that added, it can surge to upwards of 15 liters of water for 1 liter of soda. The production of other drinks is equally bad or worse.

Breweries, for example, use a minimum of 4 liters of water to make 1 liter of beer, while a liter of wine often demands well over 5 liters and hard alcohol can take over 30. These estimates undershoot the likely true totals, as few account for the entire supply chain. Certain issues have arisen, for example, when the water used for soda production comes from drought-prone areas, worsening water problems in poor regions (particularly in India). Also, certain soda factories have been closed over pollution issues when they discharged toxic effluents into the environment.

Waste in the environment

As mentioned in the Essential Answer, human waste from diet sodas often contains the unbroken-down artificial sweeteners. According to a study at the University of North Carolina, the body absorbs only 10 percent of soda’s sucralose; the rest sweeps through wastewater treatment plants unprocessed and enters directly into water sources. Several studies found sucralose in water samples across North America, suggesting the persistence and widespread distribution of artificial sweeteners in aquatic environments. In particular, if the sweeteners leach into the Gulf Stream (or other currents), they can be distributed worldwide. Thus far, no adverse environmental effects have been discovered; however, this understudied topic may present harm that scientists have not yet investigated, and researchers have suggested that it could interfere with everything from plant photosynthesis to organisms’ feeding behaviors.

Given that many regular sodas have shifted from using sugar to high fructose corn syrup (HFCS), we should include a quick analysis of its environmental impacts as well. Corn is mainly grown as a monoculture plowing up huge amounts of land, and using significant quantities of pesticides and fertilizers to counteract the rapid depletion of soil nutrients. These fertilizers have in turn seeped into rivers in the Midwest United States particularly, contributing to the anoxic “dead zone” in the Gulf of Mexico. Corn crops also take space from native plants and animals that would otherwise live in a given area. The entire production process uses significant water resources, pesticides, fertilizers, and even oil for the harvesting and transportation process (source). How does it stack up against sugar? The answer to that question could take another article (and someone did write one), but in general, domestically produced sugarcane does better than domestically produced HFCS in fossil fuel use, emissions and the release of toxic substances, while HFCS beats sugarcane in using less water. All of these factors depend on the distance ingredients were transported, but ultimately corn and its conversion into HFCS tend to take a slightly heavier toll.

It’s important to note that this list of environmental effects is preliminary. Diet and regular soda can negatively impact the environment in a variety of ways, many of which are yet unknown. Each ingredient listed on the back of the can/bottle (and even the container itself) has negative effects that the company does not advertise. Your choices as a consumer affect soda companies’ decision-making, so whether your reasoning is health-based (for a summary of health effects of soda, see here), environment-based or just taste-based, make your opinion count. Take advice from any group with vested interests with a grain of salt (or sugar)!

Money Does Grow on Trees