Imagine walking into a high school classroom and, instead of rows of desks and chairs facing a whiteboard, you see workbenches. Stationed around the room is an array of machines: a 3-D printer, a laser cutter, a vinyl cutter and a milling machine. Metal drawers and storage shelves are stocked with wood, resins, burlap, glue, machinable wax, acrylic and dozens of other supplies.

You have entered a fab lab.

What’s that? Short for “fabrication laboratory,” the concept—born at MIT in 2001—was to create an environment full of multipurpose tools where one could build nearly anything. The idea caught on, and now there are close to 600 fab labs worldwide, according to fablabs.io, a website that supports and organizes the fab lab movement. The underlying goal is to provide broad access to modern means of invention.

Inherent in the opportunity to create in these spaces is the opportunity to learn, and to learn about learning. After arriving at Stanford in 2009, assistant professor Paulo Blikstein, once a student in the original MIT fab lab, became the first to translate the concept into an education research context when he opened the Transformative Learning Technologies Lab at the Graduate School of Education. Appearing in some ways like a typical fab lab, TLTL exists to design and research new technologies for education and to study the hands-on learning process.

Several years in, the lab buzzes with a rotating cast of PhD students, postdocs, interns, collaborators and staff. The fruits of their labors include the Hapkit, a low-cost programmable device that helps students learn about motions and forces through touch; the GoGoBoard, open-source hardware used for educational robotics and science experiments; and an inexpensive Lego-style kit that students can use to build simple machines.

Blikstein’s team is also pushing the boundaries of student assessment. Having acknowledged the limits of stand-ard-ized testing, the tech-savvy group is experimenting with devices that track students’ gestures, eyeball movements, facial expressions and heat output; they then download the observations as massive data sets and use supercomputers to digest the information and locate patterns. The results help them discern what behaviors and characteristics best guide the learning process—findings that, in turn, help them develop alternative curricula for schools and train teachers how to implement hands-on learning environments.

Philosophically, Blikstein and his lab mates are at odds with the traditional public school teaching model. The world is changing, he says, and traditional teaching methods don’t prepare students for the new environment.

“I think the divide of the 21st century is the pedagogical divide. The kids that are exposed to more modern pedagogies, like project-based learning, interest-driven learning—kids who are allowed to have an idea, do a project, learn how to do robotics, learn how to do more experiential science, pursue their own interests, go deep into things—are the kids in private, affluent schools where they have the freedom and the equipment and teachers to promote that kind of learning,” Blikstein says. 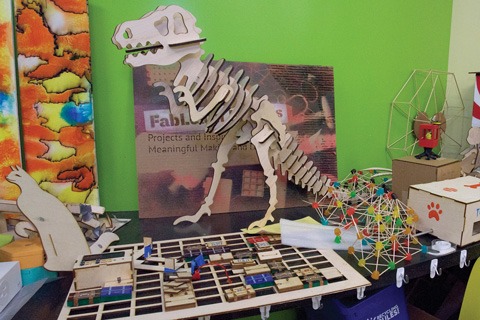 “The kids that are in public schools are limited to the traditional pedagogies, which are just ‘sit and listen to the teacher.’ . . . Obviously, the skills that those affluent kids in those private schools are getting are the skills that will get them the better jobs, the leadership positions. They will be the creative leaders and the inventors of the 21st and 22nd centuries, and the kids who are not having the opportunities to follow their passions and build things and make things—they will be 20th-century workers in a mid-21st-century economy.”

Not one to sit by idly, Blikstein founded the FabLearn Program (formerly Fab Lab@School), which has built digital fabrication labs in public middle schools and high schools in the United States, Russia and Thailand. With a grant from Google, five labs have been built in public schools near Stanford, including one at East Palo Alto Academy.

Jesus Navarrete, a 2015 graduate of the high school, is one of two students who became involved with Blikstein’s lab as an intern after his junior year. He continued on during his senior year as a mentor to other students from the academy. That year, his science class came to Stanford each week to learn physics through projects they did at the lab. Navarrete and his friend Miguel Lopez teamed up to design the fab lab built at their school. While Lopez went on to study engineering and computer science as a freshman at Cal State-Los Angeles, Navarrete has stayed with the lab, spending about 30 hours a week assisting the researchers there, working on his own projects, and planning for a potential future in design or engineering.

Along the way, he’s learned about his own learning style. “The way I learn is I need to be able to work on a computer and work hands-on equally,” Navarrete says. “It’s important to learn what kind of blend of learning is best for you.”