An exotic indulgence, yes, but these bars serve a higher purpose, too. 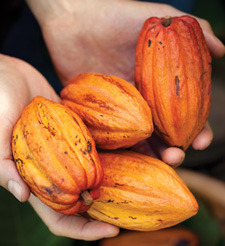 Nat Bletter's backpack is where the good stuff is. Weaving through a crowd of foodies in San Francisco's Ferry Building one evening in January, he spots someone who doesn't appear to be eating anything. He swivels the enormous black pack around to his front and pulls out a plastic baggie. "Would you like to try some chocolate?" he asks, reaching into the bag with a pair of bamboo tongs.

Bletter, '92, is visiting from Hawaii, where he runs Madre Chocolate with co-founder David Elliott. They're here at the annual Good Food Awards to pick up a prize for their Triple Cacao bar, which blends pulp from cacao pods and fragments of processed beans (nibs) with organic, fair-trade chocolate. The blend is meant to represent the history of cacao, originally harvested in South America only for its mushy pulp. According to Bletter, the Triple Cacao is the only chocolate bar in the world that contains cacao pulp, whose taste he describes as "like lychee, mangosteen or lemon curd." Its accolades in the States and internationally are satisfying results for a 2 1/2-year-old venture joining the worldwide surge of artisanal chocolatiers.

Whether through Triple Cacao or a bar like the Rosita de Cacao, made with a rare Mayan spice, Madre Chocolate wants to connect chocolate lovers with the roots of their favorite food. More than that, Bletter and Elliott aim to close the geographic and economic gap between cacao grower and chocolate maker. (Elliott's background is in rural development and environmental justice in cacao-growing regions.)

Typically, Bletter explains, poor farmers in the tropics grow, harvest, ferment and dry the beans, then send them thousands of miles away to chocolatiers, who make all the money from the finished product. Madre Chocolate partners with local growers in Hawaii and has long-range ambitions to set up operations near their other sources in Mexico and Venezuela. "We want to bring chocolate making back to the origins . . . so that more money can go to the [growers'] community."

There's a reason why Bletter seems driven by something other than entrepreneurship: He has a PhD in ethnobotany, and his route to the chocolate business was winding.

While at Stanford—he designed his own major in virtual reality—a girlfriend pointed out all the fruit trees on campus, observing that in her native Taiwan they would be harvested, while here students ignored them. So Bletter created a map showing where people could pick their own food on campus and in nearby neighborhoods. When he worked at SRI International in Menlo Park, he would bike through Stanford and Palo Alto, collecting fruit for lunch. (Students today make good use of campus edibles; see "Don't Fear the Reapers".)

After seven years working in virtual reality and graphics, Bletter took a sabbatical traveling through Asia—including a visit to the Dalai Lama's herbalist. He spent time with people in local markets, learning about plants and their uses. Then he changed course.

"I wanted to feel like I was doing something more for the world, rather than writing a computer program that only ten people were going to use." He enrolled in a doctoral ethnobotany program at CUNY and used his mathematics and programming skills to streamline lab evaluations of the medicinal uses of plants across different cultures. His data-crunching equations "would make all the other botanists run out of the room screaming," he says.

Bletter's research took him to places where cacao grows or plays an important cultural role. Working with the indigenous Asháninka people in Peru, he began to connect cacao with the idea of helping people directly. "They were thinking about inviting lumber companies in to cut down all their gorgeous mahogany trees because they needed quick money," Bletter explains. "Cacao is a sustainable, non-timber forest product—that got me thinking about what kind of [native] crop they can grow." Cacao has high value and is light enough to transport by canoe from remote areas.

While Bletter was working at the New York Botanical Garden, archaeologist Cameron McNeil noted his growing interest in cacao and asked him to contribute a chapter to Chocolate in Mesoamerica: A Cultural History of Cacao. It was published in 2006. "All my friends said, we don't care if you write a book about chocolate, we want you to make us some. Then we'll talk." Bletter obliged, putting cacao beans into his kitchen blender to make a first, crude batch. He kept at it, giving bars to friends and selling small batches at holiday fairs. He started experimenting with raw cacao, with increasing healthful antioxidants, with bigger machines. "Chocolate added three years to my PhD," he says. When Bletter went for a postdoc at the University of Hawaii in 2009 he met Elliott, whose wife is an ethnobotanist.

Cacao was first brought to Hawaii in the 1850s, but interest has waxed and waned for years, says H.C. Bittenbender, a University of Hawaii at Manoa researcher who studies cacao, coffee and kava. The first attempt at commercial growing came during World War I, when the United States was cut off from its European chocolate supply. When the war ended, the movement fizzled.

During the past decade, however, new enthusiasts arrived on the islands with experience in chocolate making and an appreciation for the unique advantages of Hawaii, including the possibility of making an American product grown by workers paid fair wages. "It's still a very young undertaking," says Bittenbender, who started an industry group, the Hawaiian Chocolate and Cacao Association, in 2012. "We've had many false starts, and we're not there yet, but it took [Kona] coffee a while to get there."

For its part, Madre now employs nine part-time workers, with a warehouse in Honolulu for roasting and winnowing the beans, and main production—grinding, tempering, molding, wrapping—30 minutes away in Kailua, alongside its retail shop. Bletter says their break-even point is in sight.

Bletter is known in the chocolate world for truly living up to his self-titled position of flavormeister. "He's got an amazing palate," says Sunita de Tourreil of the Chocolate Garage in Palo Alto, which offers tastings and sales of small-batch chocolates, including Madre. "Because of Nat's background in ethnobotany and curiosity and interest in all things edible, he just makes really interesting combinations of tastes and flavors." Examples: chipotle, allspice, hibiscus, pink peppercorn, strawberry guava, Hawaiian-grown tea.

At the long tables during the evening awards event, diners keep exclaiming about one bar's fruitiness. It gets that taste from the cacao pulp, Bletter explains. Madre's Hawaiian-origin bars have unique taste, too, due to the state's microclimates. "We're really trying to show the terroir of the cacao," he says. "Even if you go one valley over, you can get a completely different flavor." (One Kona farm's cacao has notes of toffee.)

The next morning, farmers set up their stands outside the Ferry Building, as the sky turns orange and pink over the Bay Bridge. To warm himself, Elliott stomps his feet at the table inside one of the archways where Madre will offer samples. Bletter, slightly rumpled, arrives by bike, laden with the backpack and a Madre Chocolate poster. Out of his pack comes his laptop, chocolate bars, brightly-colored tablecloths, a knife and a jar of a macadamia-and-chocolate spread called Cinnamon Daddy MacTella. He passes out dollops of it to the other chocolate makers readying their booths.

Bletter sets up a slideshow, showing tasters the cacao-making process. In a few moments, he'll be dropping pieces of award-winning chocolate to waiting hands. When tasters exclaim, "fruity!" he'll tell them all about the pulp. People will open their wallets and peel out $10 bills to take a piece of Hawaii-made chocolate home with them. They'll take Bletter's card to learn where to get more. Or possibly, how to sign up for Madre's chocolate boot camp in Oahu in August: a weeklong exercise in cacao planting, cultivation, harvesting, fermenting, drying—and chocolate making.

Cameron Walker is a freelance writer in Santa Barbara, Calif.