A momentary lapse of integrity can be enough to scare you straight. 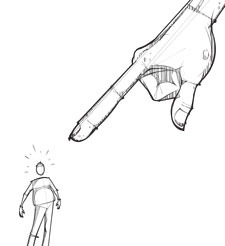 In my junior year of high school, I was closing out what had been a memorable and meaningful final semester. A few weeks earlier, the adviser for the student newspaper had notified me that I would be the editor during my senior year, and planning had already begun for our first issue. I was involved in several other extracurricular activities, and had a demanding course load and a part-time job at a local gas station. Like lots of kids that age, I was busy.

I needed some breathing room, and I figured the final exam in American history would be one place to find it. The course was taught by an assistant football coach—a burly, taciturn guy who could induce compliance with nothing more than an intimidating glare. Unfortunately, he was better at teaching tackling than he was at, say, illuminating the complexity of 19th-century labor law. I assumed the test would be easy, and I had other priorities. I showed up to the final poorly prepared.

Most of the questions were multiple-choice and most of the answers I knew, but there were a handful that stumped me. By the time I had finished the test, dread had settled over me—a realization that I was not going to ace this test, and that my final grade in the course was not going to be the "A" I expected. As I walked toward the front of the class to turn in my test paper, another student's paper was sitting on the teacher's desk in plain sight. A quick glance was all I needed to recognize that one of the answers on my test was wrong and his was right. I paused, feigning indecision about an answer I had chosen, stepped to one side and changed my answer. The teacher eyed me warily, stood up and asked for my test paper. He looked at the paper, looked at me and said under his breath, "I could give you a zero."

He didn't, but he didn't need to. And maybe he knew that. The shame I felt was punishment enough; I carried it around for days, feeling as if I had betrayed myself and everyone associated with me. I worried that my teacher/coach might assume I behaved like this all the time. It was only one question on one test, but the damage it did to my sense of self was enough to deter me from ever cheating again.

I recalled that episode with disquieting clarity while reading Joan Hamilton's story about the psychology of cheating. Joan examines the motivations that persuade people to momentarily bend their values to accommodate a shortcut. Expedience is a powerful, seductive force. I imagine all of us have fallen under its spell at some point.

Given the number and prominence of cheating scandals in recent years, one could legitimately ask whether integrity is in tatters. Is cheating more prevalent now than in earlier eras? Maybe; maybe not. The better question may be what we can do to help us resist the temptation.

Certainly, the shame associated with cheating can be a formidable disincentive. As I discovered in that classroom long ago, exposed and humbled by the specter of disrepute, I never wanted to feel that way again. Whatever else I learned in that history course, nothing was more important than that.