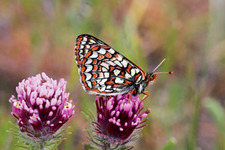 Here's an idea with wings: reintroduce the Bay checkerspot butterfly to Stanford's Jasper Ridge Biological Preserve, the 1,200-acre site west of the campus in the Foothills.

Studied for years by Stanford professor Paul Ehrlich, the butterfly has been extinct at Jasper Ridge since 1998. The possibility of reintroduction has long been under consideration, but the prospect is fraught with scientific uncertainty. The experiment's design is yet to come, as is an extensive government and University approval process.

If a reintroduction attempt goes forward, it will likely be led by Professor Carol Boggs, director of the program in human biology and former director of Stanford's Center for Conservation Biology (established by ecologists Paul and Anne Ehrlich in 1984). Alan Launer, Stanford's conservation program manager and a former member of the Ehrlichs' group, says Boggs has spearheaded the most recent discussions.

"Virtually all Bay checkerspot butterflies," Launer noted in an email, "are found in the southern part of Santa Clara County." Will reintroduction be tried eventually at Jasper Ridge? "Probably," concludes Launer.