Bouldering With the Bump 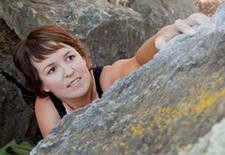 Her pregnancy tipped off Delfin to a dearth of outdoor wear for expectant women: She couldn't find so much as a pair of long underwear that fit. Tapping into the undercapacity of domestic fabric mills during the economic downturn, she launched Mountain Mama from her home in San Bernardino County. "I couldn't have started in a strong economy," she says. "Plants were just desperate enough to listen to me."

A niche market was born. In her first year of business making maternity wear for climbers, she won the 2010 Polartec APEX Award for design innovation and excellence and the 2011 inspiration award from the Outdoor Industry Association.

Delfin, who grew up in Livermore, Calif., and attended Evergreen State College in Olympia, Wash., had always enjoyed outdoor sports. She had scaled Peru's 19,000-foot El Misti, trekked the Inca Trail and won the Panamanian National Bouldering Competition. She was teaching in Memphis when the downturn hit and universities started pulling jobs. As Delfin faced the mediocre teaching prospects, she turned instead to creating a business out of clothing designs she had sketched after the birth of her son. That long underwear she couldn't find while pregnant? She had designed her own, plus a capacious fleece jacket.

"My mom says, 'It's because of Stanford that you started Mountain Mama,' " Delfin says. "I came out ready to start a business. Stanford gave you the confidence." It was a nice coincidence that one subject Delfin has taught is the anthropology of birth.

She exhibited her Mountain Mama wear at the Outdoor Retailer show in 2010, puzzling some buyers with her straddling of the outdoor and maternity realms. The outdoor industry had lines for infants, even dogs, but not pregnant women. "It was a massive blind spot." Maternity boutiques didn't need any convincing.

"The good thing about it is they don't look maternity," says Adrienne Laurencelle, general sales manager for The Prospector in Fairbanks, Alaska, which carries three Mountain Mama items. Their message, Laurencelle says, is "This is going to stretch out as much as you are."

Delfin's firm is on track to be profitable in three to five years, and she still does some teaching—lecturing at Whittier College on the cultural anthropology of Latin America. Her son, Fausto, who turns 3 in May, has rock-climbing shoes of his own. And Delfin agrees with her mother about Stanford: "They really want you to be who you are. They let you loose and see how you flourish."

Wendy Jalonen Fawthrop, '78, is a senior copy editor at the Orange County Register.

One year later, most applicants are happy.