Bringing Asian-American artists out of obscurity. 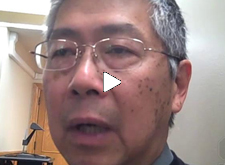 Senior editor Gordon H. Chang hopes the volume—more than a decade in the making—will spark nothing less than a reinterpretation of American art history and American culture. With attention to both conspicuous figures (watercolorist Dong Kingman, sculptor Isamu Noguchi) and the less recognized (19th-century portraitist Lai Yong, printmaker Yoshida Sekido), the book celebrates art that has been largely unappreciated, misunderstood, forgotten, lost or simply ignored.

Co-edited with Mark Dean Johnson and Paul J. Karlstrom, Asian American Art (Stanford University Press, $80 and $39.95) offers concise biographies of 159 artists. These entries are rich with anecdote: ceramicist Jade Snow Wong was named for a rare snowfall in San Francisco on the day she was born in 1922; actor and painter Sessue Hayakawa left the United States after he was nearly killed in the suspicious collapse of a film set.

Ten essays include one by Chang on Asian artists’ “deployments, engagements, [and] obliterations” during World War II; one on Asian-American photography by Dennis Reed, dean of arts at Los Angeles Valley College, and one about female artists by Valerie J. Matsumoto, an associate professor at UCLA.

Stanford history professor Chang’s immersion in the topic grew from family roots: his father, Chang Shu-chi, painted 100 doves in a 1940 work commissioned by the Chinese Nationalist government as a third inauguration gift for President Franklin Delano Roosevelt. The artist was traveling America as a goodwill ambassador when Pearl Harbor was bomb-ed, and he was stranded in the States until 1946. After decades out of sight, Messengers of Peace was located at the FDR library in New York. The photo of it in Asian American Art tries valiantly to convey the sprawling impact of a silk painting as tall as an adult and more than 11 feet long.

What Good Are the Humanities?

Why they clash with U.S. culture today, and why they matter.