Q: Why can't we install windmills in our backyards and trap the power individually for our personal use? Is the limitation how to store it and feed it into my electrical circuits, or what? Is it cost, or sound pollution to my neighbors, or has a household system just not been developed yet?

The U.S. Department of Energy (DOE) suggests a checklist to make sure small wind projects are a right choice for individual homeowners: Is there enough wind? Do you have enough space? Are towers allowed in your area? And finally, how much energy can you produce?

In going through the checklist, it quickly becomes apparent why we don't all have windmills in our backyards, even though the technology is commercially available. (You can buy windmills as small as nine feet tall with blades spanning six feet, though most are sized more in the range of 60 feet tall with 23-foot blade diameters.) One new turbine creating buzz in the wind community is the Skystream 3.7, which is applauded for its size (10-foot blades), efficiency at low wind speeds (they can perform well with average annual wind speeds above 12 mph), and relatively low price ($15,000).

To have a successful home wind operation, the average wind speed at your location should average at least nine miles per hour. The DOE produces a map of the wind resources across the United States. As the map shows, the places with the greatest wind resources are typically in the Great Plains, along mountaintops and on the coasts. 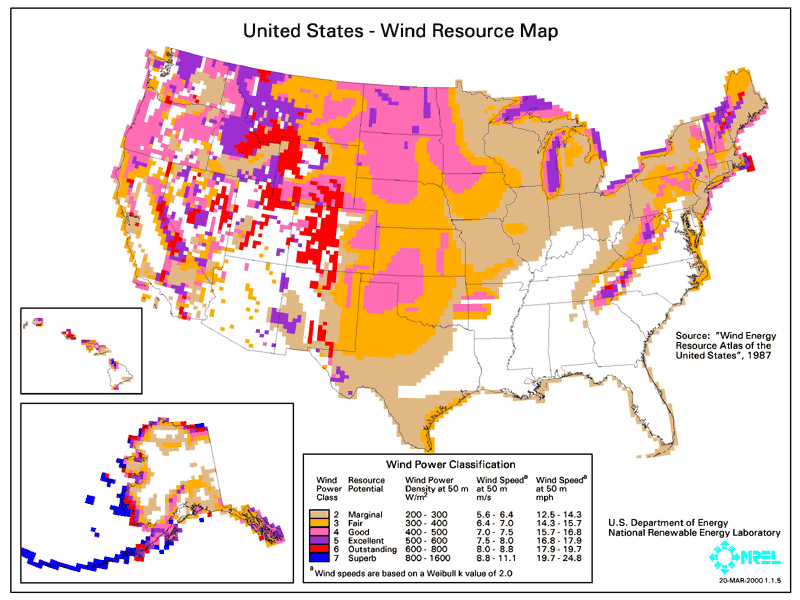 However, the map of wind resources depicts wind speeds at a height of 50 meters in the air—that's over 160 feet, or 16 stories! And generalizations often don't hold—the average wind speed will depend heavily on the specific conditions at your site. You can use a device called an anemometer to measure the wind speed in your backyard over time—you could even make one yourself out of an old plastic Easter egg, once you've eaten the goodies inside.

What about space? According to the windmill company Southwest Windpower, the ideal location for a wind turbine is 20 feet above any surrounding object within a 250-foot radius. The DOE also recommends that the tower be located on at least one acre of land, which rules out most city dwellers.

Besides, many local laws prohibit the construction of towers or tall structures. After years of deliberation by the town council, residents of the town of Islip on Long Island, N.Y., recently received guidelines for installing personal windmills: they cannot exceed 45 feet in height, sit close to the property line, or be louder than normal car traffic.

Show me the power

The deciding factor, however, has to be how much electricity you can actually generate. A small wind generator that you might put in a backyard might have a capacity of about one kilowatt. An average annual wind speed of nine mph would produce more than 200 kilowatt hours of electricity per year, and average wind speeds of 14 mph could produce more than 600 kilowatt hours per year. That sounds good until you realize that the average household in the United States uses about 10,000 kilowatt-hours per year. Even in a very gusty location, you'd need about 17 small wind turbines just to power a single home!

The larger the blades and the greater the wind speed, the more electrical output a wind turbine can generate. One large, five-megawatt windmill can produce 15,000,000 kilowatt hours per year, or enough to power 150 homes. We often don't appreciate just how large these wind power plants are, probably because we often see them from far away—that five-megawatt windmill would stand almost 400 feet tall, or almost 100 feet taller than the Statue of Liberty, plus its pedestal, plus its base! When it comes to windmills, there is certainly an economy of scale, where disproportionately more energy is generated from increases in size and wind speed. Put another way, a doubling of wind speed leads to an eight-fold increase in power available to the wind generator.

This economy of scale also factors into the financial and energetic cost of manufacturing small windmills. Energy outputs from small turbines are low, making both the cost of energy and cost of producing the turbine high. In 2008, the Carbon Trust in the United Kingdom released a study showing that due to this low energy output, small turbines are actually net carbon emitters.

Therefore, for most people, putting up a small windmill in the backyard would do as much good for energy generation as putting a solar panel in the shed. Nevertheless, it may still make sense for some individual homeowners, especially if the setting is rural. Luckily, there are several companies that specialize in commercial windmills. Here are some examples of companies and the specifications that vary for small (10-kilowatt or less) turbines.

While small wind may never become mainstream, there is great potential in wind as a local and community-scale renewable, clean energy source. In fact, the DOE has called for increasing wind energy's contribution to the nation's electricity supply to 20 percent by 2030. While the energy generated from wind increases significantly each year, in 2007 wind produced only 0.8 percent of the nation's electricity. Obstacles to meeting the DOE goal right now are not technological but related to infrastructure: the challenge of transmitting clean energy from consistently breezy wind farms to people's homes that may be hundreds of miles away. (People, after all, do not often choose to live in the windiest parts of the country's windiest regions.)

For more information, there is a plethora of resources on the Internet. "Small wind" is the search term to use. For starters, the American Wind Energy Association is the self-proclaimed hub of the wind energy industry.

Rachel Adams is a PhD candidate in biology.

How grad school let Elif Batuman indulge her passion for Russian novels and find a voice of her own.