Cardinal women were flawless till the final. 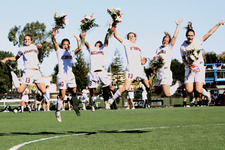 Almost perfect. Those are the bittersweet words that sum up an exhilarating season for the Stanford women's soccer team. Only a 1-0 loss to North Carolina in the NCAA championship game derailed a dream season.

The Cardinal women went into the team's first NCAA soccer final—played at College Station, Texas—with a 25-0 record, bidding to become the only school other than North Carolina to complete an undefeated season. But the challenge was steep, not only because of the competition, but also because a stomach flu hit several players in the day between a semifinal, 2-1 overtime win against UCLA and the title match. Among those afflicted was senior Kelley O'Hara, the nation's top scorer.

North Carolina, which scored at just 2:50 into the game, was the only opponent during the season to outshoot Stanford (19-9). Stanford put the ball in the net twice, but both shots were disallowed on offside calls. O'Hara was ejected from the game in the 73rd minute on a second yellow card after a tackle from behind, a call Stanford coach Paul Ratcliffe characterized as "harsh."

Despite the loss, the team rewrote the Cardinal record book in numerous ways this season, including most wins (previous best was 22 in 2008) and longest unbeaten streak (18 in 1993-94).

O'Hara finished her college career with single-season records of 26 goals and 65 points, topping 1993 marks of 20 and 48 by Sarah Rafanelli, '94. Junior Christen Press, who scored the winning goal against UCLA, had 21 goals on the season.

O'Hara's career total of 57 goals puts her second on the all-time Stanford list.