Back to the World of Ideas 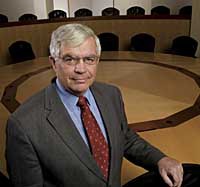 My last day on the job as head of the international division at Treasury began in the White House Situation Room. It was Friday morning, April 22, 2005. I was there to report to President Bush and the National Security Council on the financial situation in Iraq. With responsibilities for currency markets, resolving financial crises, and, since 9-11, inhibiting the flow of money to terror organizations, I had confronted a new adventure every day for the past four years. I had attended more than 400 meetings in the White House, was responsible for managing 350 finance experts and staff and had made 120 trips to foreign countries—including three to Iraq, where I was responsible for implementing our plan for a new currency and central bank. That was the subject of that Friday morning NSC meeting.

“Financial conditions remain good,” I began. “We were concerned about an uptick in inflation late last year, but we worked with the Central Bank and that episode now seems behind us for the time being. The new Iraqi currency remains strong and stable.” The President listened and commented that things had worked out pretty well in the finance area. As the meeting broke up, he thanked me for serving on his team and offered to have me and my family to the Oval Office to say goodbye. “So have you decided what’s next?” he asked.

“I’m going back to Stanford,” I said, and noted that I would be giving a lecture at the Hoover Institution the following Monday on what we had accomplished. Previous holders of my job had gone on to work at Citigroup, Credit Suisse First Boston and other financial institutions—but as with my three earlier stints in government I planned to return to academia.

As rewarding as I found my job at the center of Washington policy making, I was looking forward to teaching, writing, doing research. It would give me the opportunity to mull over new ideas, analyze issues in depth, and have long discussions, or a whole course’s worth of discussions, with students about, say, a new theory on financial crises. I didn’t have time for that during my tenure in Washington.

Coming back also would give me a chance to apply my experiences to my research and teaching. When I re-entered Stanford the last time—in 1991 after two years on President George H.W. Bush’s Council of Economic Advisers—I did research on a simple formula to guide interest-rate decisions at the Federal Reserve. After a while people started calling it the “Taylor Rule.” I doubt I would have had that idea without the CEA experience.

I knew that re-entry to academia this time would not be easy. I had been away longer, and each time I had come back in the past I acquired a greater respect for people in universities. Academic work is difficult to do well. Whereas policy makers deal with pressing questions like, “What should we do today to prevent the Argentina financial crisis from spreading around the world?” academics must generate their own work agenda. Deciding what idea to work on is up for grabs each day, with plenty of blind alleys to watch out for, and if you are not careful you’ll find yourself staring at the ceiling.

The trick to a successful re-entry, in my experience, is to start immediately on a feasible project that can be done in a reasonably short time. Later, with your analytical skills tuned up, you can take on riskier research endeavors. If you choose a risky project too soon, you will spin your wheels and accomplish nothing.

When I came back in 1991, for example, I immediately began teaching the introductory economics course—Econ 1—and writing a new introductory economics text. That created a synergy between teaching and writing, and brought my Washington experiences into the classroom. Not only did I finish the book, I discovered it was very rewarding to find new ways to teach important, complicated economic ideas to beginning students. You’d be surprised what you can teach if you recognize that different students learn in different ways, listen patiently to their questions, and provide more explanation when needed. I enjoyed mixing entertainment with teaching in Econ 1 if it helped students understand or remember the material. Stanford alumni still tell me they recall when I dressed up as a pumpkin or a raisin to illustrate some supply or demand concept. I hope they remember the concept, too. Tiger Woods, ’98, took the course; he learned opportunity costs, and then joined the pro tour.

So what should I do this time, coming back in 2005? Some said I should develop a Taylor Rule II, but that was a joke, and delving into that subject would take a while given all the newly written papers. Instead I decided to write a book—a first-person account of policy making—and teach a course in international economics. I volunteered to teach Economics 169—International Financial Markets and Monetary Institutions—a perfect match for my plans.

I will never forget the first day in Economics 169. After years away and weeks of preparation, I was raring to go. I expected a class of about 30, but only two students showed up. I started lecturing to the two students, trying to sound positive, but my feelings sank with each sentence. I knew, with a tiny enrollment, I would have to cancel the course—and my re-entry plan. After about 30 minutes, however, a large group of students showed up. The night before, the location of the class had been changed via a new automatic online scheduling system, which had failed to notify me (and the two students, I suppose). Everyone else was in the other room! I realized that getting used to new technology would be another hurdle to re-entry. I had a similar realization when a student in another course raised his hand and said “Professor Taylor, that equation should have a plus sign where you put a minus sign.” When I asked how he knew, he replied that he had looked it up on the Internet on the wireless laptop he was using.

Econ 169 was a success. In one lecture I invited my former German counterpart, Caio Koch-Weser, to join me. He had been an adversary, along with the French and Russians, in the Iraq debt negotiations in 2004, and had recently left government to become vice chairman of Deutsche Bank. The French, Germans and Russians had wanted to forgive only 50 percent of the debt, well below the 80 percent the United States favored. In that lecture, I revealed to Caio for the first time that the United States’s negotiating strategy was to hold firm for 95 percent until the very end, hoping that we would split the opposition and get our goal of 80 percent, which we did. Caio then revealed his own inside story about the disagreements between the Germans and French. The students put us both on the spot, asking for examples about how we could present one number internally and another externally. We all loved that lecture, nearly as rewarding to me as the actual negotiations.

Another rewarding part of the course was explaining what policies worked and why. I did this partly through stories. In one, I described the logistical challenge of supplying a country with a new currency—the Iraqi dinar. The money—enough to fill 27 cargo jets—was printed at seven different plants around the world and then distributed at 250 locations around the country. To illustrate the importance of having a clear objective and creating a team of people dedicated to meeting it, I shared the experience from my first trip to Baghdad on the night of June 15, 2003. I was hoping to bolster the confidence of my financial team and to finalize our plans for a new currency. It was a short flight on a C-130 military transport plane from Kuwait. I was wearing a dark blue suit, a white shirt and tie, and black street shoes, and was carrying my clothes in a small garment bag. Most of the other people on the plane were soldiers and Marines wearing camouflage uniforms.

My financial team—working at Saddam’s old palace in Baghdad—had arranged for a security detail to pick us up at the airport, but when I walked off the rear of the C-130 onto the tarmac in the dark, there was no escort. We trudged to a makeshift terminal—a large tent-like structure with about 100 soldiers inside sleeping on cots. I then learned that security conditions on the Baghdad airport road had suddenly turned for the worse and the security detail could not come until daylight. With all the cots taken, the only thing to do was sleep on the floor. My travel bag came in handy as a sleeping mat. I folded up my suit jacket for a pillow and went to sleep. By morning the light brown sand and dust from the floor had made a mess out of my dark blue suit. I would be looking pretty grungy at my crucial meetings later that morning.

In the end my unusual arrival in Baghdad may have been a blessing in disguise. Not many people in Baghdad were wearing suits anyway, so I could take off my jacket and only my blue pants would show the evidence of my mishap. Later my team told me that making the effort to go to Iraq at that time was important for morale, and my unusual first night showed that I too could put up with a little hardship. They had put up with much more. And my visit reminded our military and political people in Iraq how serious I was about our plan to print a new currency for Iraq. For the students in Economics 169, the story was a memorable lesson in how economic plans are implemented.

Another policy success we discussed in the course was the post-9-11 effort to freeze and follow terrorists’ money through the financial system. This required a great deal of international cooperation because the financial system is truly global. In this case, 172 countries agreed to follow the U.S. lead, and $137 million was frozen in just the first few months after 9-11. The 9-11 Commission gave the work on terrorist financing its top grade, an A-, among a sea of Ds and Fs. Again, the key to success was a clear mission and a dedicated team of experts devoted to it. Encouraged by the student interest in these stories, I decided to include all of them in my new book, along with many others, such as reforms at the International Monetary Fund and the World Bank and preventing Argentina’s financial crisis from sending the global economy into a tailspin. While teaching the course, I began to realize that these financial issues were some of the most successful parts of the war on terror. I called the book Global Financial Warriors in honor of the ingenious and determined people on the financial front lines.

All this reminds me that while coming back is good, I miss certain aspects of that policy job. I enjoyed running things, implementing ideas, achieving some successes. Creating ideas is what we do at Stanford; implementing ideas is what you do in policy jobs. I am now trying to focus more of my academic research on implementation, which is just as risky an endeavor as developing the ideas.

JOHN B. TAYLOR, PhD ’73, is Mary and Robert Raymond Professor of Economics and the Bowen H. and Janice Arthur McCoy Senior Fellow at the Hoover Institution, and winner of both the Hoagland Prize and Rhodes Prize for undergraduate teaching. He served as treasury undersecretary for international affairs from 2001 to 2005. Global Financial Warriors is being published in January by W. W. Norton.

For the Love of Raptors

The Team That Changed the Game