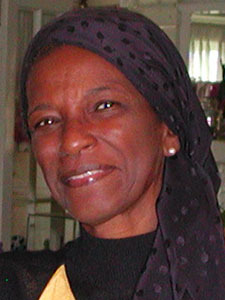 One of nine children born in rural Ponca City, Okla., to a mother whose family had worked as cotton pickers, Joyce Thomas drew on a background of hardship and discrimination against blacks to craft poetry, plays and, most notably, children’s fiction. Throughout her life, she was committed to education, social justice and, according to her sister, Flora Krasnovsky, making African-Americans feel “needed and wanted.”

Joyce Carol Thomas, MA ’67, died on August 13 from cirrhosis of the liver caused by hepatitis C, which she contracted years earlier from a blood transfusion. She was 78.

After moving to California at the age of 10, Thomas learned Spanish from Mexican migrant workers. She went on to study Spanish at San Jose State College (now San Jose State U.) before earning her master’s degree in education from Stanford. A teacher at the U. of Tennessee, Purdue U. and elsewhere, she launched her writing career with Marked by Fire, a coming-of-age novel about Abyssinia Jackson, a poor black girl in Ponca City whose life is plagued by rape, abandonment and natural disaster. Yet Thomas endows her with strength and resilience, creating a protagonist who draws on the support of friends, family, faith and her community to overcome adversity. The novel, a winner of the National Book Award for children’s fiction in 1983, was adapted into a Broadway musical and followed by a sequel, Bright Shadow, in 1984.

Thomas published more than 35 books, including two illustrated poetry collections, The Blacker the Berry and Brown Honey in Broomwheat Tea. In 1998, she told the African American Review that she dedicated much of her work to showing young readers a version of life seldom revealed by books prior to that point.

Krasnovsky recalls, “Every year for Christmas, we were given dolls—white dolls—and every year, Joyce would give her doll to me.
I have photos of myself holding two dolls; Joyce was acutely aware that the doll did not represent her accurately. While my mother was uneducated, we were brought up to believe that we could do anything we set out to do. We had two aunts who were schoolteachers, and they had a lot of influence on our lives. Joyce didn’t care about her success as a writer; she simply wanted to say what she felt people needed to hear.”

In addition to her writing and teaching, Thomas delivered workshops, lectures and seminars around the world as a motivational speaker. Married and divorced three times, she is survived by her sister; a daughter from her first marriage, Monica Pecot; two sons from her second marriage, Gregory and Michael Withers; a son from her third marriage, Roy T. Thomas III; seven grandchildren; and two great-grandchildren.