At Memorial Church, Weddings are Down but Diversity Is Up

Cultural trends have reduced the number of ceremonies, but Stanford's iconic chapel remains a prized venue. 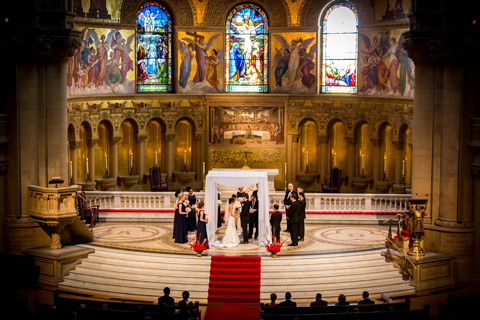 In January, Stanford’s new wedding coordinator, Dawn Billman, got a taste of how eager many couples are to say “I do” in Memorial Church.

The holidays are prime time for engagements, and the church opens its wedding calendar in January for the following year — 2019, in this case — prompting a flurry of activity. “When I came back from winter break, I was a little overwhelmed by the number of emails,” Billman says.

Still, tales about how difficult it is to get married in MemChu are exaggerated. “That’s a myth I’d like to break,” she says. In February, for example, there were still slots available for this summer.

Getting married at MemChu is, in fact, less popular than it once was. In 1988, more than 180 couples tied the knot under the church’s dome. Three decades later, the annual average is about 80, says Joanne Sanders, associate dean for religious life. MemChu isn’t immune to broader societal trends. “People aren’t doing church weddings as much,” she says.

Weddings have been part of Memorial Church since its beginning. Ethel Rhodes and William Holt, both Class of 1902, were first down the aisle, on February 22, 1903, a month after the building’s dedication.

The church holds 1,200 people, but even two-time Olympic gold medalist and football star Bob Mathias, ’53, and his first wife, Melba Wiser, ’53, didn’t test that limit. Mathias and Wiser made national news when they wed in 1953 in front of 800 people, only 600 of whom had reportedly been invited.

Perhaps the most observed Stanford wedding was of sophomore Peggy Rusk and Guy Smith, in 1967. He was black and an Army officer. She was white and the daughter of then–Secretary of State Dean Rusk. Their wedding came on the heels of the Supreme Court decision striking down bans on interracial marriage, and Time turned the “marriage of enlightenment” into its cover story.

In 1993, ninety years after the first wedding, Memorial Church had its first same-sex commitment ceremony, when Terry Allen, MBA ’93, exchanged vows with Jason Rouman. It was the first such ceremony in any chapel of any major university in the United States. The first legal gay wedding in the church occurred on November 1, 2008, between Alan Ziegler and LeRoy Fitzwater, MS ’98, PhD ’03, two weeks before California voters banned gay marriage (a prohibition later overturned by the courts).

Hired in October, Billman has yet to see many colorful requests, but her predecessor, Melissa Prestinario, recounts plenty, including a bride with an injured leg who wanted to be carried in on a chariot, a couple who asked to transport the toddler ring bearer in a remote-controlled car and a photographer who wanted a drone inside the church. The request was denied. “Yeah, you’re going to crash into a quarter-million-dollar window,” Prestinario says. “We don’t think so.”

Sanders, the associate dean, who regularly officiates weddings, says a full Saturday of four services can be taxing, but performing a marriage is always a sacred duty. “It’s a privilege to sit with people and be part of this day with them.”

Faculty weigh in on why we're so polarized.