And the Band Played On

No wonder the Play made Big Game famous. Where else would you find a Heisman hopeful, two miracle comebacks and a trombonist in the end zone? 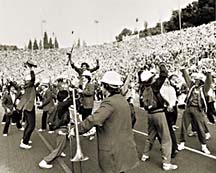 When he was a football player at Cal, Kevin Moen had an opinion of Stanford Band members similar to that of most people from Berkeley: “I thought they were a bunch of flakes.” Until he ran into one.

His name was Gary Tyrrell, a trombonist and engineering major who wound up on the Memorial Stadium turf after Moen plowed into him in the end zone on November 20, 1982. The famous collision has become the most enduring image of “the Play,” in which a desperate Cal team, trailing 20-19, returned a kickoff and lateraled its way through the Stanford team—and Band—to defeat Stanford as time expired. In those frenetic few seconds, lives were changed, dreams were made and dashed, the Big Game was put on the national sports map, and two men were forever linked in Cal-Stanford lore.

Tyrrell, ’83, and Moen have shared countless appearances on the rubber-chicken circuit since college, both of them rehashing the Play over and over. They have developed successful careers and matured into middle age, but haven’t outgrown the reach of that ridiculous finish two decades past. “There’ve been a few months over the last 20 years in which this hasn’t come up—but they are usually not consecutive,” says Tyrrell with a grin. “Basically, I peaked when I was 21 years old—it’s been downhill ever since.”

Today, Tyrrell lives in Half Moon Bay, Calif., and is the chief financial officer for the Woodside Fund, an early-stage venture capital company. His dented trombone resides in the College Football Hall of Fame in South Bend, Ind.

He still enjoys his role as a principal in the Play. He once showed up at a Big Game luncheon wearing a neck brace, a not-so-subtle reference to the end zone body flop that has appeared on television highlight shows hundreds of times.

And, unexpectedly, he and Moen have become friends. “In getting to know Gary over the last 20 years, I have found him to be a nice, diligent, normal guy,” says Moen, now a real estate broker in Rolling Hills Estates, Calif.

The friendship has even changed Tyrrell’s attitude toward Cal. “I feel a real bond with Kevin,” he says. “He is a class act and a true gentleman. He has given me a much more favorable impression of Berkeley folks.”

To say that attitude is universal would be stretching it. Twenty years later, the Play still rankles some Stanford fans, who see it as an injustice that damaged careers and left the Cardinal football program in shambles. And don’t ever go there with a Bear backer. They bring this game into a conversation as frequently as possible—predictable, perhaps, since Cal has lost 14 of the 19 Big Games since.

But others have grown more sanguine about it, and the Play’s quirky cachet—it is widely considered the most famous play in college football history—has even inspired a gentle embrace by some Stanford supporters. Donald Kennedy, who was the president of Stanford in 1982 and a spectator at the game, is among them.

“In retrospect, I realize this was one of the great things that occasionally happen in college sports,” he says. “That is, every once in a while something happens that reminds you that this isn’t the National Football League. Instead, this is a game conducted largely by 19- and 20-year-olds, and every once in a while something marvelously unexpected happens. Of course, I think it would have been lovely if it happened to someone else, but the fact that it happened to us doesn’t make it anything awful—in fact, I think it was sort of neat.”

Here, on the 20th anniversary of that fateful day, let the arguments resume.

Even before the Play occurred, the 85th Big Game was one of the most exciting ever. The lead had changed hands several times when Stanford quarterback John Elway, ’83, led the Cardinal onto the field with 1:27 remaining in the fourth quarter, trailing 19-17. This was Elway’s chance to put an exclamation point on a storied college career. He had thrown 77 touchdown passes in his four seasons (still a school record), including six in one game against Oregon State in 1980. Along with Georgia running back Herschel Walker, he was a leading candidate for the Heisman Trophy.

After a seven-yard loss and two incomplete passes, the Cardinal faced fourth down and 17 on its own 13-yard line with less than a minute to play. Stanford fans still remember the thrill of watching as Elway then completed two long passes, followed by a 21-yard run by senior Mike Dotterer, moving the ball all the way to the Bears’ 18-yard line and in position to win the game. But with the clock winding down, Elway made what at the time seemed an insignificant mental error: he called timeout with 8 seconds remaining. This guaranteed that the game would not end with Stanford’s ensuing field-goal attempt. Yet when kicker Mark Harmon drilled a 35-yard field goal a moment later to put Stanford ahead, 20-19, he recalls thinking, “I just won the Big Game!”

In the back of the end zone on the other end of the field, the Stanford Band was going nuts. “We started playing ‘All Right Now,’ as usual, and it was just wild, joyous mayhem,” recalls Tyrrell.

But the game clock had four seconds remaining.

Stanford was penalized 15 yards because several players from the sidelines ran onto the field to celebrate after Harmon’s kick. It meant that Cal needed to cover less ground on the return.

Harmon, ’85, kicked off from the 25-yard line, squibbing the ball on the ground to make it more difficult to handle. Moen gathered it in at the Cal 46 and threw an overhand lateral to Richard Rodgers, who was standing a few yards to his left. That set in motion a series of impromptu pitchbacks—to Dwight Garner, back to Rodgers, to Mariet Ford, and finally to Moen again. Moen negotiated the last few yards through a sea of confused Stanford Band members, who had run onto the field prematurely, and punctuated the touchdown by sending Tyrrell and his trombone flying. But to this day, anyone remotely connected with Stanford will insist that Moen’s serpentine sprint to the end zone should have been irrelevant because Garner was down way back near midfield before he tossed the ball away. “The guy lateraled from his knees,” flatly states Andy Geiger, who was then Stanford’s athletics director.

By the time Moen reached the end zone, Band members were spread out across the playing field and nobody, not even the officials, was sure what had happened. Tyrrell knew one thing: he got hammered. “I remember looking up at the clock, and I turned to watch all kinds of folks rushing onto the field. . . . I turned around again to find our drum major, and that’s when I got plowed over,” he recalls. “It looked bad, but it really didn’t hurt. I bounced off the Astroturf, picked up my hat and my music, and just kept playing.”

The Stanford coaching staff vociferously argued that Garner’s knee had been down and the play was dead. However, after head official Charles Moffett conferred with the other referees, they unanimously ruled that the touchdown counted. Cal had won, 25-20.

“You would have thought I had started World War III,” says Moffett, who, coincidentally, was officiating his last game.

Stunned, Stanford players, fans and coaches at first refused to believe it. Harmon, the kicker, recalls thinking, “There’s no way this can stand.” But stand it did.

It was probably the most painful moment in the history of Stanford athletics. As Cardinal faithful watched, incredulous, the Bears paraded around Memorial Stadium with the Axe, and thousands of Cal fans celebrated on the field. In the Stanford locker room, players wept.

“I was incredibly angry right after the game; then I was just numb,” recalls Ken Williams, ’86, who was a freshman wide receiver.

Stanford had been on the verge of being invited to the Hall of Fame Bowl, but seconds after the Play transpired, a bowl official found Geiger and said, “Sorry.” For Elway, the loss was especially gruesome. “This is not how I wanted my career to end,” he told a reporter. And, according to Geiger, “that game cost John the Heisman Trophy,” which went to Walker instead.

Elway, who went on to a brilliant NFL career that included five Super Bowl appearances, has come to terms with the Play. When he was inducted into the College Football Hall of Fame last year, he conceded that, although the Play hurt at the time, “each year it gets a little funnier.” Then he added: “We just wish we had the Band come out for some tackling practice.”

The Play’s repercussions didn’t end with the controversy surrounding it. Still devastated by the loss, the Cardinal went 1-10 the next season, after which head coach Paul Wiggin was fired. And critics rained down contempt on the Band, whom some blamed for the defeat. Geiger, now athletics director at Ohio State, didn’t go that far, but he calls the Band undisciplined. “Although the Band did not cause the Play,” he says, “it was typical that they would have been in the wrong place at the wrong time.” (The Play also launched a Band tradition: every year, the new student bandleader officially takes over with 4 seconds left in the Big Game.)

At least Stanford managed to extract some revenge. Four days after the game, the Stanford Daily produced fake editions of the Daily Californian and delivered them to the Cal campus in the middle of the night. Students arrived the next morning to the blaring headline, “NCAA Awards Big Game to Stanford.”

In the years following the Play, Tyrrell was an outcast on the Stanford campus. “I was treated like a black sheep, a black mark,” he says. “The Band and I were blamed for losing the game. That was a big burden.”

But over the years, as some of the wounds began to heal and the 1982 Big Game gained historical luster, that animosity has dissipated. “Recently, I’ve been welcomed back into the circle,” Tyrrell says. “I now have what you would call emeritus status in the trombone section of the Band.”

While Cal’s take on the game has remained virtually unchanged over the years (you can still buy T-shirts at the campus bookstore that show a diagram of the Play), the predominant Stanford perspective has undergone a slow transformation, from anger to bemused resignation to a sort of twisted pride—and finally, to indifference.

“We all know about it—Coach [Tyrone] Willingham would show a clip of the Play every year before the Big Game—but nobody around here really talks about it anymore,” says senior Matt Leonard, a defensive tackle for the Cardinal. “That was a generation ago.”

Cal will make a big deal of the 20th anniversary. Footage of the Play appears in a new TV commercial trying to woo ticket buyers, and KGO, the radio station that broadcasts Bears games, was already running promos about it in mid-September. Stanford’s acknowledgment, if there is one, will be low-key but good-natured, say athletics officials.

For Tyrrell and Moen, the Play is never far away. Of course, they have no choice. As the 20th anniversary approaches, they have been inundated with interview requests.

“On a day-to-day level, this hasn’t changed my life, but it certainly has had its impact,” says Tyrrell. “It’s taught me to truly appreciate how special the Stanford-Cal rivalry is. And it’s given me this friendship with Kevin. We were part of an event that was bigger than both of us.”

Jackie Krentzman is a Bay Area writer and editor.