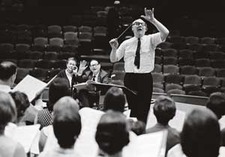 Standing before a mirror in my dorm room in Lagunita Court to practice conducting "How Lovely Are Thy Dwellings" from Brahms's German Requiem on a 78 rpm record, I never dreamed that 50 years later I actually would conduct that number with a church choir's 45 voices. But I recognized even then that the choral conducting and music history courses I took from Professor Harold Schmidt had made my years at Stanford memorable.

All of the music department professors took an interest in their students and I remember all of them fondly, but Harold Schmidt made his students feel special in many different ways. He invited members of the chorus and choir to his home on Santa Teresa Street for Gilbert and Sullivan sing-alongs. In exchange for occasional babysitting, he provided tickets to San Francisco Symphony performances along with transportation (not many girls had cars on campus in those days). We were thrilled when he arranged for the Stanford chorus to sing Beethoven's Ninth with the symphony and conductor Pierre Monteux in the City.

The wonderful variety of music we sang in the Stanford choir on Sundays, from Palestrina and Bach to Randall Thompson, has influenced my choice of repertoire for my choir over many years. Professor Schmidt was an enthusiastic supporter of the annual Spring Sing in Frost Amphitheater, and one of my lasting memories is of directing Lagunita girls dressed in peasant outfits singing "Play Gypsies, Dance Gypsies." As one of the judges, he gave us an honorable mention.

Trails out of School

Giving It Their Best Shot

On the golf tour,