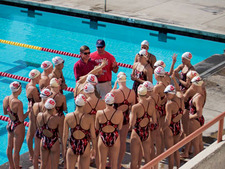 Richard Quick, a commanding presence in American collegiate and Olympic swimming who coached Cardinal women's varsity teams from 1988 to 2005, died June 10 in Austin, Texas, from an inoperable brain tumor. He was 66.

Over the course of his career Quick led teams to a record-breaking 13 NCAA titles, seven at Stanford. The Cardinal went 123-10 in dual meets during his 17 seasons. He coached six successive summer Olympic Games, three as head coach, and his athletes brought home 59 Olympic medals.

Swimmers and colleagues remember a man of almost boundless energy and passion, pointing to his preternatural cheerfulness at 6 a.m. practices. Strolling onto the pool deck singing a country song full volume, he would call, "Let's go swimmin', women!" Quick's legendary enthusiasm erupted at competitions. "He would always yell with his whole body—jumping up and down, acting like a crazy man whenever one of his swimmers was having a particularly exciting race," Olympian Tara Kirk, '04, MA '05, recollected by email. "I've even heard it said that someone once heard him on a clear morning all the way from the post office."

"He had more energy than any of us," says U.S. national champion and Olympic gold medalist Dara Torres, whom Quick coached at four Olympiads.

Quick's motto—"Believe in belief"—embodied the philosophy and style that his swimmers say made him so effective. "He'd look you in the eye and tell you that you could do it, and he was so genuine and passionate that you'd start to believe it yourself," says All-American NCAA champion Jessica Foschi, '02. "I think that was his gift as a coach."

"My granddad," wrote his granddaughter Emily in the last few weeks of his life, "helps me realize that your heart always has the will to fight."

Foschi, Torres, and others also remember his enthusiasm for innovation. "People would say, 'Oh, there's the women's swim team doing another crazy thing out in the field,'" Foschi recounts, laughing. "We were out there doing wheelbarrows, pulling each other on sleds, climbing ropes, some sort of weird yoga. He was always trying cutting-edge things because he believed that's where improvements could be found. He'd have us do it at 100 percent, then analyze whether it was working."

Quick is survived by his wife, June; his children, Michael, Kathy, Tiffany and Benjamin; and his grandchildren, Blake and Emily.