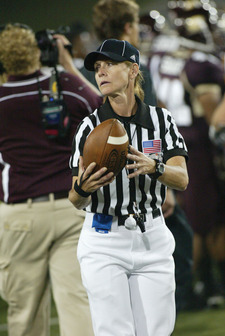 At 5-feet-6 and 130 pounds, Terri Valenti is hardly a match for bulky professional football players. Yet her knowledge of the game's rules and procedures puts her alongside them on the field, where she was the first woman to referee a pro football game in the United States.

In 2009, Valenti began officiating in the United Football League. Earlier this year, she became the first woman among 73 officials in the Arena Football League. Only the National Football League remains—and NFL Commissioner Roger Goodell has addressed that possibility, referencing Valenti, although not by name. "We actually have two officials that are females that are I think right on the edge of becoming NFL officials," he said last season. "I think that it could happen very soon. And I think it's a good thing for our sport."

Palo Alto resident Valenti, 50, is a former engineer who began officiating in 1999 at youth football games. She grew up in Plantation, Fla.—one of five children, a gifted student, a track star and a high school drum major. ("You have to be a leader," Rae Dowling says of her sister's earlier role on the gridiron. "And you have to be able to march while giving instructions, understand where everybody is supposed to be, and coordinate the marching as well as the music.") While she and her husband, Doug Valenti, MBA '91, were grad students, they played on an intramural football team.

Valenti, who has worked at both Kent State University and Menlo College, says watching live or televised football games has been a lifelong passion. While some of her five sons (now age 13 to 27) were playing in the Pop Warner league, she joined the football associations that trained her to be an official.

The hardest part of the job isn't about being a woman in the male-dominated sport. "There's limited backlash for being female," she says. "During the game, I'm just like anybody else. Half of the stadium loves you, and half of the stadium hates you."

The biggest challenge is gaining experience. "You can learn the rules and the mechanics, but as an official, you've got to apply the right judgment for the situation." She believes refereeing as often as possible is critical. Among AFL, UFL and college matches (although not Pac-12 ones), Valenti works about 45 games a year.

Most often she is positioned on the line of scrimmage. Flank officials are responsible for calling a variety of fouls, including offsides, false starts, illegal formations, or illegal shifts (when two or more offensive players illegally move at the snap of the ball). "You learn where to stand [to stay out of harm's way] and how to move with the plays."

Valenti applied to the NFL about six years ago, starting the process in which the league watches officials for a shot in the bigs. Valenti is proud to be mentoring another woman who is working her way up the referee ladder. "I love being out on that football field and I love to keep learning."

Larry Upson, a former NFL director of officiating who now serves as UFL vice president of officiating operations, is among her biggest fans. "I think her potential is unlimited." He adds that male UFL colleagues have been very supportive—and for good reason. "The only thing that distinguishes [female officials] from the men is that they have ponytails."

Tracy Seipel is a writer for the San Jose Mercury News.