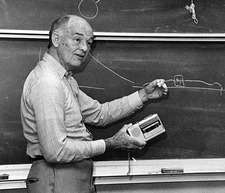 In 1950, a graduate student was monitoring radio waves emitted by distant lightning when strange descending tones came from a speaker. When the student's adviser, Robert Helliwell, heard those whistling noises for himself he was "instantly converted to belief in the reality of a strange new phenomenon." The observation started Helliwell on research that led him from Stanford to Antarctica as he made fundamental discoveries about how radio waves could be used to investigate the atmosphere high above Earth's surface.

Helliwell, '42, Eng '44, PhD '48, an emeritus professor of electrical engineering, died on May 3 in Palo Alto of complications from dementia. He was 90.

"Whistlers," the name given to the very low frequency (VLF) radio waves, shoot past the ionosphere and into the magnetosphere. There, the Earth's magnetic field controls the motions of charged particles, creating channels of ions aligned with the horseshoe-shaped magnetic field lines. These channels trap VLF radio waves.

Helliwell had receivers on campus to detect natural whistlers, but electrical noise from the city power lines interfered with his work. He traveled to Antarctica—a quiet continent—to scout a new research site. He, students and staff built a radio transmitter with a 13-mile-long antenna at Siple Station, located on a mile-thick ice sheet in West Antarctica. The Stanford Radio Science Laboratory conducted experiments at Siple Station from 1971 until it closed in 1988. Graduate students in the VLF Group are still analyzing data from that research.

The professor wrote a classic work, Whistlers and Related Ionospheric Phenomena, and won the Antarctic Service Medal in 1966 and the Appleton Prize of the Royal Society of London in 1972, awarded for distinguished research in ionospheric physics. He is the namesake for the Helliwell Hills, an Antarctic mountain range. Active in his community, he also served as the scoutmaster of Boy Scout Troop 51, founded at Stanford in 1923.

Helliwell married Jean Perham, '47, who became the University's first women's fencing coach; they'd been wed 59 years when she died in 2001. He is survived by his children, Bradley, '65, David, Richard, '70, and Donna, '79; four grandchildren; and one great-grandchild.

Melissae Fellet wrote this article for the Stanford News Service.

She oversees a space where beauty and justice mingle.