From the 17th century, a whimsical timepiece.

Who commemorates those who were wrong? Not the way you are wrong when you add numbers and forget to carry the 1—but fantastically, ebulliently wrong.

Galileo became a hero because he was right. Athanasius Kircher? Until recently, the 17th-century polymath was one of science's neglected giants. He dabbled in history, theology, physics and mechanical inventions, and corresponded in 25 languages, one of them invented. He transcribed birdsong and is credited with founding Egyptology. Yet he was stunningly wrong about magnetism, which is not, as he thought, the force behind the motion of the planets, human relationships and divine love.

A small recreation of the German-born Jesuit's whimsy is ensconced in the Lane Reading Room of Green Library. Kircher's controversial "magnetic clock" mesmerizes visitors with its hand-blown crystal sphere, over a foot in diameter. A hollow three-inch copper globe rotates slowly within it. A band on the globe marks the hours; a cosmic goldfish points the time.

Kircher's Latin inscription adorns a silk banner across the top: Sic mundus pendet et in nullo ponit vestigia fundo. ("Thus the world is suspended, resting its feet on no foundation.") The small globe rests instead on mineral oil within the spellbinding sphere, and is suspended by a thin glass rod.

Kircher, the author of 35 books, was correct in his observations about volcanoes and acoustics but jaw-droppingly wrong when he designed a clock, powered by a sunflower, that was to follow the sun like the blossom does, even when covered or in cloudy conditions. (Descartes expressed skepticism at the time but was not entirely dismissive.) Yet Kircher also invented an early slide projector; a magical talking and eavesdropping automaton that he seated in the town square to startle passersby (it was manipulated with a primitive intercom); a chamber of mirrors; a mechanical singing chicken; and a vomiting machine.

Clearly, he had a sense of humor and an enviable joie de vivre. He even had himself lowered into Mount Vesuvius just as it was due to erupt.

Kircher compared the magnetic clock's action to the "Prime Mover" that rotates the universe. But there's nothing that grand or magical behind it: His design includes a clepsydra, or water clock, hidden in the base to rotate a magnet, which in turn causes a second magnet inside the smaller copper sphere to rotate. 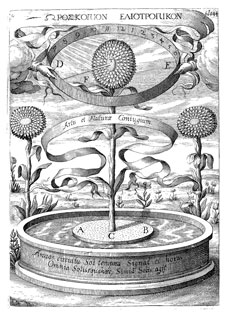 An earlier clock, powered by "occult" magnetic forces, had astonished leading figures throughout Europe, including the painter Peter Paul Rubens. The concept of the clock was marshaled in an effort to vindicate Galileo, by offering new evidence that the Earth rotated by a cosmic magnetic force emanating from the sun. But Galileo broke the spell when he detected the trick by which the clock worked.

Kircher's magnetic clock has been lost. That leaves us with the one artist Caroline Bouguereau made in 2001, with the assistance of Michael John Gorman, now the founding director of the Science Gallery at Trinity College Dublin. The project was commissioned and supported by Stanford University Librarian Michael Keller and Stanford's program in science, technology and society, where Gorman was a lecturer. The University has the largest collection of Kircher first editions in the United States and also hosts Kircher's voluminous correspondence online.

Bouguereau copied a 350-year-old map for the globe. To paint on copper, she used old methods—rubbing the copper with garlic then scratching it to make the paint adhere. She also learned glass blowing. "It's hard to blow a sphere of that dimension with an even thickness," says Bouguereau, now based in Venice.

The final effect is mysterious, like time itself. "We are so used to clock faces and digital representations of time that we have forgotten how strange it is," Bouguereau told Make magazine in 2007. "I think Kircher's machine restores the essential strangeness of time. With Kircher, you never know what to take at face value."

In that spirit, her re-creation doesn't rely on the clepsydra to power the magnets. It has an electric motor, like other modern clocks. You plug it in. Kircher would have loved it.

Cynthia Haven is the associate director of communications for Stanford Libraries.

A young alum thinks money is the key to increasing kidney donations.

The arc of Sidney Rittenberg's life spanned the best and worst of Chinese Communism.