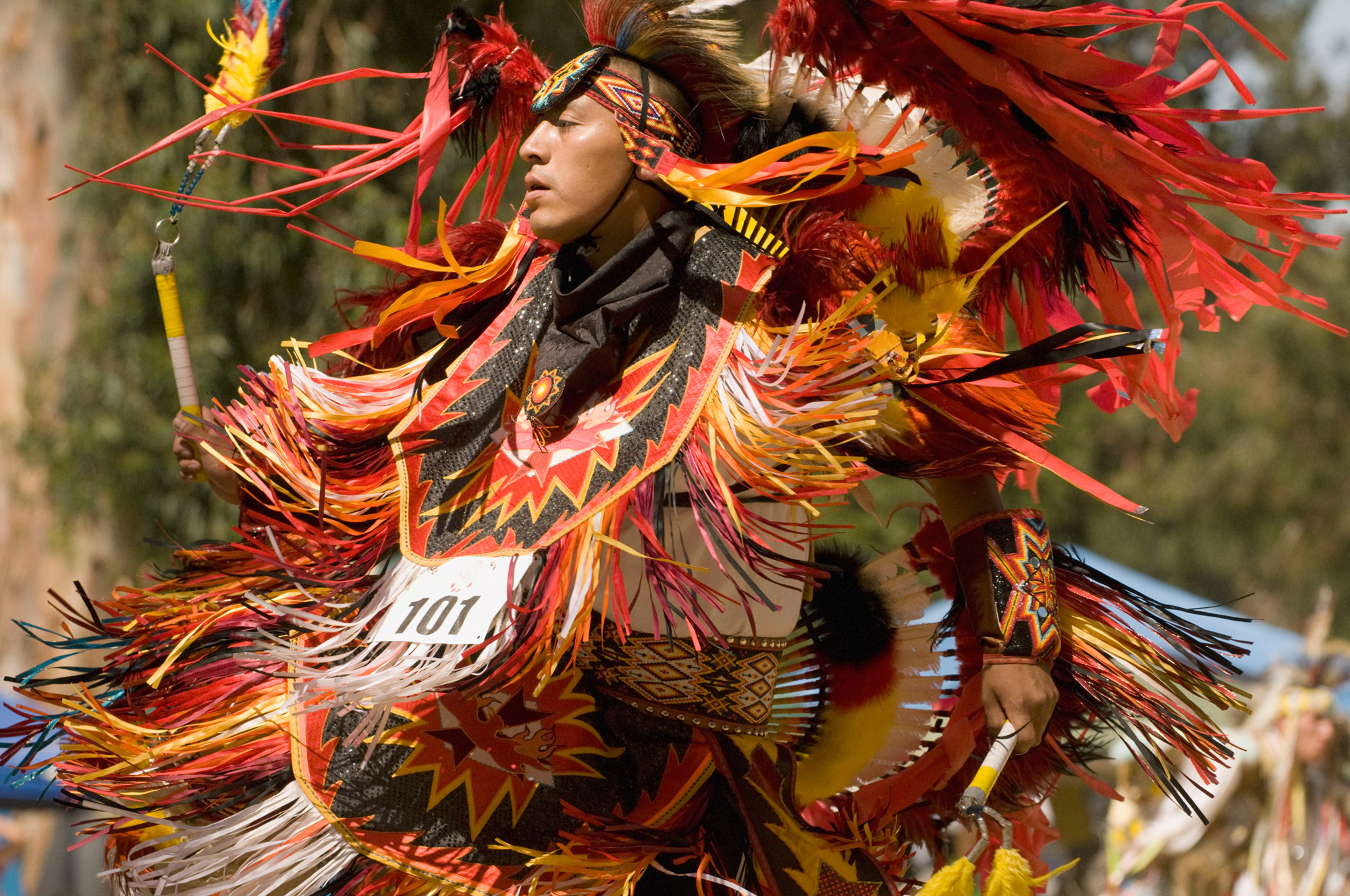 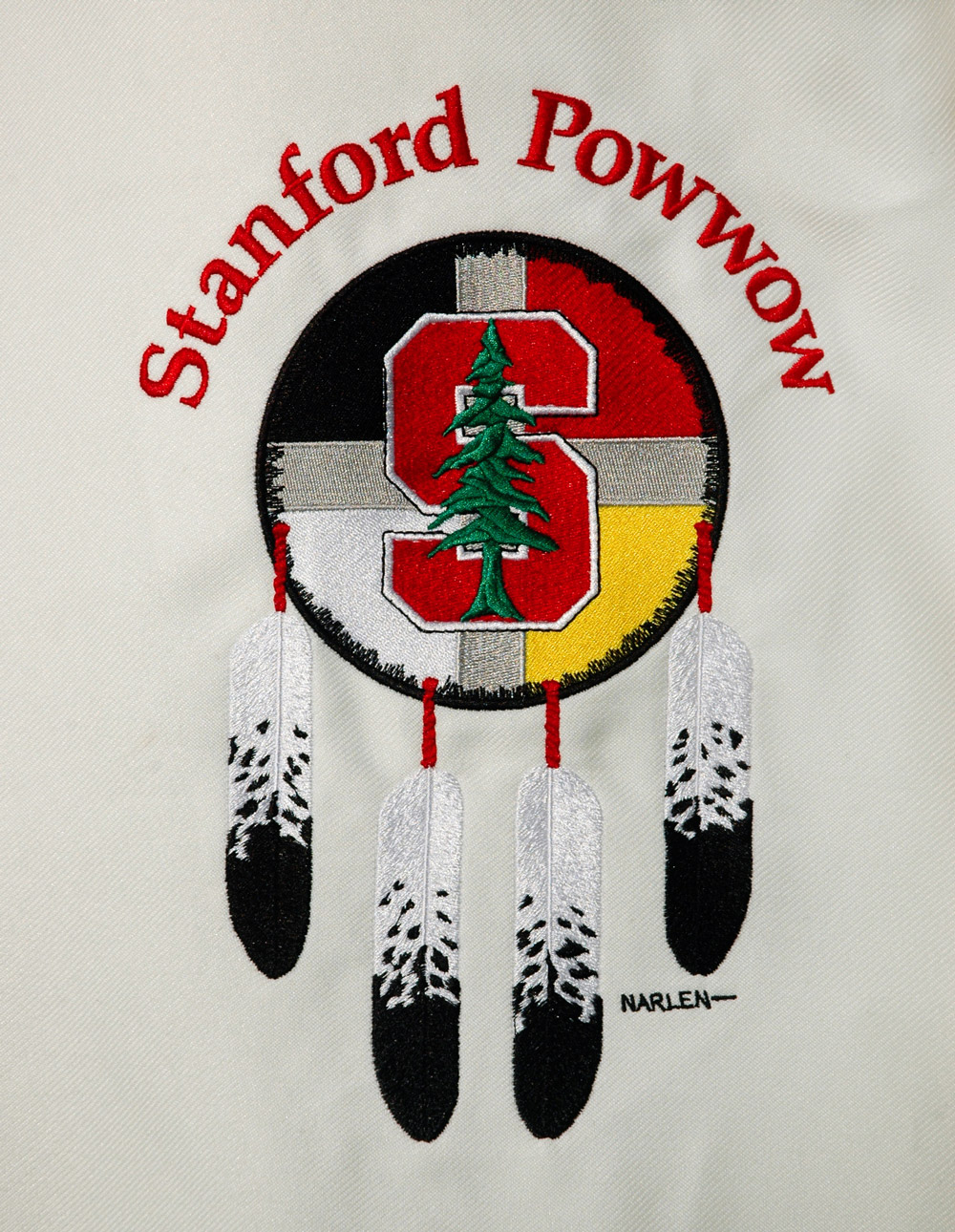 Work on the country’s biggest student-run powwow never really stops. By the time bills are paid, records are closed and everything is put away after the Mother’s Day weekend event, it’s nearly time to start again, says Denni Woodward, associate director of Stanford’s Native American Cultural Center.
‍
But preparations truly pick up after freshmen arrive in the fall, some of whom join the planning committees with only a vague idea of what lies ahead. Often, she says, it’s not until Grand Entry on opening night—as hundreds of dancers in tribal regalia from across the United States and Canada arrive to song and drum—that new students grasp the full picture.

“They’re all just a blubbering mess,” Woodward says. “It’s so powerful. To see that arena full of the dancers you’ve invited and every seat, every bleacher, someone sitting—it’s amazing.” About 50 students work on Stanford Powwow throughout the year, a number that triples as the event nears. Over three days in May, Powwow attracts an estimated 30,000 visitors, about half of whom are Native, Woodward says.

Or so it was for decades. This year, the pandemic forced Stanford Powwow to celebrate its 50th anniversary without the distinctive mix of drum, dance and dust in the eucalyptus grove across from the stadium. The same was true in 2020. But this time, organizers found ways to bring most of Powwow—from dance contests to honor songs to art stands—online.

“All you need is some dirt, frybread and the smell of the eucalyptus trees, and you will have the Stanford Powwow in your home,” says senior Jade Okute Win Goodwill, in her third year as co-chair. “We wanted to keep the people dancing and to keep this event going no matter what.” 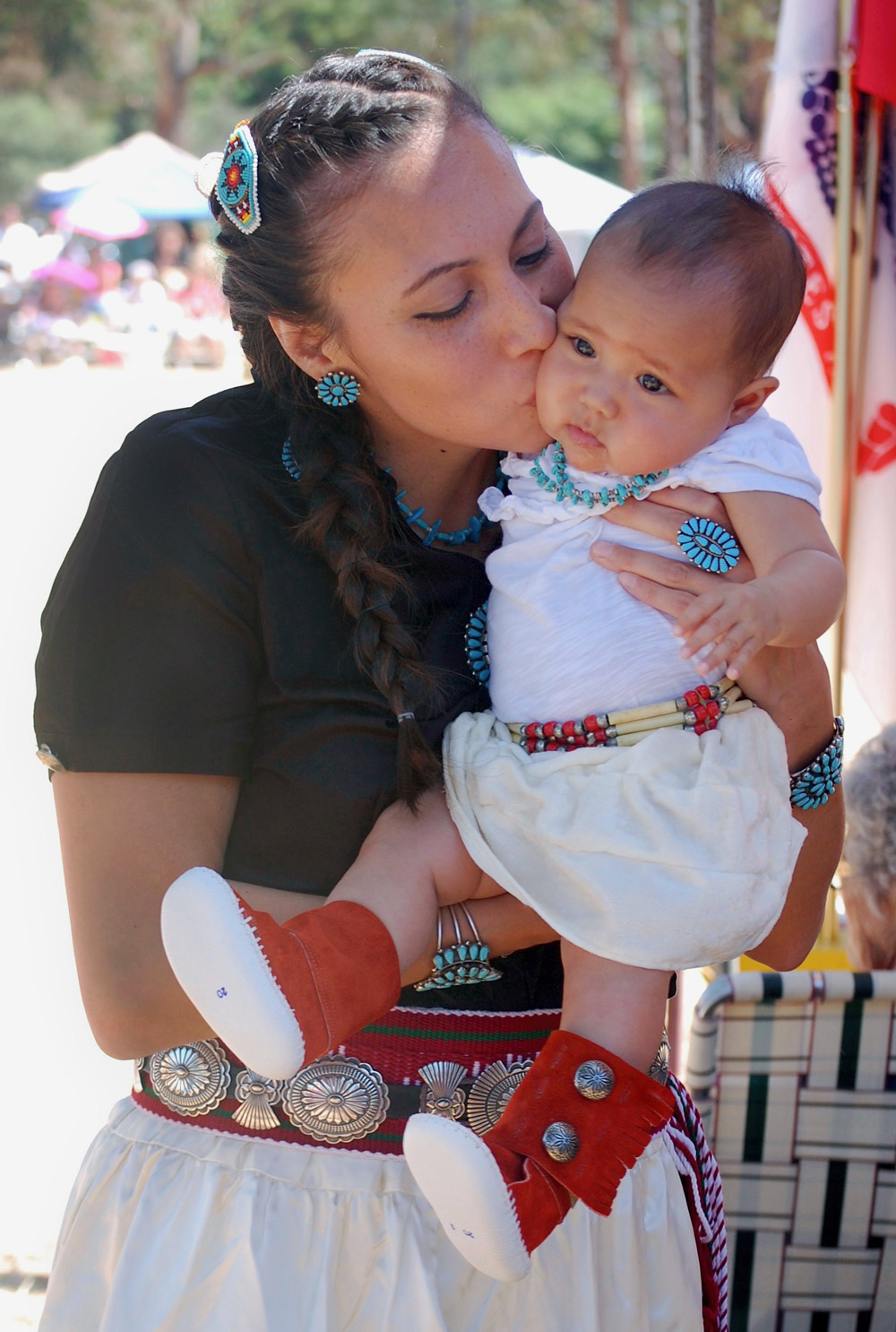 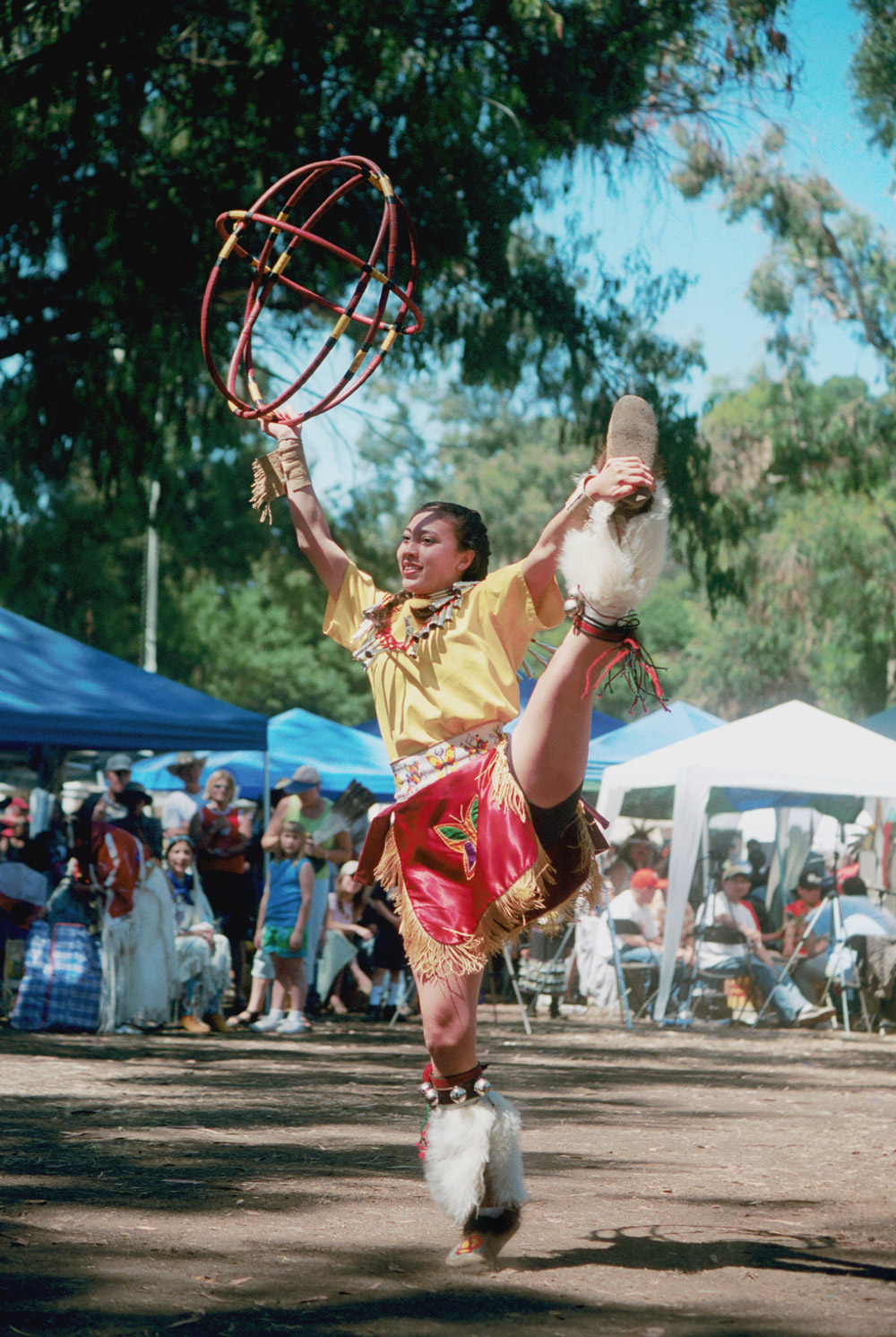 Powwow can be an intensely social event. For former co-chair Marcel Begay, ’96, it’s what pulls him back to campus. “It serves as an anchor,” he says. For many, it also has larger meaning as a proclamation of the vibrancy of Native life on a campus that long seemed bereft of such, despite its roots on the ancestral lands of the Muwekma Ohlone Tribe.

As recently as 1969, there were just four Native undergrads in the Stanford student body. (Today, there are around 300.) Ella Anagick, ’73, a Native Alaskan, remembers the Daily asking to interview her during her freshman year. “I declined,” she says, “because I just wanted to blend in back then.”

But Anagick and the other undergrads made their presence known in other ways. In November 1969, they signed a letter to Stanford president Kenneth Pitzer, asking the university to increase its enrollment of Native students and to offer more administrative and academic support for them, including through changes to student orientation. “Almost anything that is done in this regard will be an improvement over the present situation,” they wrote. 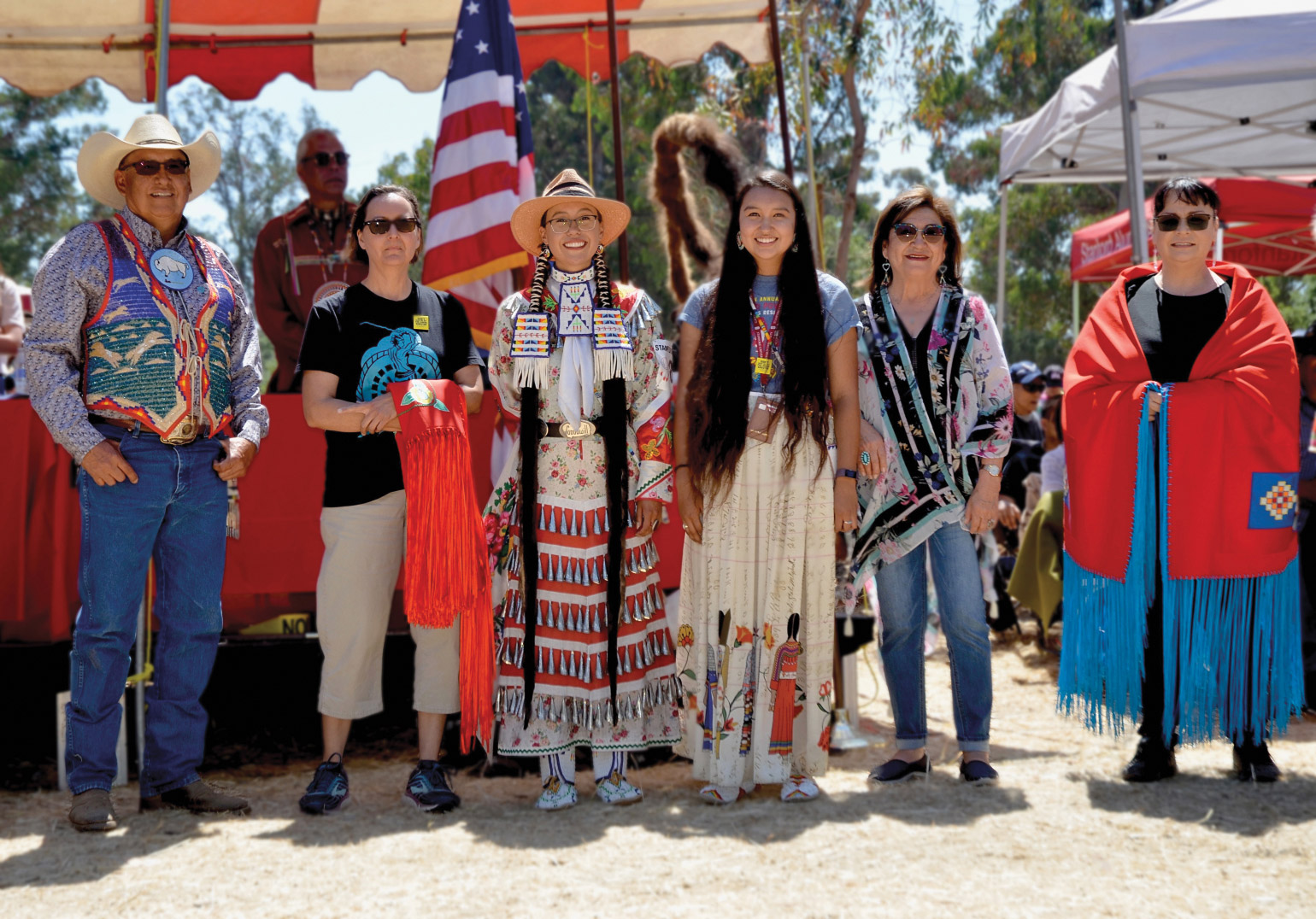 The letter helped spur a new chapter in the Native experience at Stanford. By 1970, Indigenous enrollment had increased sevenfold, and the newly founded Stanford American Indian Organization (SAIO) was pressing to remove the Indian mascot, which would happen in 1972. In 1974, Stanford’s Native American Cultural Center (NACC) opened, the enduring heart of Native life on campus.

Amid all this, the first Powwow was held on May 1, 1971. Ads said the event would highlight Native culture to the local community and raise money for student financial aid. They also had a political cast: The two-day dance would honor the Sioux men, women and children massacred by U.S. Cavalry at the Battle of Wounded Knee in 1890, an event one organizer likened to atrocities in Vietnam.

Dean Chavers, MA ’73, MA ’75, PhD ’76, a Lumbee Indian who had been part of the Native occupation of Alcatraz the year before, remembers another motivation as well: to attract Native students to Stanford and to make life better for the few already there. “It was most important for the freshmen,” he says. “They were pretty homesick.” 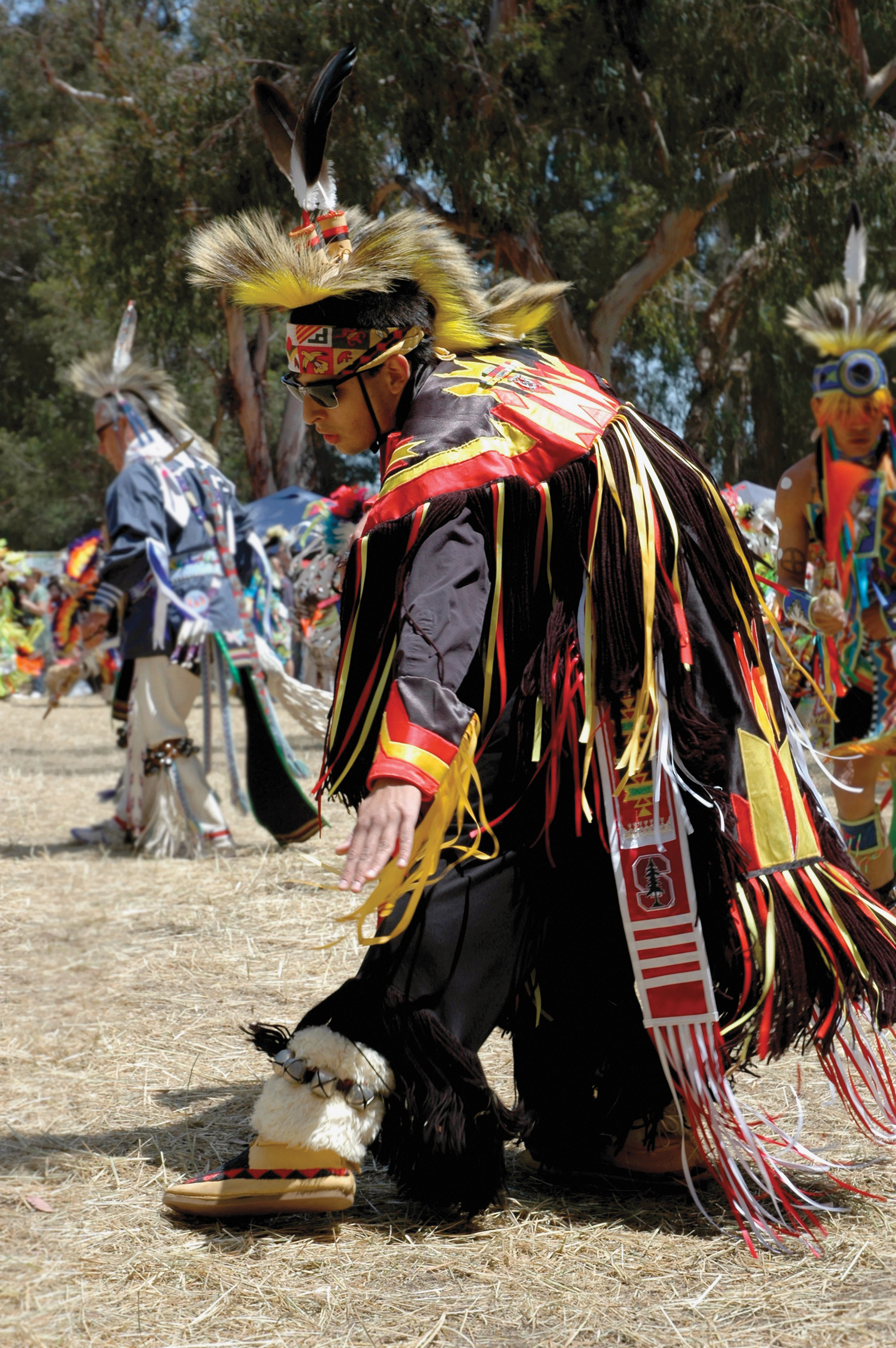 Fifty years later, Powwow is many things to many people. It’s a highlight for the Bay Area’s large Indigenous population, a magnet for tribal performers and vendors from across North America, a pan-Indian celebration of unity, a spiritual affirmation, the university’s largest annual multicultural event and an ideal way to celebrate Mother’s Day weekend.

And, as in Chavers’s day, it’s a comfort to those adjusting to life at Stanford. Approximately 100 of the 1,700 freshmen who matriculate each fall are Native,
Woodward says.

January Tobacco—a member of the Oglala Lakota Tribe who grew up on Pine Ridge Indian Reservation in South Dakota, one of the poorest regions in the nation—chose Stanford because of its support for Native students. She remembers getting calls from the NACC, and from students, reassuring her Stanford would be a good place for her. “No other university was doing that,” she says. 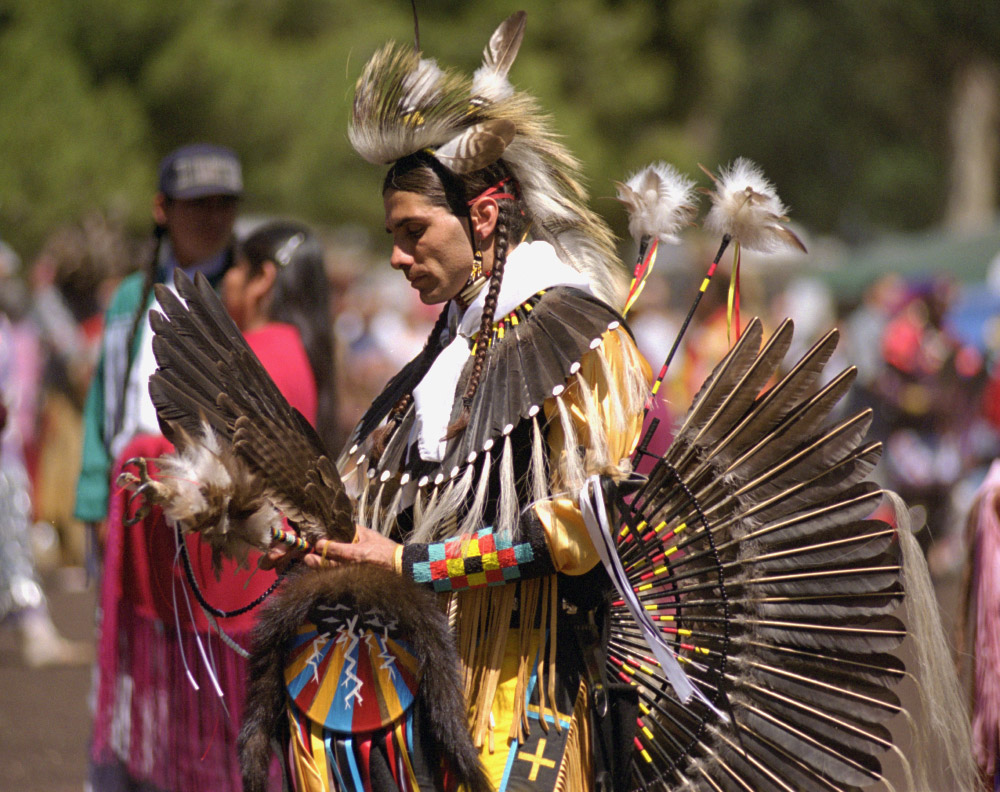 REFLECTING: A Northern Traditional dancer at the 1999 Powwow. “Dancing in one’s tribal regalia is often a prayerful process full of respect for the environment and Native lifeways,” Woodward notes. (Photo: Linda A. Cicero/Stanford News Service)

But as a self-described mama’s girl, Tobacco, ’17, who co-chaired Powwow her junior and senior years, still missed home—and the wealth she saw on and around campus jarred her. “I didn’t even realize that there was that much money in the world.” Her first Stanford Powwow surprised her with the way it transported her back to Pine Ridge. “To get a piece of frybread, to just hear all the Native voices and the Native laughter and to get dust in your hair—it was like having a piece of home on campus.”

There are other vital aspects of Stanford Native life: the NACC, the Muwekma-Tah-Ruk ethnic theme house, SAIO and the students themselves. But Powwow weekend, Tobacco says, brings them all together. 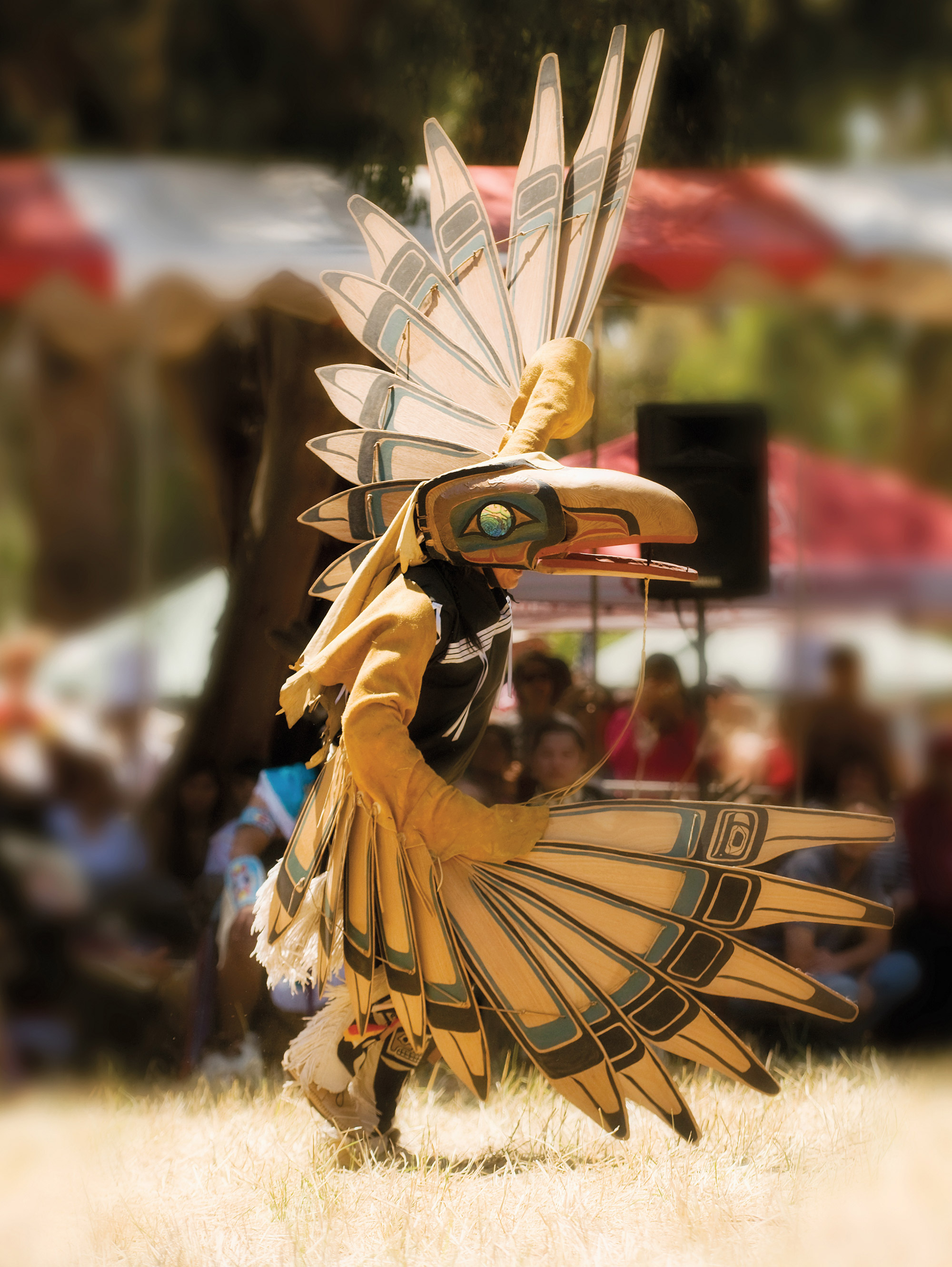 NIGHT AND DAY: Storyteller and teacher Gene Tagaban (Cherokee/Tlingit) in the Raven Dance in 2009. Tagaban travels the country telling the story of “how Raven freed the Stars, Moon and Sun into the nighttime sky and opened the Box of Daylight.” (Photo: Linda A. Cicero/Stanford News Service)

Even next year, the pandemic could continue to present challenges for Powwow. There will be only one undergrad class on campus that has put on the event live. Goodwill and other leaders are busy creating guides to bridge the knowledge gap.
‍
But Constance Owl, ’18, a member of the Eastern Band of Cherokee Indians and another former Powwow co-chair, doesn’t seem fazed. Powwow’s persistence for 50 years is testament to a deep community commitment to making things better for those who come after. “I don’t know if campus is going to be able to handle the turnout that we’re going to have for the next in-person Powwow,” she says. “It’s going to be huge.”

Sam Scottis a senior writer at Stanford. Email him at sscott3@stanford.edu.