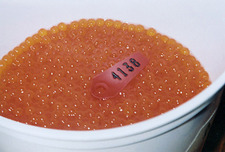 Q: Should I eat farmed or wild salmon? I know that farmed salmon may not be as healthy, and fish farms tend to be environmentally damaging. However, many wild runs of salmon are on the brink and I do not want to contribute to their demise.

For being the same animal, farmed salmon and wild salmon are drastically different. They present different levels of health risk and environmental impact, and they even taste different to avid salmon connoisseurs. But which should we eat?

Salmon, found in both the Northern Atlantic and Northern Pacific oceans, once spawned in rivers in North America, Asia and Europe. However, damming up rivers and cutting down nearby forests has distressed—and even eliminated—many salmon runs. Heavy fishing hasn't helped either. As the number of wild salmon decreased, more fish farms started popping up to meet the increasing consumer demand for salmon. Farmed fish, the Atlantic species of salmon, are raised in net cages in calm areas near the shore. The farms supply cheap salmon year round, while wild salmon supplies are much more seasonal.

You could argue that by eating farmed salmon, you're not eating wild fish and not hurting these already stressed populations. Unfortunately, this just isn't true. Salmon eat other fish, so the feed given to farmed salmon is largely composed of ground-up, wild fish. This depleted the availability of food for wild salmon. One study has shown that the world's fisheries as a whole have declined since the increase in farming. Additionally, the nets made to contain farmed salmon occasionally fail, and fish escape. Once in the wild, farmed salmon are less likely to survive early stages of life. However, they grow faster; if they survive youth, they outcompete native fish later in life. The farmed salmon can also spread disease to the wild. In the Atlantic, breeding between farmed and wild fish could lead to an overall decrease in the fitness of the fish.

Farmed salmon also contain more toxins than their wild counterparts since their feed contains higher toxin levels. The uneaten food, antibiotics, pesticides and feces of the fish pollute the water with both nutrients and chemicals.

That all being said, if everyone decides to eat wild salmon all the time, the natural fishery will collapse. So if salmon is a dish you don't have very often, treat yourself to the wild variety, preferably Alaskan salmon, where the runs are still healthy and well managed. However, if you eat salmon often, perhaps you should look into alternatives. The Monterey Bay Aquarium publishes the Seafood Watch, which lets you know which fish are caught (or farmed) in environmentally friendly ways and which fish contain significant levels of toxins. They recommend Arctic char as a good alternative to salmon. Whether you're moved by saving the environment or keeping yourself healthy, farmed salmon are not the best fish to eat.

Sam Fox plans to receive her master's in civil and environmental engineering in 2011.

Glass From the Past