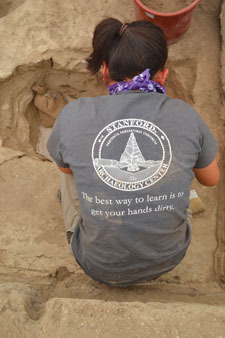 It's midafternoon on a Saturday. At the modest café that sits next to Çatalhöyük, beneath an orchard heavy with fruit, six Stanford students are bringing Professor Ian Hodder up to date on their week's work.

"I am watching all the exciting excavation happening next to me," she says. That morning, Herrero uncovered at least five infant skeletons, which specialists moved in quickly to document. Among the Stanford students participating in Hodder's summer field school, Herrero is an old hand. She dug dinosaurs in Barstow, Calif., while still in high school and has since been on digs in Peru and Jordan. "I was definitely the kid who was in the dirt all the time," she says. "I don't know why I'm into it—I really just like dead old things."

These weekly sessions give Hodder a chance to assess how things are going and give advice. "At every meeting, I feel like he's completely shot down every idea I've had," says PhD candidate Allison Mickel—before adding that somehow Hodder makes her feel as though she's also "had a brilliant breakthrough. I can't explain how that's possible."

The biggest challenge for Stanford archaeology students is not in the field but back on campus, where they must answer the same question over and over. "If you are an engineering major, people say, 'Oh! What kind?'" says Kierstyn Smith, '16, a prospective major. "If you say you are an archaeology major, people ask 'Why?'"

"There's definitely something to defend against with humanities majors," says Nikita Bogdanov, '16, who's considering majoring in physics and philosophy. On the way to a career fair, he overheard an upperclassman say, "Career fair at Stanford? So pretty much if you are not a computer science major you're worthless." Says Bogdanov, "A lot of people perceive that as true."

Mickel, MA '12, isn't so sure. She says heavyweights like Facebook and Google like to hire archaeology students because they study how people use technology and are at ease with sophisticated statistical analysis.

Kyle Lee-Crossett, '13, loved doing archaeology at Stanford. "It's a very small department. I got so much attention." Getting work was another matter. "It's hard to find positions—decent paying positions—with a BA," he says, before noting that "archaeology has a coolness factor. People think it's interesting."

"There's a little bit of the Indiana Jones effect," says Herrero. Students say things like, "Oh, you get to dig treasures and gold in magical places." Still, "It's a little more mundane," she says. "We don't get chased by Nazis on a regular basis."

Graduate student Adam Nazaroff takes archaeology's on-campus don't-get-no-respect vibe very personally. Voice wavering, he says, "I get really offended [by academics] who don't find value" in his research. Many say that what he does is science for science's sake. "That cuts deep, to be honest." He doesn't understand why "people don't challenge themselves to see the applicability of these projects."

Says Hodder, "NASA's very interested if there is life elsewhere in the universe. You could say, 'Well, why does that matter? That isn't going to change us in any real way, so why bother?' It's similar here. Maybe it's just existential or maybe it's scientific. People are really fascinated with these questions."

Lee-Crossett, now doing an internship with the Presidio Trust, says archaeology "tells the story that's not written in history, which is really interesting and important." He thinks of it as "applied humanities" that pulls from everywhere—physics, chemistry, anthropology. Still, he says, it can be hard "to argue for archaeology's absolute utility in the way you might for—I don't know—a business or economics or . . . "

"Finding the cure for cancer?" Herrero adds, as heads nod all around. "People spend their lives and give their lives [to archaeology]," Hodder says. "These aren't things they do for money or part-time. They do it because they really want to do it." What happened at Çatalhöyük "formed what we are, which is urban-dwelling, modern people. If that hadn't happened, we'd still be wandering around as hunters and gatherers."

Whether existential or scientific, Herrero's faith in her chosen field remains unshaken. "I'm contributing something to humanity by trying to understand people in the past," she says. "I won't be the next Mark Zuckerberg, but that's OK with me."