Where the Wild Things Are

They call it The Farm, but in many ways it's more like a sprawling botanical garden and wildlife sanctuary--home to 300 species of trees and 195 types of vertebrates. Walk through campus at dusk and you might see bats, floss silk trees and the occasional fox. Of course, Stanford's roots in the natural world go back to its very founding. Leland Stanford envisioned a 200-acre arboretum stretching from the Bay to the foothill ridgetops. He even named the first men's and women's dorms after native trees (Encina is Spanish for live oak; Roble means valley oak). The Arboretum today is smaller than Stanford imagined (the city of Palo Alto had to squeeze in there), but the whole University has become a natural treasure. So, for anyone who's ever wondered, for example, whether that really is a kumquat tree behind History Corner (yep), join us on a tour of some of Stanford's most remarkable flora and fauna.

Walk the Wild Side 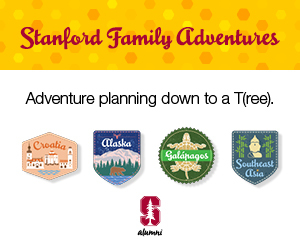 Walk the Wild Side

Pioneer In the Sky

A major biography examines the late writer's place in American literature and the West.

A new program aimed at alums with children combines the best of Travel/Study and Sierra Camp.