When to Replace Household Appliances: Nitty-gritty

Q: For a household appliance, at what energy differential does it make sense to replace immediately vs. at end of life for the unit?

Deciding whether to replace current appliances with new, more efficient ones depends on a lot of specifics, so making generalizations to cover all appliances in your home would require many, many assumptions. A short explanation of how energy use is calculated, however, gives us a springboard for making some solid decisions.

The unit most often used to compare the energy use of different appliances is the kilowatt-hour per year (kWh/year), a measure of the average amount of energy consumption. Even with frequent breakfast smoothies—two minutes of running time, three times a week, every week of the year—the annual energy use for my .650 kW household blender comes to a whopping 3 kWh/year. Therefore, a new blender may double the efficiency (or halve the energy consumption) but save only a kilowatt-hour or two over the year. A tiny amount of the 10,000 kWh used by a typical American household in a year.

On the other hand, if you could double the efficiency of appliances that use a lot of energy, then you’d really notice a difference in your electricity bill. Over 60 percent of home energy use goes to power the most energy-guzzling appliances in your home: refrigerators, laundry appliances, water heaters, air conditioners and heating furnaces. (Include that new flat-screen plasma TV, and you may cover an extra 3 percent.) Here is a breakdown of the energy consumption for an average household, provided by the U.S. Department of Energy (DOE) 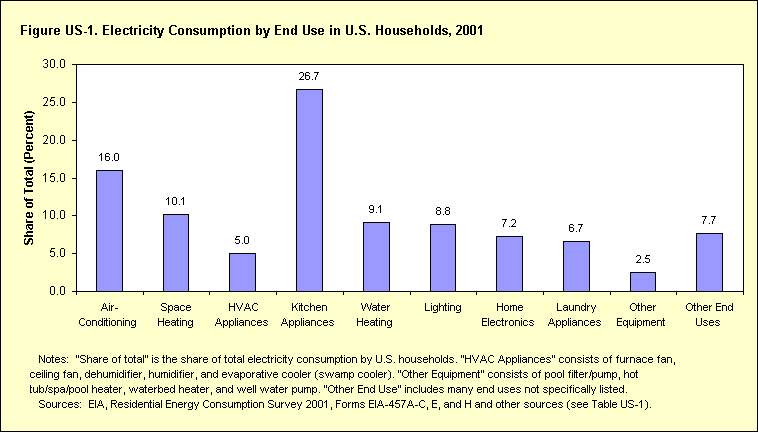 Unfortunately, estimating the kWh/year for large appliances is notoriously difficult. The energy consumption depends a lot on individual users, and slight differences in the assumptions can lead to very different estimates. For example, an air conditioner’s compressor may be on for three hours a day or 24 hours straight, depending on the local weather and the preferences of the person who controls the thermostat. The difference in estimated energy use between these two scenarios is dramatic, from approximately 1,500 kWh/year to 13,000.

Some appliance types can increase greatly in efficiency with new designs, while others are much more difficult to improve. For example, the newest refrigerators can use 40 percent less energy than conventional models sold as recently as 2001, but current furnaces, for example, are only 15 percent more efficient than even much older models.

(Understandably, the federal government sets stricter performance standards for those appliances most able to achieve them. For example, conservation standards for residential electric ranges have been deemed not to be “technologically feasible or economically justified” by the DOE, so this appliance is not worth fussing over for your home.)

Here’s how the very general 5-10-15 rule (five years old, do not replace; 10 years old, run the numbers; 15 years old, probably time to replace) applies to the five major energy-consuming appliances in most homes:

Refrigerators consume half of all kitchen electricity, and typically account for 10 percent to 20 percent of a household’s total energy bill. This, coupled with the fact that the operating efficiency has been improved significantly, makes aging refrigerators obvious first candidates for replacement. Compared to a standard pre-2001 refrigerator, a new $800 refrigerator can pay for itself in eight years through electricity savings. Refrigerators are such electricity guzzlers that many utility companies will actually subsidize the upgrade. For example, Pacific Gas & Electric in California offers its customers $35 to come and pick up any refrigerator older than 10 years. A DOE chart shows the breakdown of electricity consumption in an average American kitchen.

When it comes to furnaces, “old” appliances take on a new meaning—furnaces can last for 70 years or more. As with cooling, home heating performance is better with a well-insulated home and sealed ducts. Getting the correct-size unit for your house and installing it properly are also crucial for both heating and cooling—as important as the quality of the appliance. New furnaces can be 15 percent more efficient than older models and save you more than $75 a year—much more if you live in the coldest regions of the country.

Behind heating and cooling, heating water is typically the second-largest energy expenditure. Water heaters usually last for about 15 years, and replacing an older model with a more efficient modern model can save $30 per year in bills. Tankless water heaters may be the most efficient option currently available, but two new high-efficiency options should be on the market within a year or two. Gas-condensing water heaters transfer more heat to the water than standard units by using the combustion gases more efficiently; these can reduce water-heating bills by $180 per year. Then, there are ultra-modern heat pump water heaters that can save $300 per year. They conserve energy by moving heat from one place (the air) to another (the water) with a boost rather than generating the heat through combustion in the first place.

New clothes washers can use a third of the energy and half of the water used by older machines.  By far the majority of energy consumption for clothes washers comes from heating the water though, rather than actually running the machine. The most efficient washers not only use less electricity to operate, they also use less water so your water heater doesn’t have to work as hard. Plus, elevated spin speeds on new efficient washers are designed to remove more water and therefore reduce the amount of time needed in the clothes dryer. By using an efficient clothes washer, it’s like you are increasing the efficiency of three appliances at once!

What about the energy costs of making new appliances and disposing of the old ones? Estimating this total “life cycle” energy requirement for appliances is quite difficult, and it’s nearly impossible to find reliable ballpark estimates. Recycling appliances—one of the original three R’s in sustainability, along with Reduce and Reuse—will certainly help lower the negative environmental impacts of general consumption, though programs for recycling refrigerators tend to be more common than for the other large appliances.

Still, monitoring and improving the energy efficiency of household appliances is a lot more manageable than you may have imagined. Assuming that you are not furnishing a new home with new appliances, but are already using the ones in your home, there are really only a handful of major appliances that are worthy of your attention. When it comes to refrigerators, water heaters, central air conditioners, furnaces, and clothes washers, think 5-10-15.

For more information, the Energy Star website is a great place to start.

Other information on general energy statistics and energy efficiency is also available.

Rachel Adams is a PhD candidate in biology.

All the Identities He Can Paint

Ala Ebtekar synthesizes the roles of graffiti-loving Persian miniaturist.