When Pros Return to Hit the Books 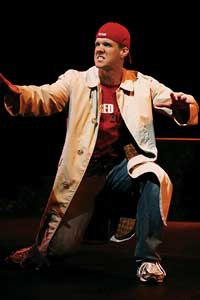 Pitcher Jeff Austin missed his original senior year, having been drafted by the Kansas City Royals as a junior in 1998. These days, he’s back on campus, taking advantage of opportunities he never had time for when he was on the mound for the Cardinal. Last fall, for example, he auditioned for Big Game Gaieties, and—much to his surprise—landed the male lead.

Tennis player Marissa Irvin, who has notched six appearances at Wimbledon and at the U.S. Open, has also enjoyed her share of first-evers since returning to the Farm. She’s gone bowling on the spur of the moment, spent weekends with her boyfriend and taken an actual spring break. “Just like a normal person.”

Austin and Irvin are among a handful of student-athletes who return to the Farm each year, after professional sports careers, to complete their degrees. Although they go mostly unnoticed—“I don’t wear clothes with ‘Wimbledon’ written on them, and don’t carry a racquet,” Irvin says—their experience of being back in the classroom can be profound. “It’s nice to see these kids who can be so creative,” says 29-year-old Chad Hutchinson, a former pitcher with the St. Louis Cardinals organization and former quarterback for the Dallas Cowboys and Chicago Bears who plans to finish his course work in August. “It brings back some of the innocence that I remember from college.” Pause. “The real world can be harsh.”

Hutchinson enrolled as a freshman in 1995. Highly touted in two marquee sports, he was a two-year starting quarterback and three-year starting pitcher for the Cardinal. Like many of his baseball teammates who turned pro, Hutchinson was drafted at the end of his junior year. After four years with the Cardinals’ organization, and two years each with the Cowboys and Bears, he was released last August. “The life of a pro is very short,” he says. “You don’t ‘get it’ until you’re done, sitting back, thinking, ‘That went by pretty fast.’”

This spring, Hutchinson applied to be reinstated at Stanford, and he plans to earn his political science degree in August. “For me, the principle is, what you start, you finish,” he says. “When I was in school before, I was a two-sport athlete, growing up, being away from home,” he adds. “Now my priorities have changed, and I’m enjoying classes because I love to read.”

Kyle Peterson, who was drafted by the Milwaukee Brewers as a junior in 1997, feels the same way. “When I left, I promised my parents I’d come back for my degree,” says the ESPN color commentator. He took distance-learning classes on the road, and returned to the Farm in 2002 to finish his final courses, including Introduction to the Humanities. “I was in a freshman class, and I was older than the TA,” he recalls. “It was an interesting class to take as a 26-year-old.”

As a professional tennis player, “I wasn’t going to an office or reporting to a boss,” says Irvin, whose world ranking peaked at No. 51. “But I was living in a version of the real world, managing my own income and expenses, and I think I definitely bring a different perspective to a lot of my classes than someone who’s gone from high school to college.”

Although returning student-athletes often have to make considerable adjustments, they have staunch allies in Susan Burk, assistant athletic director for student services, and Duane Voigt, academic director for student-athletes, who field phone calls and calm a lot of fears. Voigt works with a campuswide returning students’ group that hosts monthly lunches designed to ease the transition. He was the first person Irvin called when she felt the time had come to return to school. “I always intended to graduate, and I decided at 25 that getting a degree was extremely important to me,” she says. “I feel I have more to offer than just running around a court.”

Austin, who graduated in June, says the first 28 years of his life were focused on becoming a major league player—conditioning his body and trying to strike players out. But after seven years with the Royals and the Cincinnati Reds organizations, plus several shoulder surgeries, he was ready for the life of a student. “I threw a lot of effort into my academics, and got straight A’s for the first time in my career.” Like many returning student-athletes, however, Austin worried about fitting in. “I tried to shave every day because I didn’t want to be the creepy old guy in class.”

In the contract he’d signed with the Royals, Austin had negotiated for the degree completion funds that are offered by Major League Baseball. “The beautiful thing about signing in your junior year is that the clubs are obligated to pay for the rest of your tuition, room, board, books and fees,” he says. (The National Football League also offers degree completion funds, says Vaughn Bryant, ’94, who played for the Detroit Lions, New York Jets and Philadelphia Eagles, and now works in the NFL’s player development department.)

Above all, Austin says, “I wanted to have my senior year experience, even though I am 29.” So, when Gaieties auditions rolled around last fall, Austin jumped at the opportunity. “I walked up to the audition table, and the guy asked me, ‘Are you a graduate student?’ and I said, ‘No, not really.’” Austin made the first callback, then the second. And soon it was down to him and three other guys. “I was kind of over my skis, but the voice part was very high—first tenor—and I could hit the notes the other guys couldn’t.”

Austin was rolled out the next day at 5:30 a.m. and treated to a champagne salute in the MemAud fountain. Today, with a degree in his pocket, he says he’s ready to “stop the gypsy act,” moving all around the country with his wife, Courtney, and two dogs. “I’m ready to throw my hat in the ring and try to get a real job.”

Among the tykes in Barbara Shipley s little daytime drama.