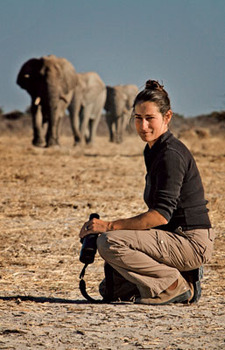 The first time Osh stood on the metal plate designed to test how he'd respond to ground vibrations, the 15-year-old African elephant was so curious he used his trunk to rip the heavy slab right out of the ground. Researcher Caitlin O'Connell-Rodwell, equipped with backups for most of her electronic devices, hadn't anticipated this. But improvising and solving problems on the spot are part of her daily repertoire, whether she is collaborating with Oakland zookeepers to study Osh and Donna, another resident African elephant, or camped out in Etosha National Park in Namibia, where for the past 17 years she has researched the remarkable communication techniques of wild elephants.

O'Connell-Rodwell's book The Elephant's Secret Sense: The Hidden Life of the Wild Herds of Africa was published in 2007. Her findings have been enlightening and may lead to advances ranging from new listening devices for the hearing impaired to a deeper understanding of elephant intelligence and the impact of climate fluctuations on elephant behavior and conservation.

O'Connell-Rodwell is an ecologist and assistant professor consulting in otolaryngology/head and neck surgery at the Medical School. She splits her time between Stanford, her home in San Diego, and Africa, where she has developed a longstanding relationship with park officials who have "grandfathered in" her project studying elephants at a remote water hole normally closed to the public.

"There are a lot of interesting new things coming out," says O'Connell-Rodwell, whose forthcoming book is The Boys Club: An Elephantine Take on Male Society (Harvard U. Press). "The new research shows that male elephants have long-term associations that are highly affiliative," O'Connell-Rodwell says. "What is known about elephant bulls is that they get pushed out of family groups when they reach sexual maturity; this action is thought to prevent inbreeding. These males are then thought to form loose bachelor groups at times and often end up being solitary. But our long-term study shows that many males form discrete bonded groups. This finding is unexpected, different than what anyone thought about male elephants."

O'Connell-Rodwell's research in Etosha also led to the discovery that elephants communicate through a previously unknown system of sensing and responding to vibrations they receive through the bottoms of their feet. Not only can they anticipate other elephants approaching or even traveling several miles away, but they also react differently to vibrations from elephants familiar to them than to those from strangers. Data suggest that her subjects could pick up on weather changes such as thunder and downpours that would help them find water or green plants to eat, as well as alert them to nearby predators or potential mates.

The discovery of this ground communication system came about when O'Connell-Rodwell observed how elephants would intermittently stop and position themselves all pointing in one direction, ears flattened to their heads, some with their trunks touching the ground. Through experiments in which she played acoustic and seismic signals for the elephants at the water hole, she learned they were receiving information through the ground that started with sensation in the toe tips and traveled through the leg up to the middle ear. Another pathway went from the feet through the somatosensory system to the brain.

"I think Caitlin's work has really opened up realms of unknown areas in elephant society and communication that change the way we perceive the species and will change how we are going to manage the species," says George Wittemyer, a leading elephant researcher at UC-Berkeley.

"The mystery for decades has been how elephants move the group and orient themselves and why they freeze in odd ways. People have speculated on what drives this, but Caitlin has answered the questions and has opened our eyes to new aspects of elephant ecology in areas never before understood."

O'Connell-Rodwell's fascination with elephants and her research grew out of a chance job offer during a trip to Africa with her husband, fellow researcher Tim Rodwell, MD '03. The Namibian government hired her to work with farmers struggling to deter wild elephants that were destroying their crops. She came up with some short-term and long-term plans involving sound and electrical fencing deterrents, and slowly built trust with the farmers, helping to generate a more positive attitude toward elephants.

Today, O'Connell-Rodwell spends summers living in a three-story tower with ladders connecting each level. Constructed right beside Mushara Water Hole within Etosha National Park, the camp boasts a bush shower and toilet, and a StairMaster that enables researchers to exercise without going outside the enclosed camp, where it often isn't safe.

The team includes a core of scientists and a couple of Stanford students paired with local Namibian students. Through the nonprofit organization Utopia Scientific—formed by O'Connell-Rodwell and her husband—teachers, photographers, writers and others can volunteer for two weeks as members of the team. Volunteer fees help support the organization's elephant studies and mission of promoting public awareness about the importance of research and conservation.

A typical day at the water hole starts and ends late to follow the elephants' patterns. The males usually arrive before noon. At dusk, females begin gathering on the horizon, but they normally won't come with their calves until sunset. Researchers identify, count and observe the groups, conducting sound and vibration experiments and gathering fecal samples to help determine family relatedness, general stress levels and parasite loads. Then they compare and analyze notes on who's who and which groups are associating with each other on any particular visit.

"Lately our experiments have been mostly observing the bull interactions," says O'Connell-Rodwell. "They are doing really interesting things. They are incredibly bonded and display fascinating ritualistic behaviors."

For example, younger males demonstrate their submissiveness to the alpha males by lining up and one by one placing the tip of their trunk in the mouth of the dominant male. It's "an invitation to interact, as if to say, 'I see you, I am submissive and I won't cause any trouble,'" says O'Connell-Rodwell. "It has been really interesting to have this window into a secret society."

At home in California, O'Connell-Rodwell has been working with trainers at the Oakland Zoo to teach two African elephants, Donna and Osh, to respond to sounds and vibrations so that she can determine the level at which elephants detect vibrations.

On a recent sunny day at the bottom of the Oakland Zoo elephant pen, O'Connell-Rodwell set up her little folding table and her elaborate homemade listening equipment, which is wired to the plate on which Donna or Osh will stand. Under the plate she has installed a vibrating machine purchased from a home theater store. Trainer Colleen Kinzley lures Donna down the hill to the research spot where the elephant stands impatiently munching on horse treats and awaiting her first round of prompts. Both elephants are being trained to give their responses by touching a square post to their right that signals "yes" or a triangular one on the left that means "no." When they give the correct answer, they are rewarded with a treat. Once they can reliably signal whether O'Connell-Rodwell has sent them a vibration, they can be asked other questions.

"It's really nice for the zoo to participate in the research and it allows us to learn more about the elephants," says Kinzley, who has traveled to Namibia with O'Connell-Rodwell five times to help with fieldwork.

Once Donna and Osh are trained to "answer questions," O'Connell-Rodwell foresees new avenues for extending her work. "Researchers suggest that elephants have cognitive ability and since elephants have a very large temporal lobe relative to other mammals, where communication and long-term memory are processed, they are a great candidate to look for the capacity for cognition," she says.

"If the elephant can look at a real object and can recognize that object in a picture, that is a first step. Then you go into more levels—does the pumpkin still look the same in 3D? You put a real pumpkin in the pen after showing the photo, and see if they go to the site illustrated in the photo. That is how you get to that next level of the elephant having referential thought about an object. Have you created a picture of it in your mind? We are at the tip of the iceberg."

MELINDA SACKS, '74, is director of media initiatives at Stanford.

No More Business as Usual