We of Many Faiths

Most of the world s major religions are now practiced here on campus. 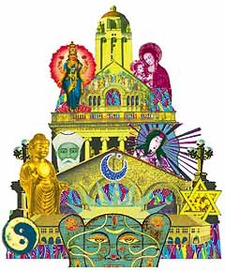 The Stanford campus presents a fascinating conundrum: a rigorous intellectual atmosphere with a grand chapel at its physical core. Visitors can marvel at the American Renaissance masterpiece that is Memorial Church and then walk the hundred or so yards to see the new science and engineering quad. Viewing both, they might be tempted to suppose that the landscape resonates with the tension between reason and faith, between intellectual life and religious life.

As Stanford’s chaplain, I have been at the crossroads of these two strands of University life and have come to know a large number of people and interact with many of them in deeply personal ways. I am often asked to classify this group: are they disinterested, actively disengaged or hostile to religion in some fairly fervent way? I know some in each of these categories but more of them seem to subscribe to the statement, “I am a spiritual person” than to “I am a convinced and committed atheist.”

Then there is the one-third of today’s undergraduates who are associated with one of the more than 30 religious groups on campus. They intend to study here without hiding their faiths and without leaving their beliefs at the gates. For them, intellectual rigor and religious commitment are not incompatible on this campus.

But what is religious commitment? During the last decade I have witnessed the growth of many forms of observance. Stanford today is “geo-religious” -- a place where most of the major religions are practiced. There are significant numbers of Jews, Muslims, Hindus, Buddhists and Baha’is living alongside students who are Catholic and Protestant Christians. Every student who comes here with a commitment to the traditions of his or her own faith is guaranteed a place for observances, meetings and modes of prayer. The path, though, is not always smooth.

I was reminded of this just recently when a young friend e-mailed me from Israel, where she runs a women’s organization serving both Jews and Arabs. Her message reminded me of the day a decade ago when she and others were stung by anti-Semitic remarks delivered by a guest speaker in a sermon at Memorial Church. We organized seminars and discussions to deal with their deep discomfort. My friend hung in through the rigorous give-and-take of those meetings, both demanding honesty and giving it. This ability to be sensitive to the beliefs of others and willingness to enter into dialogue is central to the success of our new geo-religious environment.

The growth in the number of religions practiced in this new environment has been reflected in the title of my office, which we changed two years ago from dean for Memorial Church to dean for religious life. It was a change that was long overdue. Today, the University’s chaplaincy staff consists of a rabbi, an Islamic imam who joined us last year, and three Christian clergy. As a group, we are constantly made aware that Memorial Church, with its Christian iconography, is not well suited to the worship and assembly needs of many of these groups, and the chaplaincy staff is therefore actively involved in finding other places of worship.

Is this all part of a contrived “multicultural agenda,” something to be dismissed as part of a trend toward “politically correct” behavior? I think not. We can greet change either with varieties of denial or with forms of welcome. Stanford is not the place I came to in 1987. It is different: differently rich in the faces and names; differently rich in the conversations available, many of which will take us places we’ve not gone before. I’ve always taken it for granted that such rich and challenging conversation was education’s raison d’être and also its chief enjoyment.

The challenge I see facing us is how to keep these conversations going and remind ourselves that, here on campus at least, faith is inclusive, not exclusive.

Robert Gregg retires as dean for religious life in January 1999.

Many Stanford winemakers have followed a path as scenic and winding as a Napa country road.