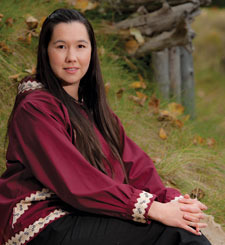 Up here, where nights blush with the Northern Lights, icy rivers surge with salmon and polar bears leave their tracks in the snow, there's a lot to appreciate—and preserve. For Annette Evans Smith, that includes Alaska's diverse native cultures, and she has made sustaining them her life's work.

Native Alaskan herself (Yup'ik, Sugpiaq and Koyukon Athabascan), Smith, '99, is president and CEO of the Alaska Native Heritage Center. Since 1989, the nonprofit, based in Anchorage, has celebrated Alaskan native life in its storytelling and artist demonstrations, dance performances and films. Its exhibits include six life-sized replicas of ancient dwellings.

However, federal funding cuts threaten the center's future. "It's a very difficult time," says Smith, but meeting that challenge makes it "also the most exciting." More funding sources, to support dynamic programming (including two-week summer and winter festivals), statewide networking and community engagement "will give visitors reasons to return again and again—and assure our survival."

Smith directs the organization's strategic planning, working with the DeVos Institute of Arts Management, donors and other partners. Diane Kaplan, president of the Rasmuson Foundation, one of the largest private foundations in the Pacific Northwest, and co-founder of the ANHC, is confident that Smith can keep the center thriving. "Annette has the vision, passion and common sense business acumen that is needed at this time in the Heritage Center's development. She is deeply committed, and it shows in everything she does."

Smith also is helping preserve the state's 20 indigenous languages, 19 of which have been classified as critically endangered by UNESCO. The number of speakers of Alaska's native-languages is dwindling—Yup'ik speakers declined 41.6 percent from 1982 to 2007.

Smith didn't grow up learning Yup'ik or Koyukon, but was surrounded by their rhythmic sounds. Born in Fairbanks, she spent her childhood in Anchorage and in the rural southwestern Alaska villages of Dillingham and South Naknek, both still so remote that the only way in is by air. Unlike many Alaskan native youth today, she was raised with her grandparents' traditions. "I was heavily influenced by their commercial and subsistence fishing where your life is ruled by the tides, not time. I began fishing when I was old enough to carry a fish," she says.

Now, she, her husband and their two sons are learning Yup'ik. "Language is as fundamental to culture as DNA is to the body," Smith says. "When you begin losing language, you begin losing traditional knowledge and ways of understanding the world." 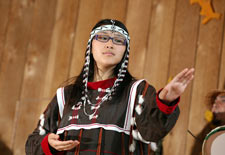 It doesn't help that "our own people have been indoctrinated to believe our indigenous languages and cultures are backward," Smith notes. She points to studies that show indigenous children who have strong cultural and traditional backgrounds are more successful academically. The reverse of this also is true, and the loss of heritage is a risk factor. Suicide rates among Alaskan native youth are more than double the national average. "The success of a people moving forward is directly tied to their language," Smith says.

There have been some victories lately. Smith was among those who testified at hearings about a state bill to establish the Alaska Native Language Council, which will advise the legislature and governor on native-language policy recommendations. The bill passed last April. And the ANHC recently received $286,000 from the U.S. Department of Health & Human Services.

Smith will use the funds to assess existing programs, such as Inupiaq classes in Barrow and Koyukon-Athabascan classes in Fairbanks that are broadcast to that region's villages. Next, she'll connect programs to each other and to Anchorage, which will serve as a resource conduit.

"When the youngest speaker of a language is 65 or older, you don't have much time," Smith says. "For Alaska's native languages, there's no other place to learn them but here. It's up to us to keep them going."

Claire Sykes is a freelance writer in Portland, Ore.

Hailed for its acoustics, Bing Concert Hall is also seen as an instrument for changing Stanford's profile in the arts.

For Abstainers, a Place of Their Own

University accommodates students who prefer living in a no-alcohol environment.

The Dirt on Organics: Essential Answer