Woodblock and letterpress artist Tom Killion, MA ’80, PhD ’85, received the 2017 Marin Cultural Treasure Award. Killion, who grew up in Marin County, has been interested in Japanese-style woodblock artists, especially Katsushika Hokusai, since his youth. His first book, published in 1975 soon after he graduated from college, featured Marin’s Mount Tamalpais. “It’s such a beautiful place,” notes Killion, who received the award in part for his support of Marin Center cultural programs. He is a longtime art judge and exhibitor at the Marin County Fair. 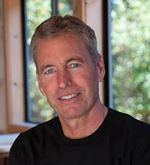 Recently, Killion has been working on treescapes. Most of his prints focus on California landscapes, but after earning a PhD in African history, he published Walls, a collection of sketches from his travels in Europe and Africa. A full-time artist since 2002, he worked previously at a camp for Ethiopian and Eritrean refugees in Sudan and as a history educator.

An Advocate for Women Leaders