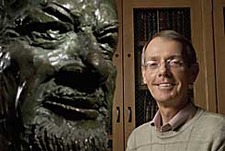 Under dimmed lights in Green Library’s cool, quiet Charles and Frances Field Room, curator William McPheron wheels in a cart laden with papers, photographs and notebooks. He picks out an album, circa 1905, and points to a black-and- white photo. It’s John Steinbeck, in short pants and a Buster Brown haircut.

California’s most famous storyteller begins to come to life as McPheron opens a hardbound ledger notebook containing a draft of the 1933 novel, To a God Unknown. The pages are covered with cursive handwriting small enough to make one squint. There are few, if any, cross-outs in the cramped lines of purple ink.

McPheron, curator of British and American literature, pulls out a small postcard sent to Steinbeck’s agent in New York in an era before ZIP codes and return addresses. In that tight, precise hand, Steinbeck credits his first wife, Carol Henning, with the inspiration for a title “that I think is swell. THE GRAPES OF WRATH from the Battle Hymn of the Republic. Try it over and see how you like it.”

Stanford houses numerous special collections in a temperature-controlled, high-security vault, including papers of Ernest Hemingway, Allen Ginsberg, Tillie Olson, Robert Creeley, William Saroyan, Robert Pinsky, MA ’65, PhD ’67, and Denise Levertov. But many scholars hold the John Steinbeck collections in especially high regard. That may be because Steinbeck attended the University off and on between 1919 and 1925, or because the archive continues to grow. McPheron says Stanford hopes to receive the author’s Nobel Prize medallion and the last trove of personal correspondence remaining in private hands—letters from Elaine Steinbeck, the author’s third wife.

“Elaine told me that John always wanted the Nobel Prize to go to Stanford,” says Susan Shillinglaw, director of the Center for Steinbeck Studies at San Jose State University, who developed a friendship with Steinbeck’s widow over the last decade. “Stanford was his school and he felt a great sense of loyalty.” After Elaine died in April 2003, a letter of intent was signed between Steinbeck’s stepdaughter, Waverly Scott Kaffaga, and President John Hennessy.

Building a significant archive on Steinbeck takes some doing: his papers are scattered across 10 institutions from coast to coast. Besides Stanford and San Jose State, they include UC-Berkeley, Ball State University in Indiana, Columbia University, the University of Texas, the National Steinbeck Center in Salinas, Calif., the Pierpont Morgan Library in New York, Princeton University and the University of Virginia. “Steinbeck, and later Elaine, gave things to many places,” McPheron says. “They never seemed to be concerned about having everything together. It’s not like the collected papers of Gertrude Stein, which are all at Yale, for example.”

But given Steinbeck’s prolific output—22 novels, 12 nonfiction books, three film scripts and truckloads of newspaper articles and magazine essays—there is more than enough material for several universities to have built strong collections. McPheron points out that Jackson Benson, ’52, author of the definitive 1984 biography John Steinbeck, Writer, cited four institutions as crucial to his research: Stanford; the University of Texas, Austin, which has source materials and early drafts of The Grapes of Wrath and East of Eden; Pierpont Morgan, which houses the diaries and the handwritten draft of Travels with Charlie; and San Jose State, which has The Long Valley, Of Mice and Men and short stories from the 1930s.

Among Green Library’s holdings are numerous notebooks and drafts associated with Steinbeck’s earliest works, including his first novel, Cup of Gold, The Pastures of Heaven, To a God Unknown and Cannery Row. The collections include his letters to Elaine and correspondence with key people with whom he discussed and developed his work, including his agent, Elizabeth Otis, and Carlton Sheffield, ’23, MA ’30, a Stanford classmate and lifelong friend.

During the past two decades, the collection has tripled. Wells Fargo made a significant gift in 1999 to mark the California sesquicentennial. The company purchased a collection of letters and photographs from the estate of Esther Steinbeck Rodgers, the author’s older sister. McPheron declines to reveal the price tag of this gift but offers a point of comparison. “It costs between $5,000 and $10,000 for a single page of Hemingway’s correspondence,” he says. “Steinbeck is not quite as expensive, but he is in a similar league. One must think in terms of thousands of dollars per page, even for short notes.”

The University has purchased other Steinbeck material. The author’s 10-year correspondence with U.S. diplomat Leslie Brady, beginning in 1954, sheds light on Steinbeck’s prolific output as a journalist. At a time when tension was high between Charles de Gaulle and President Eisenhower, Steinbeck was asked to write essays for the Paris-based newspaper Le Figaro. Anxious not to inflame Franco-American relations, he submitted his essays in advance to Brady, the cultural attaché at the U.S. Embassy. The two continued to correspond into the 1960s, when Steinbeck was tapped by President Kennedy to lead a cultural delegation to Moscow.

“People do find amazing things in their closets and give us a call,” McPheron adds. That is how Stanford recently acquired material from one of Steinbeck’s lesser-known film projects. Two years ago, Alisa Kline, daughter of the documentary film director Herbert Kline, found a notebook covered in Steinbeck’s handwriting. It was the script for a 1941 documentary film called The Forgotten Village.

“Steinbeck encountered a lot of hostility from conservatives once he published The Grapes of Wrath in 1939,” McPheron says, explaining that the author sought ways to retreat from the fray. “While he was waiting for the Sea of Cortez project with [marine biologist] Ed Ricketts to come together, he was approached by Kline to make a movie about revolution in rural Mexico.” As McPheron points out, the country held an abiding fascination for Steinbeck, who agreed to the project on condition that the story line switch from revolution to focus on “modern sanitation versus folk medicine.” Steinbeck wrote the script and flew to Mexico to scout locations and assist with production.

The archive includes the detailed 36-page screenplay and correspondence between Kline and Steinbeck about censorship. (The New York Board of Regents initially refused to issue a screening license, calling the film obscene for its shots of a woman giving birth. Eleanor Roosevelt reportedly intervened and the film premiered in November 1941.) There are hundreds of production stills and photos taken by the director’s wife, Rosa Kline.

Material like this makes Stanford’s collection invaluable—the “pre-eminent place in America for research on John Steinbeck,” in the estimation of Michael Keller, head librarian and director of academic information resources. Yet McPheron reckons there may have been only 30 to 50 serious uses of the collection by scholars in the 20 years he has been at Stanford.

He would like to see that change. “We are, in a sense, another monument to Steinbeck’s heritage and influence in California,” the curator says. “There’s great potential to exploit the collection, in the best sense of that word. No one has gone through and written the book based on the material we now have.”

BARBARA TANNENBAUM is a freelance writer based in San Rafael, Calif.

Joe Kay was a math whiz, a two-sport star and an award-winning sax player. One moment after the buzzer, all that changed.

In His Nature to Teach

What You Don't Know About A Cappella Auditions