'This Is the Rebirth' 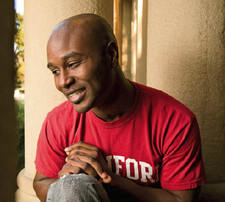 It takes a while before you really get to know Ahmad Ali Lewis. For all his affable openness, the junior sociology major simmers with complexity. He’s 33, a well-remembered former rap star, and a man who talks about Green Library as if it’s paradise. And that’s just for starters.

The rap-star history, of course, is irresistibly flashy. He was 18 when he landed a hit single, “Back in the Day,” on the 1994 pop and R&B charts from his album Ahmad. The message and sound had plenty of street cred, combined with an ironically sweet nostalgia about a dicey South Los Angeles childhood. His enrollment at Stanford, after being named last spring’s valedictorian at Long Beach City College, put him back in the news. The 14-year transition had taken him from nostalgic lyricist to nostalgic celebrity.

But Lewis says he’s defined by new aspirations that divide the present and the past. “I was divorced,” he starts off. “My band disbanded. Music is no longer the center of my existence—it’s academics now. A lot of things that were part of the old Ahmad died. This is the rebirth.”

Music is giving him the chance to elaborate on all that, even though it is a secondary priority. Before dealing with midterms, he was close to finishing an album he enthusiastically titled The Death of Me. Among the lyrics: “Back to college on the low like a panther/Finished as valedict’ then went to Stanford.”

Even if he finds a publisher—indeed, even if he zooms back to the charts—Lewis is intent on ultimately earning a PhD in social welfare. He grew up across the street from a crack house but escaped that environment with a basic positivism. Years later, he gave up life on the road with a band because he didn’t want to relegate his baby son to buses, planes and hotels. All along the way, something in him translated the ups and downs as encouragement for his inner scholar.

Lewis recalls an incident as a high schooler when he narrowly avoided being assaulted by a gang member. It stuck with him in a formative way.

Paulette Holt, Lewis’s mother, says, “I just know that Ahmad was a different kind of kid. He was always focused, and he was ahead of his years.”

She offered him a variety of inspiration, from deep Christian beliefs that influenced his music to the personal fortitude she demonstrated after a divorce from Lewis’s father. Holt made education her bedrock, eventually earning a master’s degree. Now remarried, she works as a psychotherapist at Childrens Hospital Los Angeles.

By the time Lewis enrolled at Long Beach City College, his biography was mostly about resilience. The money from one hit song in the ’90s hadn’t stretched all that far, and he was bitter for years that his second album—infused with Christian convictions that he says displeased the record company—was never released. His second musical identity came with the band, 4th Avenue Jones, that he developed with then-wife Tena Jones. The band dissolved in 2005, though he still wears its name as one of his tattoos, and the marriage unraveled after that. But those were among the evolutions that drew him back to school and on to Stanford.

Stanford had 1,180 transfer applicants for this fall, and Lewis was one of 24 accepted. His financial aid covers tuition and room and board, and he’s receiving a foundation scholarship for other expenses.

Finding a rhythm to life on campus has been a challenge, in part because he spends every weekend in Southern California with his son, now 4. But in most ways, he says, he knows he’s where he belongs.

“Because he has this diverse range of experiences,” says Kate McQueen, a friend at Stanford pursuing a doctorate in German studies, “he’s never going to feel undervalued or question his contributions.”

“People ask, ‘How’s your transition, how are your classes?’” says Lewis. “The underlying question is, ‘Am I intimidated and do I feel out place?’ The answer is, I feel I’m one of the gang, and I’m among peers.”

ONLINE ONLY: Lyrics from "The Death of Me"

The Persecution of Daniel Lee

ONLINE ONLY: Lyrics from "The Death of Me"