‘This Is the Moment We Train For’

Inside a Search and Rescue mission. 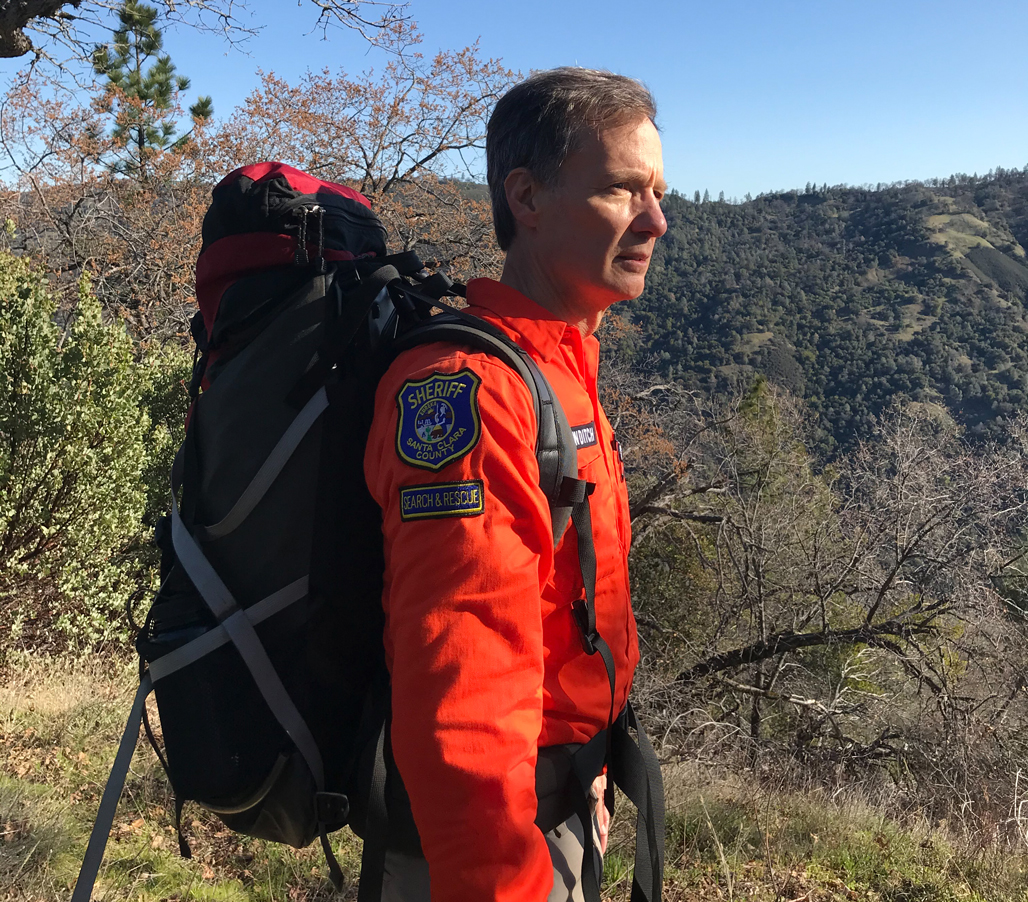 GEARED UP: Bowditch has been volunteering with Search and Rescue for 16 years. Photo: Howard Lee

GEARED UP: Bowditch has been volunteering with Search and Rescue for 16 years. Photo: Howard Lee

I get my bright orange Search and Rescue uniform and dress quickly. The briefing is more than two hours from now, but I know that the best assignments will be filled long before the briefing starts.

In California, Search and Rescue is the responsibility of sheriffs. The Santa Clara County Sheriff’s Search and Rescue team has about 60 people, all volunteers, who train in navigation, first aid, rope systems and wilderness survival. We are called on to search for lost hikers, missing recreationalists and at-risk people around the state. About half of our callouts are within the county, and the rest are mutual aid calls to other counties, often big searches in the Sierras.

I have done more than 100 searches over 16 years. I have recovered 11 bodies from airplane crashes, suicides and people falling off cliffs. But I have also plucked five people out of the wilderness. This and donating platelets every two weeks are my public service activities.  Helping people in their moment of need is the common thread.

There is a traffic jam at the park entrance. The San Jose Police Department has closed the park for this search. An officer sees my uniform and lifts up the yellow tape. The road snakes up the central canyon of the park, with steep slopes on both sides. A mile in, I see the Search and Rescue command vehicle. I park and sign in. It is 7:30.

‘We are lucky. Despondent people or people with dementia are not likely to respond to calls. But this subject knows she wants to be found.’

The organizational structure for searches is pretty simple. The incident commander runs the show and reports to the supervising law enforcement agency. She will assign someone to run plans; that person makes up assignments for teams in the field.

Pretty quickly, the plans person emerges from the command vehicle. He briefs me on the situation: Kathryn (not her real name), a 51-year-old woman, went for a hike yesterday. Based on a picture she sent to her sister, the rangers think she was on the south side of the park near the highest point at 6:10 p.m. An hour later, she texted her sister to say she was off the trail and lost, and asked the sister to call the police. “We got two dog teams out 30 minutes ago,” he says. “I want you to cover this three-mile trail loop that starts where Kathryn left her car.”

Just then, Courtney Pal, ’18, walks up to the command vehicle.

Courtney has been with Search and Rescue for almost three years. She is an EMT, which is above my level of training. And as a member of our mountain rescue specialty team, she is skilled with rope systems and working on slopes. But caution is not in her DNA. I file that away since I am now responsible for her safety.

Our trail starts off as a series of switchbacks every 200–300 feet. Trees and brush cover the slopes. We are much more likely to get a response to our calls than to see the subject. At the first switchback, we stop and we yell:

“Kathryn. Search and Rescue.” Nothing. But after this first call, I realize there is something I do better than Courtney: I can yell much louder. 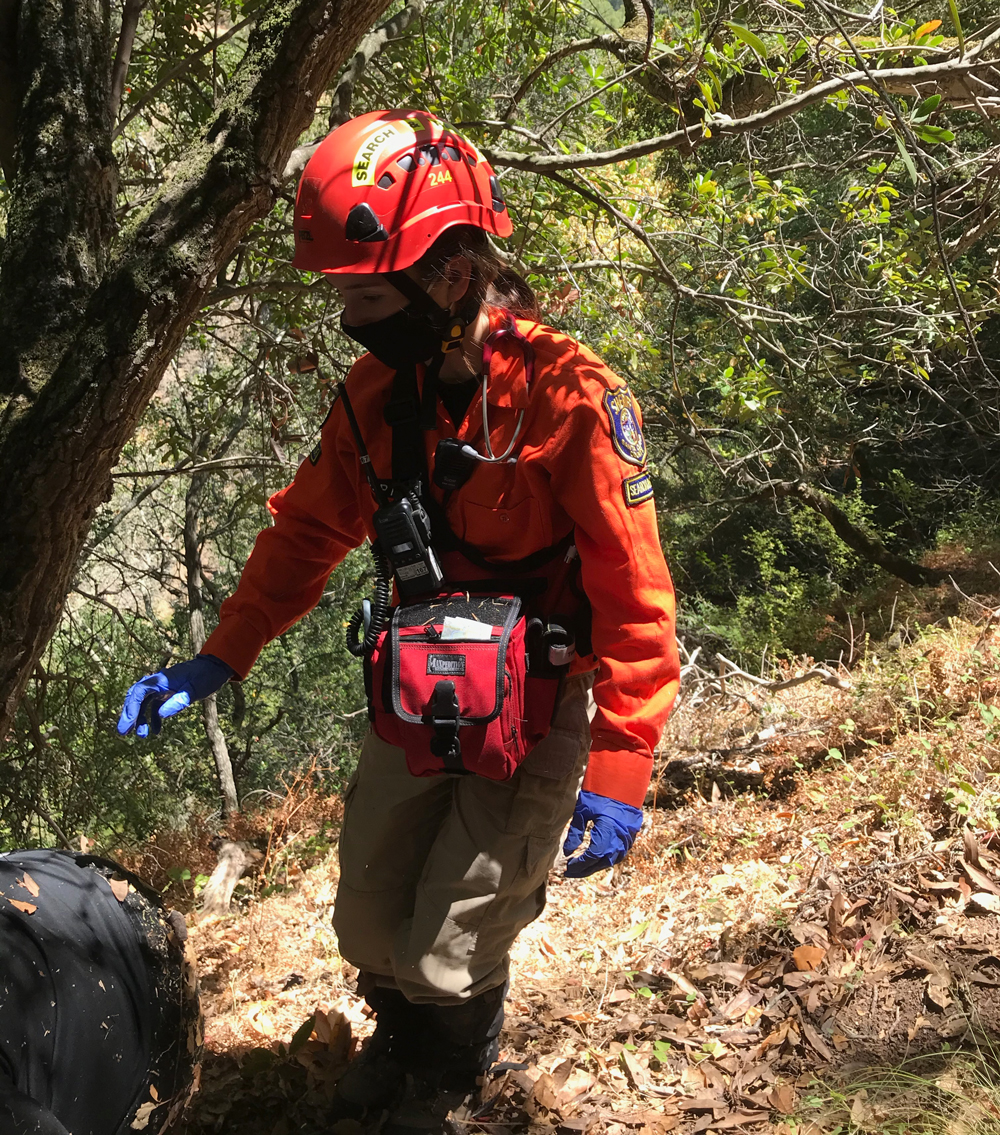 We are lucky. Despondent people or people with dementia are not likely to respond to calls. But this subject knows she wants to be found.

We continue for about 90 minutes, calling frequently. Where the trail offers good views, I pull out my binoculars.

Close to 10 a.m., we run into one of the dog teams. This dog, a German shepherd, will follow a person’s track if given a scent article, such as a sock or pillowcase. The handler and dog train frequently so that the handler knows when the dog is on a scent and when he is not.

“Got nothing,” says the handler. His human partner shares the GPS location where the rangers believe Kathryn took the picture last evening.

We reach the highest point of our assigned trail, 600 feet above the parking lot. Numerous animal trails cross our trail, and we pursue these, as our subject could certainly have mistaken them for official trails in the fading light.

As we are heading back to the main trail from one of the animal trails, I check my GPS.

“We are close to the place the rangers think she took the picture. Do you want to go there?” I ask Courtney.

“Straight up that hill.”

“I’m game.” I knew she would be. Very quickly, it gets steep. I am grabbing saplings and bushes and whatever I can to keep my balance.

“Halfway done with our search. We were close to where Kathryn took the picture last night, so we are going there.”

“Negative, Team 1. I have another team going there. Please continue your assigned search.”

We are most of the way up the hill, and we would have to pull out our ropes to get back down the way we came. I suggest to Courtney that we continue our ascent so we can find an easier way down. Courtney agrees, knowing I have no intention of turning back.

The top, about 900 feet above the parking lot, is open grass with no trails. Once again, we call out. Nothing.

We climbed the northern slope of this hill. As we are resting, the second dog team arrives at the top from the east. I ask them how their climb was. Steep, they say, but we won’t need ropes to get down. “Well, maybe you, Nat, but not Courtney.” Such abuse.

‘As soon as we see or hear someone in need of help, our risk tolerance goes way up. We are on a steep slope, far from any trail, and unable to communicate with our team. This is when searchers get injured.’

Courtney and I begin to traverse the eastern slope. In 10 minutes, we get to some scattered trees, which afford good handholds, and we end up on an outcropping called a spur.

We stop and call out: “Kathryn!”

Courtney and I look at each other, eyes wide. This is the moment we train for.

“Kathryn. This is Search and Rescue. Please call again.”

We verify that she is safe and uninjured. I tell her to stay put and that an EMT is going to come to her. “Thank you for finding me,” she calls back.

I try my radio but get no response. My cell phone, too, is out of range.

This is the most dangerous part of any search. We are cautious when searching for someone. But as soon as we see or hear someone in need of help, our risk tolerance goes way up. We are on a steep slope, far from any trail, and unable to communicate with our team. This is when searchers get injured. I know Courtney carries rope, and I tell her to use it if the hillside gets too steep. And then she is off, making quick work of the slope before disappearing in the trees.

I send a message with my GPS unit, which has text capability through a satellite network.

“Subject found alive,” I send to Jackie, who runs the team. I am guessing Kathryn’s sister is standing at the command post, four hours into a search that has, until now, yielded no clues. I am hoping Jackie gets to share my text with her, especially since it always falls on Jackie to share bad news with family members.

Courtney calls: “Nat, I reached Kathryn. She is in good shape. She spent the night here after looking for a shortcut down from the top.”

Now we have to figure out how to get her out. If we set up a rope system and litter to transport her over the steep terrain, we will run out of daylight. The creek is more than a half mile downhill, and the top of the hill is not flat enough to land a helicopter. We agree we need a short haul.

A short haul is a helicopter extraction that does not require the helicopter to land. Cal Fire is really good at these. They lower a paramedic on a cable, and he or she prepares the subject to be lifted to safety by the helicopter. I climb to the top of a spur. I get one bar on my phone, which is enough to reach the command post and make the request. 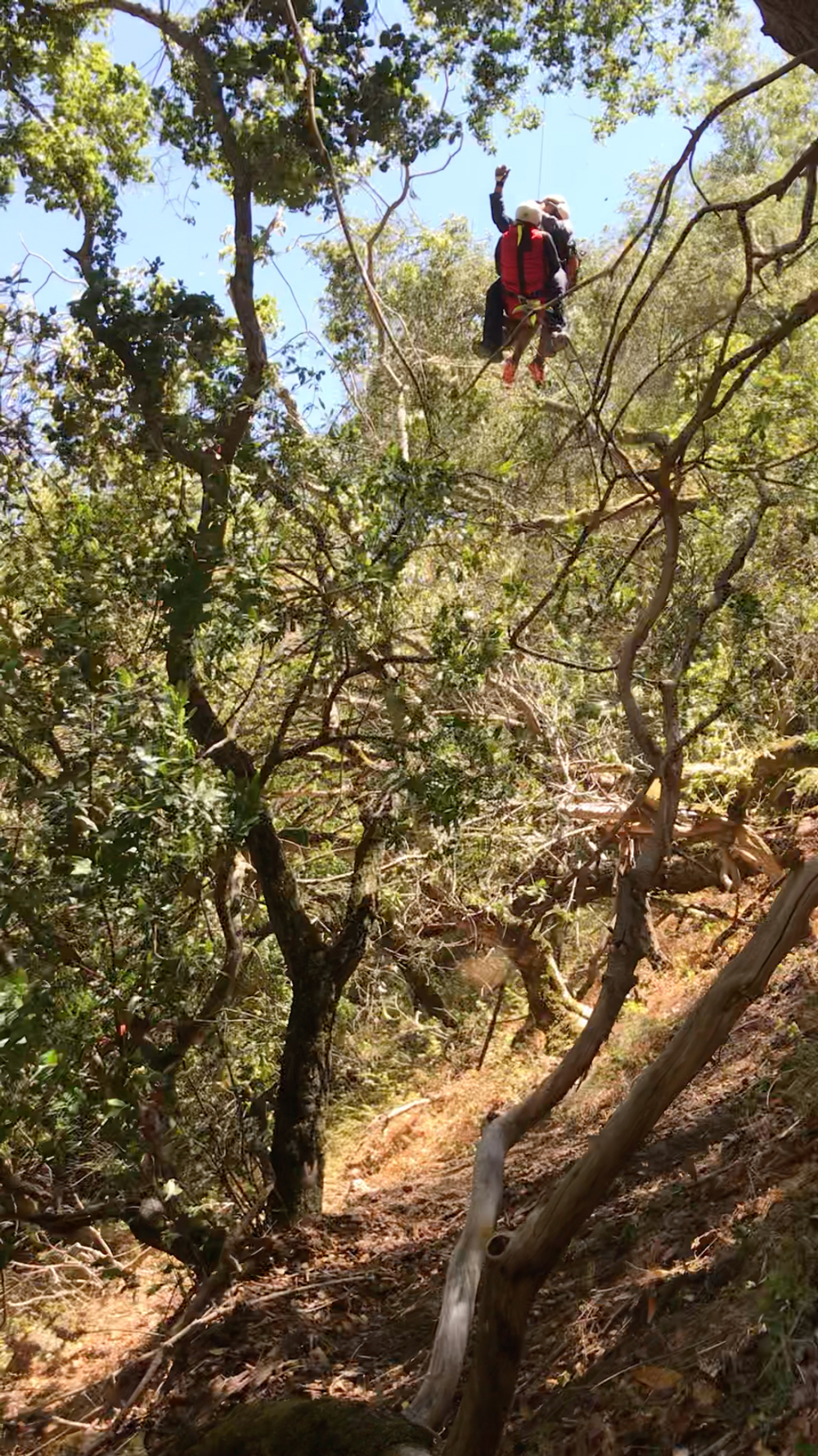 UP, UP AND AWAY: Kathryn being airlifted to safety. (Photo: Nat Bowditch, MS ’84)

I start down the slope toward Courtney, and I soon hear a helicopter overhead. I am unable to reach the helicopter on the radio, so I pull out an 8-by-12-foot piece of blaze-orange nylon material, step into the sunlight and start waving it. I point in Courtney’s direction, about 80 feet away. Knowing Kathryn is nearby, the Cal Fire helicopter moves away to lower the paramedic.  I scramble toward Courtney, climbing over fallen tree trunks, hoping not to dislodge them. Finally, I see Courtney’s bright orange shirt. I arrive a minute before the Cal Fire paramedic emerges through the trees.

Courtney gives a 30-second summary of vitals, and then the paramedic engages Kathryn.

The paramedic smiles. “We have a present for you. You are going to ride in a helicopter.”

The paramedic and Kathryn walk 20 feet to an opening in the canopy. He puts a helmet on her and helps her, and then himself, into the two-person harness in which they will be lifted.

“Ready for the cable.”

The helicopter moves directly overhead and lowers the steel cable. The paramedic grabs it, attaches it to the harness, and flashes a thumbs-up. Within seconds they are off the ground, through the canopy, and away.

We have a long way back to the command post, but a hero’s welcome awaits. The whole team did wonderfully. This is as good as it gets.

Nat Bowditch, MS ’84, recently moved from Menlo Park to Chapel Hill, N.C., and works at Scion NeuroStim, which is developing a treatment for Parkinson’s disease. Email him at stanford.magazine@stanford.edu.

The view from the ICU, 12 months later.