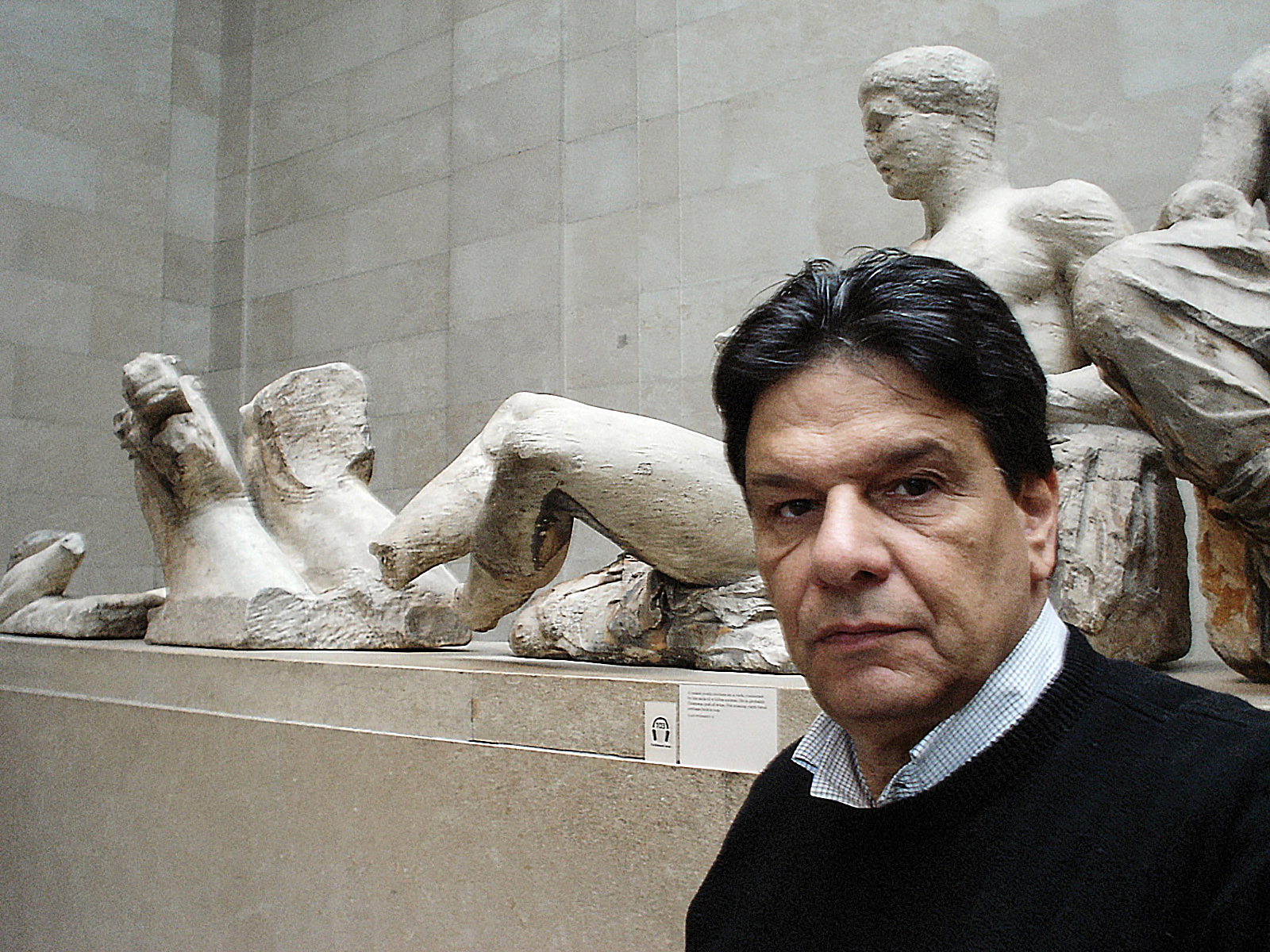 Mantheakis at the British Museum near the Parthenon sculptures. Photo: Alexis Mantheakis

Mantheakis at the British Museum near the Parthenon sculptures. Photo: Alexis Mantheakis

His home may be in Athens, his name as Hellenic as they come. But when Alexis Mantheakis speaks English, his accent is as classically British as a bowler hat. Twelve years at English-run boarding schools don’t fade so easily.

It’s perhaps the perfect background for someone dedicated to prying out that long-lodged burr in Anglo-Greek cultural relations: Who should own the 2,500-year-old Parthenon Marbles?

More than two centuries ago, the classical Greek masterpieces were trundled out of Athens on the order of Lord Elgin, the British ambassador to the Ottoman Empire, which then ruled Greece, though not necessarily with great care. In 1687, the Ottomans used the Parthenon as a gunpowder dump during the war with Venice, leading to catastrophic damage once mortars started falling on the ancient temple.

Claiming Ottoman permission, Elgin indulged his passion for ancient Greece by bringing the marbles to England, soon selling them at a loss to the British Museum, where they’ve enjoyed pride of place ever since. But if they’ve delighted millions, they’ve also infuriated many, not least Mantheakis, ’67, who has spent the past decade trying to ratchet up pressure for the return of what he sees as looted booty. 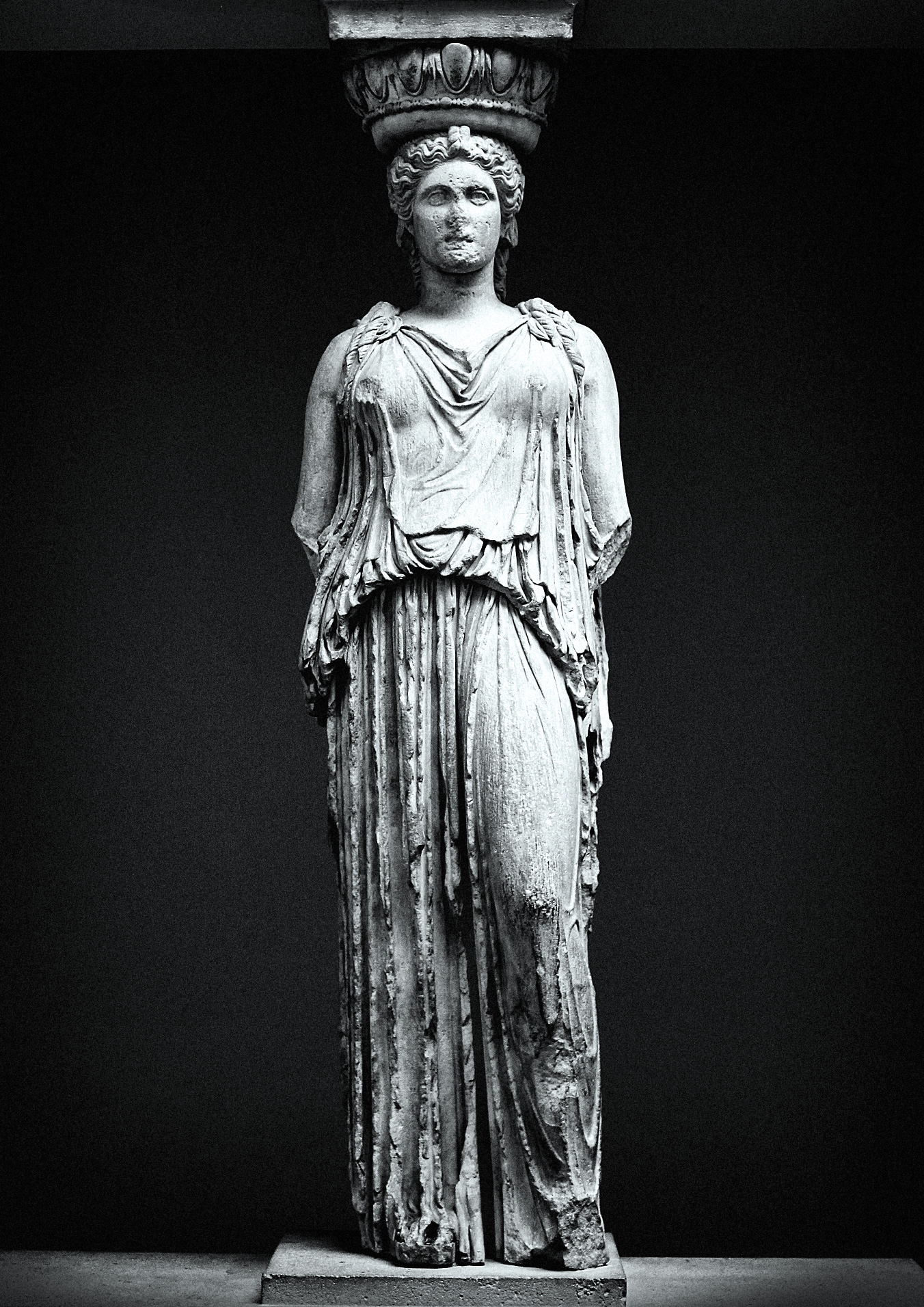 A SOLITARY FIGURE: Six caryatids once stood at the Erechtheion, on the Acropolis. Lord Elgin shipped this one to England, where it is on display at the British Museum in London. The other five are held at the Acropolis Museum in Athens. (Photo: Ares Kalogeropoulos)

There’s no shortage of others with similar views. But Mantheakis, who helms a group called the International Parthenon Sculpture Action Committee, says his peripatetic upbringing gives him a distinct voice.

He can put on a tuxedo and hold court in front of the Oxford University Student Union, as he did at its invitation in 2016. But more important, he says, he can share his knowledge of British mentality in Greece, which boils down to a belief that you’ll get further using elbows than with the gentle nudges Greek politicians have traditionally used in making their case.

It’s an outlook based in no small part on his childhood growing up in a Greek family in colonial East Africa, where he attended the Prince of Wales boarding school in Nairobi, Kenya, with hundreds of children of a fading empire.

His youth coincided with Kenya’s struggle for independence, which succeeded just three months after he left for Stanford. And in recalling the collapse of colonial life after years of opposition and protest, he sees a lesson for today: It pays to be demanding with the British.

When Greece opened its $179 million new Acropolis Museum at the base of the Parthenon in 2009, Mantheakis lobbied against British officials’ being received on its steps and led a street protest against Britain’s refusal to give the marbles back for housing in the new world-class museum.

‘If Britain could give back India, then surely the emptying of one room of a London museum is a small price to pay to right a historical wrong.’

“Enough with the excuses,” he told the New York Times. “The Parthenon Marbles now have a new Greek home.”

Mantheakis was 5 years old when his father first took him from Kenya to see the Parthenon, whose instantly recognizable columns sit atop the Acropolis in Athens. His father’s main purpose for the European trip, though, was to sign his son up for a future place at Trinity College, Oxford.

Those plans ended in a fit of rebellion his senior year. Mantheakis decided to go as far from England as possible. He applied to Stanford after a family friend assured him it was Harvard-quality but farther away.

It was in Stanford’s Western Civ classes that he got his real education on the importance of ancient Greece to the development of democracy and Western history. Still, it was hardly something he imagined focusing his life on.

He’d been an artist and a writer at Stanford, and he had a knack for getting press attention. He left in June 1966 to pursue an acting career in Greece, then a frequent backdrop for Hollywood productions. He was quickly cast in Oedipus the King, starring Orson Welles and Christopher Plummer.

But the Greek military coup in 1967 shut down the country’s film industry, and Mantheakis, who is married to Greek author Dimitra Mantheakis, has since pursued a varied career that has included writing books, hosting television productions, and acting as spokesman and adviser for heiress Athina Onassis’s family. 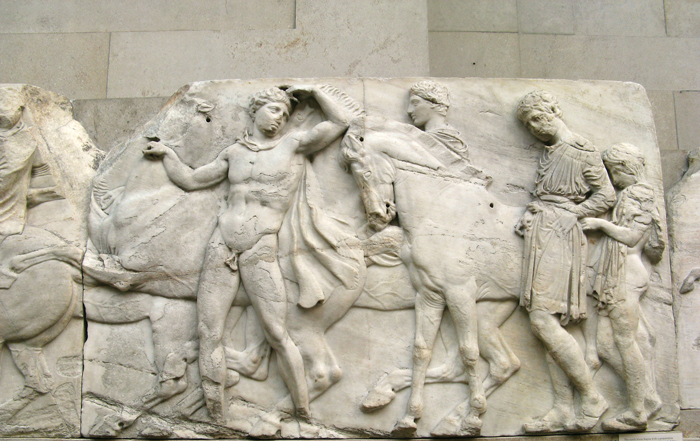 HOLDING THE HORSES: A section of the north frieze of the Parthenon is on display at the British Museum. (Photo: Yair Haklai/Wikimedia Commons)

The Parthenon Marbles only became a front-burner issue for him about a decade ago, when he read of plans to make part of the new Acropolis Museum an annex to the British Museum to entice England to bring the marbles back. To Mantheakis, it represented capitulation.

In the years since, Mantheakis has kept busy on the issue, speaking at symposiums, pushing the issue on social media and keeping journalists around the world fed with choice quotes. “If Britain could give back India, then surely the emptying of one room of a London museum is a small price to pay to right a historical wrong,” is one he trots out a lot.

He has advocated using Brexit to leverage demands for the marbles, but has received little support from Greek politicians for that strategy. Still, he thinks victory is ultimately inevitable. In an era of global reckoning about racism, colonialism and privilege, public support in Britain for the marbles’ return is growing ever stronger. A 2014 poll found 37 percent of Britons felt the marbles should be returned. Just 23 percent wanted to keep them. (Another 32 percent didn’t mind either way, and 7 percent didn’t know.)

Ioannis Georgopoulos, who edits the website Archaeology News Network, credits Mantheakis for not only rallying attention to the Parthenon issue but also helping create wider opposition to museums with “plundered heritage.”

Disagreements endure, including whether the Parthenon sculptures fit that broader group of pilfered goods. A Guardian columnist recently questioned the view “that ancient Greece, a civilisation that flourished 2,500 years ago, is somehow the cultural possession of modern Greece, that its achievements belong to Greece in some narrow national way.”

But for Mantheakis, the marbles belong in Athens as a clear matter of justice, one he thinks is just a stone’s throw from being realized. Until then, he’ll speak poshly and carry a big stick.

Sam Scott, a former senior writer for Stanford, was born in England, grew up in England and the United States, and now lives in Toronto. Email him  at stanford.magazine@stanford.edu.