The Truth Is Out There 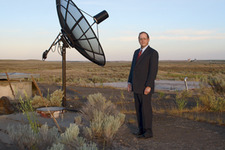 Wednesday, March 7, 12:30 p.m.: Peter Davenport is halfway through a roast beef sandwich when the telephone in the spare room rings.

He listens patiently as the caller describes watching a strange airplane fly overhead and then inexplicably disappear. “Are you sure it didn’t just fly behind some clouds?” asks Davenport, ’69, scribbling on a notepad. But the caller is adamant, so Davenport asks him to submit a written account of the experience.

“Not a solid report, I’m afraid,” he says, returning to his lunch. “About 90 percent of what we receive is a hoax or a case of mistaken identity.”

It is the other 10 percent that keeps Davenport committed to NUFORC, the Harrington, Wash.-based organization he has run almost entirely on his own for 12 years. Founded in 1974 by noted UFO investigator Robert Gribble, the center is one of only a handful of major organizations in the United States that document and publish reports of bizarre, possibly UFO-related events. An average of 40 reports a day come in via the 24-hour telephone hotline maintained by Davenport; witnesses also can contribute reports through the center’s website.

Davenport receives no salary and supports NUFORC with his own financial resources, in tandem with the occasional contribution from donors. He says the center costs him about $800 a month in operation expenditures, not to mention the wages he might earn by another means of employment.

“There is really no adequate reason to explain why I do this,” Davenport acknowledges. “I simply believe that this evidence is of supreme importance to the American people.”

Davenport first became interested in UFOs at the age of 6, when he and his family witnessed a strange object hovering over their 1953 Studebaker at a drive-in movie theater in St. Louis. A decade later, a sighting in New Hampshire compelled him to write two investigative articles for a local newspaper. He spent the next few years in the Army and subsequently graduated from Stanford in 1974 with degrees in biology and Russian, as well as a translator’s certificate.

Over the years, Davenport worked in various capacities as a fisheries biologist, a translator, a securities broker and a research assistant for the Washington State Legislature, among other things. In the early 1990s he became affiliated with the Mutual UFO Network, through which he came in contact with Gribble and NUFORC. When he learned in 1994 that Gribble was retiring and would be forced to shut the center down, Davenport volunteered to take over.

In addition to overseeing daily operations, Davenport is a regular guest on radio shows and a frequent speaker at symposia. One of his better-known contributions to the field of ufology is a proposal to build a radar system to detect UFOs in the near-Earth environment. Davenport estimates the system would cost about $100,000 to build—a small sum compared to the $25 million Allen Telescope Array the Mountain View-based SETI Institute (Search for Extraterrestrial Intelligence) built to detect signs of intelligence beyond the Milky Way. But Davenport says it has been nearly impossible to find individuals willing to donate the necessary funds to look for the possibility of intelligent life so close to home.

“There are some things that are so far beyond our version of reality, we cannot even begin to comprehend them,” says Davenport. “I liken it to the radio waves that hit us every day. We have the evidence that they are around us, but we choose to ignore them because there are so many other things [to perceive].”

Despite the connotations of the word UFO, Davenport insists that his job is to collect evidence of unexplained phenomena and not to conjecture what might be the cause of these events. But just the process of documenting the reports has yielded some interesting conclusions about humans, if not the phenomena themselves. It appears that a significant percentage of people who submit dubious UFO sighting reports have recently experienced a traumatic life event—a divorce, the death of a child, loss of a job. It’s an observation that provides an interesting peek into the human psyche, as well as an immediate indication that the report in question might be informed by something other than an eyewitness account.

Which is not to say that emotionally unstable individuals submit all of the reports. “People always ask, ‘If these events really occur, then why don’t scientists give reports?’ They do. ‘Why not pilots?’ They do, and they do all the time.”

They did last November when a disc-shaped object was seen flying over O’Hare airport in Chicago. Airport officials shrugged it off, but the Chicago Tribune verified the sightings by obtaining, through the Freedom of Information Act, a transcript of FAA conversations with pilots in the area. The FAA did a minimal investigation of the incident.

Davenport has been contacted on several occasions by members of the U.S. government, but the center’s long-held policy promising anonymity to anyone who requests it prevents him from going into the details of these conversations. It is a policy that Davenport has reconsidered many times, not only to lend legitimacy to his much-maligned area of research, but also to punish the pranksters who call the hotline by the hundreds. He says the most frustrating part of the job is knowing that the vast majority of his data—the NUFORC website alone contains more than 40,000 reports—will go uninvestigated by the media, scientists and the American public.

“I couldn’t give away this data if I tried, and believe me, I’ve tried,” Davenport says. “I’ll call up a reporter and ask them if they’ve heard about a strange object flying over an airport. And they’ll say, ‘Who are you? UFOs? Not interested.’” Davenport hopes to archive the data during the next few years, and is certain that one day his work will be valued. He’s just not sure it will happen in his lifetime.

“UFOs are a very controversial and emotional subject,” says Seth Shostak, a senior astronomer at the SETI Institute. “But Davenport is a reasonable guy, and it would be silly not to look at a phenomenon that so many people have claimed to have experienced. It’s difficult to [come up with] conclusive evidence, but the more convincing cases he can find, the more important his work is.”

For now, Davenport hopes that a more impressive headquarters will lend the center more credibility. NUFORC operates out of the director’s residence—a setup that allows the hotline to operate day and night. About a year ago, Davenport moved to Harrington, Wash., from Seattle after purchasing an abandoned underground missile silo on the outskirts of town. He plans to remodel the cavernous construction into a unique home for himself and the center.

“It will certainly be more solidno, as the Russians say,” Davenport notes. “And in the event of some sort of nuclear war, I will be the most popular person in Washington.” Or perhaps in the universe.

MARIE CANNIZZARO, ’06, a former Stanford intern, is a writer in New York City.