The Real Scoop on the Women's Health Studies

No, you can t eat anything you want, despite what the headlines say. 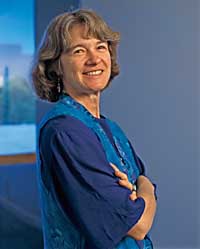 A former marathon runner, Marcia Stefanick walks at least 30 minutes every day and finds time for two five-mile runs on the weekends. Although breakfast is sometimes a latte to go, she always has a healthy dinner of veggies and whole grains.

The 54-year-old research professor of medicine at the Stanford Prevention Research Center could well be the poster person for women aged 50 to 79. As chair of the steering committee of the Women’s Health Initiative, she’s also in a unique position to deliver the complicated findings of three long-term studies about the causes and prevention of diseases affecting women in that age range.

The WHI studies about the effects of hormone therapy, diet and calcium are part of the biggest women’s health research effort ever. Some 162,000 women nationwide, 18.5 percent of whom are members of minority groups, participated in WHI clinical trials and observational studies over 15 years. “We’re almost certainly going to try to get funding to continue to follow participants for as long as we can,” Stefanick says. “We’ve collected blood and DNA on all of these women, so we have an amazing population for doing genomics and proteomics.”

Stefanick, PhD ’82, says she’s been frustrated that some science writers and general-assignment journalists have failed to understand the complexity of the studies. “Scientists are not good at sound bites,” she notes. “We’re try­ing to be precise and very careful about what we say, but the message is complicated.”

The WHI paper about the results of a study of nearly 49,000 women published in the February 8 Journal of the American Medical Association, for example, showed that women who consumed the most fat at the beginning of the study saw a modest reduction in breast-cancer risk when they switched to a low-fat diet. But the results were not statistically significant.

Some headline writers took this to mean there was no major benefit from a low-fat diet. WHI researchers take it to mean that the women need to be followed for a longer period and that additional studies that distinguish between “good fats” and “bad fats” need to be done. “We need to set the record straight—that, no, you can’t just go and eat all the fat you want,” Stefanick says. “We really would encourage you to eat a low-fat diet.”

Another study of more than 36,000 postmenopausal women, published in the February 16 New England Journal of Medicine, found that those who took calcium and Vitamin D supplements had a slightly decreased incidence of hip fractures. But those women also had a slightly increased incidence of kidney stones. Stefanick says women over 50 should continue to consume 1,200 milligrams of calcium and between 400 and 600 international units of Vitamin D for bone health.

An earlier portion of a clinical trial of hormone-replacement therapy was halted in July 2002 when researchers found that women who still had a uterus and were taking a combination of estrogen and progestin had increased rates of breast cancer and cardiovascular disease. But Stefanick says that a separate trial of women who’d had a hysterectomy and were taking only estrogen found a balance between HRT risks and benefits. “People can’t get it straight that we’re talking about two different groups of women and two different drugs,” Stefanick says.

Stefanick has been involved with the WHI since 1994, first as a principal investigator at one of the 40 centers nationwide that enrolled women in the studies, and then as chair of the WHI steering committee. As she looks to future research, she thinks she might examine sleeping disorders in menopausal women, or gender differences in cardiovascular disease, or risk factors for osteoporosis in men. “WHI has given me as least three new paths to follow,” she says.

Other WHI researchers have their sights set on all those samples of blood and DNA that have been collected from participants. “There are a lot of opportunities that we didn’t even envision in the beginning because the technology wasn’t anywhere there,” Stefanick says. “But now we’ve got the samples, and we know what to do with them and there’s a lot of interest from the investigators in going out and [studying] the daughters [of participants].”