The Possibility of a Solar-Powered Nation: Nitty-gritty

Q: Given an appropriate location, how large a solar array would it take to power the entire United States, assuming present efficiency levels? How much CO2 would be released to the atmosphere in producing those panels? What other harmful byproducts would be produced, and how much?

A photovoltaic (PV) panel is a solar panel that directly converts sunlight (photons) into electricity (volts), hence the term “photovoltaic.” There are two main types of PV cells: silicon-based cells and thin-film cells, which are mainly made of either copper indium gallium (di)selenide (CIGS) or cadmium telluride (CdTe). No matter what the specific starting materials, the idea is to use the energy of the sun to energize or “excite” electrons in the panel, channeling them into an electrical current.

Mining silicon to make silicon-based cells is an expensive process that emits a lot of carbon dioxide. Silicon-based panels are well established in the market, but are rapidly being replaced by more efficient thin-film technologies.

In general, silicon is less cost effective, but the panels are more space efficient. Therefore, in city centers and on small roofs (where land or surface area is expensive), silicon-based solar panels make more economic sense than thin-film technologies. On the other hand, for large solar farms where land is abundant and cheap, thin-film technologies are becoming more popular.

But how do these technologies, and others, differ in their environmental effects? 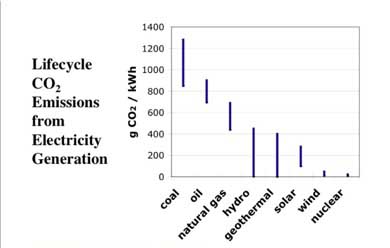 Many chemicals are used to make different types of photovoltaic cells. Here are some of the most common chemicals associated with solar panel manufacturing and their impacts.

Lots of energy is used to generate the high temperatures necessary to make this material—silica ores must be melted at more than 4,000 degrees Fahrenheit before the purified silicon is allowed to crystallize. It’s the crystalline structure that gives c-Si the semiconductor properties that make it so valuable for PV cells and for computer chips, too.

The manufacturing process also releases silicon tetrachloride, an extremely toxic substance that reacts violently with water, causes skin burns, and is a respiratory, skin and eye irritant. And then there’s sulfur hexafluoride—an extremely potent greenhouse gas, 23,000 times worse than CO2—which is used to clean the reactors used in silicon production. In developed countries, these extreme molecules are usually captured and reused in a closed-loop process, but that’s not always the case elsewhere. There are reports from China, for example, of silicon tetrachloride pollution from new PV cell factories that are springing up in response to the global demand for solar electricity.

Cadmium is a toxic, cancer-causing heavy metal. It’s nasty stuff, but expensive, too—and that means double the incentives to keep it under control and out of the air and water. Cadmium rinsed away during the production of CdTe films could potentially pollute water systems, but it is generally reclaimed and reused in other steps of the thin-film manufacturing process. Still, about one percent of the cadmium used as input is disposed of as waste. And there’s a risk that cadmium could be released from thin-film panels installed in homes in the event of a fire.

Hydrogen selenide, which is used in the manufacture of CIS, is toxic and dangerous even at very low concentrations. Manufacturers are developing new processes that avoid its use, or substitute it with solid selenium, which largely obviates this hazard. Another concern is that selenium dioxide can sometimes form at high temperatures during the manufacturing of these cells. It is a dangerous air pollutant, and can pose health risks to workers.

Burton Richter, a Nobel laureate in physics and Stanford professor emeritus, gave a presentation at Stanford in which he explained the health impacts of the different types of energy and electricity generation. The studies used in his presentation show that virtually all of the health impacts—from coughs in asthmatics to heart diseases—of solar power are lower than those of coal, lignite, oil and gas. Other studies have also supported these observations. These impacts can be lowered even further, through regulatory oversight of solar panel manufacture and disposal.

The main obstacle to large-scale commercialization of solar power boils down to economics. Currently, the solar industry can produce electricity at costs ranging from 15 to 22 cents per kilowatt-hour, but energy customers only pay 7 to 13 cents per kilowatt-hour for their energy, which largely comes from coal, petroleum and natural gas power plants. With government subsidies in states such as California and cash-back incentives for customers, renewable energy sources such as solar are becoming more popular. For example, here at Stanford, the Palo Alto Utility Company gives us students the option to purchase all our electricity from wind and solar farms for only 1 cent more per kilowatt-hour than we would pay for energy generated from conventional sources. (Solar actually costs 5 cents more per kilowatt-hour to produce.) My roommate and I went straight for it.

Researchers predict that the solar industry will eventually reduce its cost of producing electricity down to 10 cents per kilowatt-hour. Some companies and independent research programs, such as Nanosolar and Palo Alto Research Center (PARC), claim that they can already do so. Such a cost reduction might very well make solar power the new wave of clean energy—as long as it comes with careful attention to the dirtier aspects of solar panel production.

The U.S Occupational Safety and Health Administration (OSHA) has already set policies to safeguard employees in solar panel manufacturing factories. The Obama administration is taking steps to further improve the renewable energy industry, with a focus on economic viability, sustainability and environmental responsibility. Such steps could help solar power’s benefits shine bright, and in time, give way for a grand plan for solar energy.

Shaker Muasher plans to receive his bachelor’s degree in international relations, with minors in economics and energy resource engineering, in June 2010.

The Possibility of a Solar-Powered Nation: Essential Answer

The Possibility of a Solar-Powered Nation: Essential Answer