The school of the future.

Stanford’s first new school in more than 70 years will launch this fall. The Stanford Doerr School of Sustainability, made possible by a $1.1 billion investment from John and Ann Doerr along with gifts from other philanthropists, aims to catalyze interdisciplinary efforts to tackle urgent climate and sustainability challenges facing the planet. “The school will build fundamental knowledge of the Earth and its systems, accelerate the development of solutions to the climate crisis at the scale that is needed, and educate tomorrow’s problem solvers and change makers in this urgent area,” said President Marc Tessier-Lavigne in a message to the Stanford community.

The school will be anchored by two new flagship buildings and have a three-part structure: academic departments that will launch with about 90 existing faculty, including those from the School of Earth, Energy and Environmental Sciences; interdisciplinary institutes to bridge areas of scholarship across the university; and a sustainability accelerator to drive policy and technology solutions. Arun Majumdar, a professor of mechanical engineering, a senior fellow and former co-director of the Precourt Institute for Energy, and a senior fellow at the Hoover Institution, will serve as dean. “As is often said, we do not inherit the Earth from our ancestors, we borrow it from our children,” Majumdar told Stanford Report. “We must create a future in which humans and nature thrive together.”

Opening up about well-being.

In a recent special issue of the Stanford Daily, students laid bare their feelings of disconnection and self-doubt, with many calling for improved campus mental health resources. But they also discussed the manifold ways in which they were able to manage difficult feelings. Whether it meant they received medication, support from family and friends, or a sense of purpose in their communities, opening up about the struggle proved valuable for each of them.

May is Mental Health Awareness Month, so check out Stanford magazine’s collection on the topic. Learn about the subtypes of anxiety, get tips on resilience, and discover ways to maintain a healthy mood.

Then there’s hypnosis. If the word makes you think about pocket watches swinging side to side and someone clucking like a chicken, think again. Hypnosis has a robust scientific framework and has been used in clinical settings to treat a number of health issues, including anxiety. And about two-thirds of adults are susceptible to the technique. David Spiegel, associate chair of psychiatry and behavioral sciences, told Time magazine that hypnosis is similar to a “flow state,” an altered state of consciousness in which a person is so immersed in an activity that their focus narrows and their sense of time shifts. And it can be DIY, too. In 2020, Spiegel co-developed the self-hypnosis app Reveri, which aims to lead users toward personal goals (decreased stress, improved diet, better sleep habits) through hypnosis exercises. No pocket watch required.

No releaf needed: Meet the plant that thrives under pressure.

Humans aren’t alone in their battle against stress. When plants are confronted with challenging conditions, they struggle too. Except for Schrenkiella parvula, which, uh, embraces stress. This scraggly, branching member of the mustard family is found on the shores of Lake Tuz, in Turkey, where high salt concentrations in the water would kill many other plants. “Most plants produce a stress hormone that acts like a stop signal for growth,” associate professor of biology José Dinneny told Stanford Report. “But in this extremophyte, it’s a green light. The plant accelerates its growth in response to this stress hormone.”

Now that Dinneny and his colleagues understand how the genetic code of Schrenkiella parvula responds to the hormone, called abscisic acid, they’re trying to engineer other plants to follow suit. “With climate change, we can’t expect the environment to stay the same,” said Ying Sun, PhD ’20, a postdoctoral researcher at the Salk Institute and a lead author of the paper. “If we can understand the mechanisms that plants use to tolerate stress, we can help them do it better and faster.” 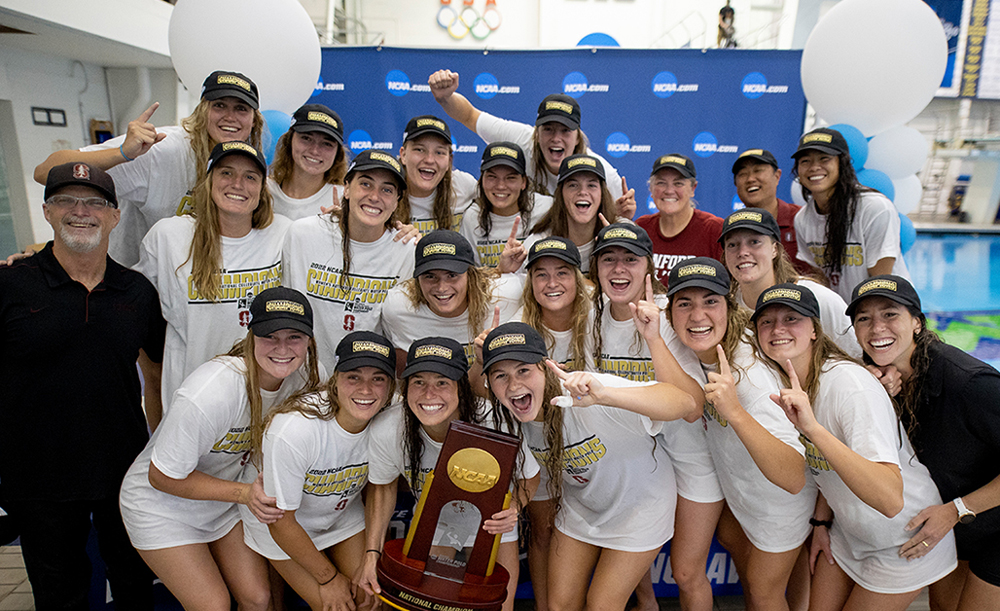 No. 1 Stanford women’s water polo scored its eighth NCAA championship on Sunday, defeating USC 10–7. The match marked the final game for NCAA Tournament MVP Makenzie Fischer, ’22, who scored four goals. She is Stanford’s all-time leading scorer. Alongside her in the pool was her sister, junior Aria Fischer. The pair have been fixtures in United States women’s water polo since they joined the national team in 2015—the same year the U.S. began a track record of winning every major global title. “They’re irreplaceable,” said U.S. national team coach Adam Krikorian.

When professor of neurology Michelle Monje, MD ’04, PhD ’04, first became interested in studying diffuse intrinsic pontine glioma (DIPG), a swiftly lethal pediatric brain cancer, her colleagues warned her against it. DIPG was a research dead end, they said, hard to study in the lab because scientists couldn’t get tissue—the tumor entwines itself in the brain stem and makes biopsies all but impossible. But in 2008, the family of a 5-year-old patient donated his tumor posthumously to Monje’s lab, where she then created the first-ever cell culture and mouse model of DIPG. Since then, she has defined a new field of research (cancer neuroscience), earned a MacArthur Foundation “genius” grant, collaborated with Stanford colleagues to develop a revolutionary DIPG treatment that can shrink tumors and extend patient lives, and changed the way scientists think about all manner of brain tumors.

“We’re seeing some incredible responses,” Monje said in Stanford magazine. “In some ways, it’s almost more devastating when I lose a patient now, because I start out thinking maybe we’re going to cure it this time. It feels that close.”

Duh, your teenager is not actually listening to you.

We all know that teenagers tune out their parents, but the School of Medicine has uncovered some of the biology behind the eye roll. In utero and in childhood, kids’ brains are specially attuned to their mothers’ voices. But when they hit the age of 13 or so, they begin to prefer unfamiliar voices. “There’s nothing jaw-dropping here,” Daniel Abrams, an associate professor of psychiatry and behavioral sciences, told the San Francisco Chronicle. “We know the kids turn away from their parents to focus their social efforts on new social partners and peers during this stage. What is new and important is to show there’s this neural signal in the brain’s reward system that reflects this preference for unfamiliar voices.” So the next time your teen ignores you, try not to internalize that sting of abandonment. “It’s not personal,” Abrams said.

On Sunday evening, Student Affairs received a report of a noose in a tree outside Branner Hall. Stanford’s Department of Public Safety removed it and is investigating the incident as a hate crime. “We cannot state strongly enough that a noose is a reprehensible symbol of anti-Black racism and violence that will not be tolerated on our campus,” said vice provost for student affairs Susie Brubaker-Cole and vice provost for institutional equity, access and community Patrick Dunkley in a message to the campus community. University president Marc Tessier-Lavigne wrote to the community to convey his outrage, calling the incident “deeply disturbing.”

“College is the time to be challenged. . . . We must take advantage of that.” Sophomore Katie Eder writes in the Stanford Daily on why no student statements written in chalk in White Plaza, whether for or against Roe v. Wade, should have been washed away.

When the Space X Dragon spacecraft launched on April 27, Jessica Watkins, ’10, became the first Black woman to embark on an extended space mission. She’s in the early days of a nearly five-month stint on the International Space Station.

Engineers at Stanford and, ahem, Stanford of the East have developed a new method of 3D printing no longer bound by the limitations of layering material on top of itself. Using a container of gelatinous resin, a laser and some cleverly designed nanomaterials, scientists harden the resin with blue light, resulting in support-free printed objects similar to “an action figure floating in the center of a block of Jell-O.”

Is the pandemic a catastrophe, manageable or an opportunity? According to associate professor of psychology Alia Crum, your answer to that question in the early days of the pandemic likely affected your well-being in the months that followed.

It’s been 10 weeks since the invasion of Ukraine began. This roundup of Stanford scholarship and insight can help you understand the impact as the situation progresses.

You’re an animal. Unfortunately, what that means for recreational runners is that regardless of the distance you travel, you will run at the same calorie-saving pace. That’s according to Scott Delp, MS ’87, PhD ’90, a professor of bioengineering and of mechanical engineering and director of the Wu Tsai Human Performance Alliance, who studied data from 4,600 runners and discovered that our physiology is tuned to conserve energy pretty much no matter what. Which means that if you’re trying to lose weight or increase endurance, you’re gonna need to find your personal optimal speed and then push above that. Evolution is swell.

On the flow of war information; sleep tips; when you’ve got 100 years to live

Dams help us. Dams harm us. Now, longtime adversaries are coming together to bridge that uncomfortable divide.