Stanford Olympians; do we really need a meeting?; extreme weather

At the Rio Olympics in 2016, Simone Manuel, ’18, won four medals and made history as the first Black woman to win individual gold in Olympic swimming. Five years later, she seemed set to miss the Games altogether. At the U.S. Olympic trials in June, she failed to advance to the final of the 100-meter freestyle, the event she won in 2016. In an emotional news conference, she explained she’d been struggling under the mental and physical pressure of the extra year of training forced by the postponement of the 2020 Olympics. Three days later, she bounced back in remarkable fashion in her last chance to qualify, winning the 50-meter freestyle by 0.01 seconds. “This year has been difficult, especially the last couple months,” Manuel said after the race. “But before I dove in, I felt like it was my moment.”

To the surprise of many, Nneka Ogwumike, ’12, a six-time WNBA All-Star, will not be making the trip. She suffered a knee sprain last month. She also missed out in 2016 despite having been named the WNBA’s MVP that year.

Here’s the full list of Stanford athletes to watch for. And before you settle into your seat to armchair-judge the Games (Jazzy Kerber, ’20, MA ’21, will get you up to speed on rhythmic gymnastics scoring), take a trip down Cardinal memory lane with Stanford magazine's collection of Olympics stories.

You’re not crazy. Your seasonal allergies probably are getting worse, at least if you live in the Bay Area. And you can lay the blame on climate change. According to a study from the School of Medicine, increasing temperatures and changing precipitation levels have extended the local pollen and mold season by eight to nine weeks over the past two decades. “Climate change is really a problem for health, and we are living and breathing the effects of climate change now,” said the study’s senior author, Kari Nadeau, professor of medicine and of pediatrics at the School of Medicine. Data for the study was collected in Los Altos Hills, less than five miles south of campus.

Sneezes, though, are the least of it. Historic heat waves and drought are causing a host of problems on the West Coast, including disruptions to hydropower production. The Stanford Woods Institute for the Environment is keeping a running list of media coverage.

After years of fruitless searching, John Coyle, ’90, had begun to accept that his best friend, best man and former Stanford classmate might well be dead. He and Kevin Bennett, ’90, had known each other since their middle school days in Michigan, where they’d competed against each other in speed skating. After the young men separately made their way to Stanford, they bonded over their shared Midwestern background and an appetite for living on the edge. But Bennett struggled with mental illness, and its grip tightened as he grew older. Despite the best efforts of their college crew, Coyle hadn’t heard a word from his friend since a disoriented Bennett called him from a Louisiana jail in 2006. Then, two years ago, a stranger reached out through Facebook. “Do you know a man named Kevin Bennett?” Coyle fired back a reply: “Are you kidding me? We’ve been looking for him for 13 years.”

“What matters is not so much the campus itself but what you see in it.” 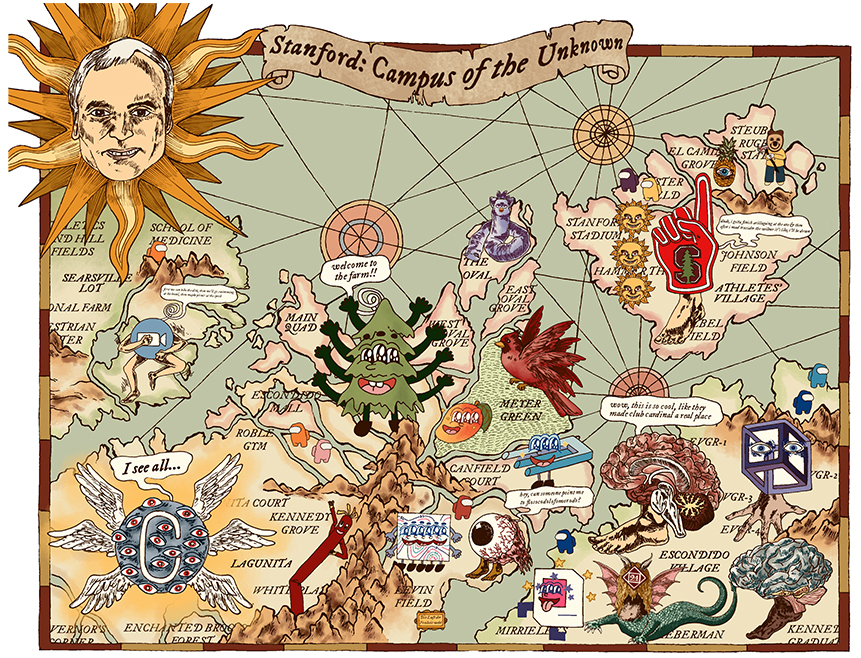 Lydia Wei, ’24, joined Stanford Data and Mapping for Society to get to know classmates during her remote freshman year. She became inspired by the Carta Marina, a fantastical 16th-century map of Scandinavia by cartographer Olaus Magnus—a man who used tales from fishermen and sailors to help create his map. Wei decided to create her own Stanford campus map from tales she has heard as well as her experiences of Stanford so far. “Like Magnus, I was beginning to know something about campus—to envision a campus—even if I’d never seen it,” she says on the website she created for the map. That eight-armed tree? It represents friendship. “It looks like it could give you a really good, tight hug,” says Wei.

At the end of arguably the most challenging school year in history, a lot of parents are ready to throw textbooks and progress reports into a summer bonfire. But many are also concerned about what their kids missed out on this year—academically and otherwise. So what’s a parent to do with a kid’s time off? Double down on fun and play, or seek out educational opportunities to make up for lost learning? Stanford asked three experts on play and child development about what’s at stake this summer and how families can make good use of time away from school. Spoiler: Getting kids together with peers should be a high priority.

There are stilted conversations in your future.

With COVID-19 vaccination rates varying in communities across the United States, many people feel unsure about whether and where we need to keep wearing masks. The San Francisco Chronicle polled a handful of local experts, who generally advised responding to the circumstances. “With indoor dining in most circumstances you will not be breathing in someone’s air space, but if you’re at a cafeteria next to somebody, or at a bar, I would personally not feel comfortable about that,” said Robert Siegel, ’76, MS ’77, MD ’90, a professor in the School of Medicine’s department of microbiology and immunology.

Adolescents are taking vaccination matters into their own hands. Forty states require parental consent before a child can receive any vaccine, an old restriction that’s creating new tensions in the culture war over COVID-19 vaccines. What happens when teenagers want the shot but their parents object? Some frustrated teens are looking for help from VaxTeen.org, a vaccine information site run by Kelly Danielpour, a rising Stanford frosh from Los Angeles. Danielpour launched the site before the pandemic, when she realized most adolescents were not aware of recommended vaccine schedules or their rights. “We automatically talk about parents but not about teens as having opinions on this issue,” she told the New York Times. “I decided I needed to help.”

Twenty-five years ago, www.stanford.edu made a very blue debut. Not everyone was amused.

Don’t cry because it’s over. Smile that it happened (25 years in a row). Stanford’s historic run of victories in the Learfield IMG College Directors’ Cup has ended with a second-place finish to the University of Texas at Austin. However, Stanford did sweep the Capital One Cups, which recognize the best men’s and women’s Division 1 college athletics programs in the nation.

It’s a wonder El Palo Alto ever took root so far from the wetter climes preferred by redwoods. It’s a miracle it has survived the encroachment of modern civilization. But somehow the 1,081-year-old conifer—beloved by Leland and Jane Stanford and featured on the university emblem—endures, though not without plenty of anxiety and TLC.

Stanford researchers have shown how to print dense transistor arrays on skinlike materials to create stretchable circuits that flex with the body. The technology could allow for electronic networks on and under human skin.

Forget the swimsuit—it’s reading season. The School of Earth and Stanford Law School have published summer reading lists. And in case you missed it, Stanford magazine asked faculty for their top book recommendations.

Does this really need to be a meeting? Tsedal Neeley, PhD ’07, a professor at Harvard Business School, suggests considering two things. First, does everyone need to be present at the same time in the same space? Second, will the information be better understood through text-based media, or is nonverbal context important? “All these meetings,” she told the New York Times, “I bet you, I promise you: 50 percent of it can go away if people have the courage.”