Q: I'm a fan of the new LED bulbs because they seem to be more energy efficient than compact fluorescents (CFLs). However, I'm perplexed by terminology, confusing packaging and lack of labeling—how can I compare the efficiency of one light bulb to another? How do I know what size LED bulb should replace a 60W incandescent or 15W CFL? Also, are there any lifecycle analyses on the overall environmental footprint of each kind of bulb?

The back of the label

The back of the new light bulb labels will include a few more important pieces of information for consumers.

Your question brings up the important point that efficiency isn't a tell-all metric of environmental impact. Life Cycle Assessment (LCA), which reviews the impact through all stages of a product's life, from harvest of virgin materials to manufacturing, use and final disposal, is a great approach to further ponder your best bulb choice.

Both studies found that for all types of bulbs, the "use" phase of the life cycle was vastly dominant for both energy use and environmental impact. The OSRAM study found that LEDs and CFLs are currently similar with respect to most of the environmental categories defined, and both far outshone incandescent bulbs. The OSRAM study concluded, however, that as LEDs become increasingly efficient, they will increasingly be the best choice. 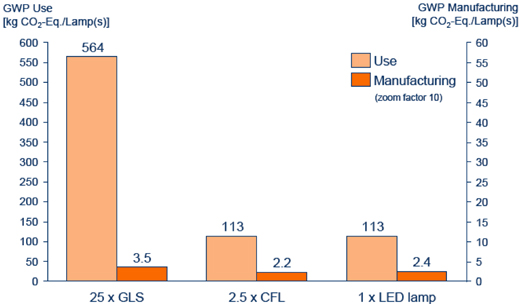 CFLs and LEDS are perhaps most different with regards to human toxicity. Mercury is present in all CFL bulbs and is a human neurotoxin that bio-accumulates in the environment. This issue is particularly relevant to the end-use phase of the LCAs. Breakage of the bulbs during disposal releases mercury vapor and can cause serious environmental contamination. Proper recycling of CFL bulbs is mandatory; however, many bulbs still end up in the trash despite free CFL recycling programs offered by major retailers such as IKEA, Home Depot and Walmart. LEDs do not contain mercury and broken bulbs do not represent a hazard.

LEDs: our light in shining armor?

Light Emitting Diodes (LEDs) have come a long way since their introduction as the ubiquitous red pimples of light used as indicators on electronic devices. LEDs use a chip of semi-conducting material, like a computer chip, "doped" with impurities to create a positive-negative or "p-n" junction. When electrons flow through this p-n junction, they fall to a lower energy level and emit a narrow spectrum of visible light. LEDs are extremely efficient because the wavelengths emitted are entirely visible light. In contrast, incandescent and fluorescent bulbs release wavelengths outside of the visible spectrum that are "lost" as heat, reducing the efficiency of the bulb while also causing it to heat up. LEDs already equal or exceed the efficiency of CFL bulbs. And while CFL bulb development has leveled off, the efficiency and economics of LEDs continue to improve. And while the maximum efficiency of CFL bulbs has leveled off at about 60 lumens per watt, the efficiency and economics of LEDs continue to improve. The DOE projects up to 160 lumens per watt efficacy could be achieved by 2025, approximately doubling the efficiency of LEDs currently on the market.

With the promise of such astounding efficiency, LEDs have quickly become the rising stars of residential lighting. The DOE has poured support into LED development and estimates that if solid-state lighting replaced all existing lights, customers would save $115 billion by 2025 and result in a 10 percent reduction in greenhouse gas emissions.

Despite the buzz, LEDs are not yet as commonplace in home and businesses as their efficiency-stardom should warrant. To explore this apparent contradiction, I spoke with Brad Powley, MS '08, co-author of the report "Projecting LED Competitiveness," and a PhD student at Stanford's Precourt Energy Efficiency Center. Powley noted that penetration of LED technology into commercial and industrial sectors has been more fluid than in the residential sector. "Industries are more likely to use sophisticated decision-making processes, which consider not only the upfront costs [of the bulb], but also the long-term cost-benefit of using LEDs over other technologies," Mr. Powley explained. For example, the City of San Francisco is making the shift to LED bulbs for street lamps. The expense and inconvenience of maintenance and bulb replacement for thousands of 40-foot fixtures around the city made LEDs a clear choice when analyzing the long-term costs.

According to James Broderick, the DOE's lighting program manager, the next 10 years will be a "game changing decade" for LEDs in the home market. The Energy Independence and Security Act of 2007 calls for phasing out low-efficiency bulbs starting in 2012, and a minimum efficacy of 45 lumens per watt by 2020. Increasing availability and affordability of LED bulbs, along with education and outreach programs, will be key factors in boosting LED sales.

Broderick cautions, however, that not all LED bulbs are up to par. "It's important to note that for any LED lighting product, light output and efficacy aren't enough. You still need to consider such factors as color quality, light distribution and lifetime to ensure that product performance is acceptable to consumers. And right now, the data show that many LED replacement lamps do not meet these other product performance metrics." Broderick and the DOE are confident that LEDs will rise to this challenge in the coming decades and recommend Lighting Facts, a voluntary certification and labeling system for LEDs, to ensure you purchase a top quality bulb.

Efficient bulbs alone do not necessarily equate to an energy-efficient home. Thoughtful lighting strategies and habits are also essential to improve lighting efficiency. A few basic tips are outlined below.

A recent study on LED efficiency by Sandia National Laboratories notes that historically, technological advances in lighting efficiency are reliably countered by an equal increase in overall light consumption. With sound lighting knowledge and ever-more efficient LED bulbs on the market, we have the opportunity to defy this trend and reduce our environmental footprint from lighting energy demand. Will this be the "game-changing decade" where we make that leap?

MAIKA NICHOLSON is a graduate student in civil and environmental engineering.