The Laborers Nobody Knows

Project aims to fill in the history of Chinese railroad workers.

It was 1970 when history professor Gordon Chang, then a new graduate student fresh out of Princeton, walked into Green Library to pore through Leland Stanford’s papers for the first time. Forty-five years later, he is still looking for what he went there that day to find: accounts that would describe the lives of Chinese workers instrumental in the building of the transcontinental railroad.

An estimated 10,000 to 15,000 Chinese worked on the railroad at a given time, but details about who they were, how they lived and how their experience changed their families’ lives are largely undocumented. Now a growing number of academics—and one interdisciplinary project based at Stanford—are trying to change that.

Chang, along with co-director Shelley Fisher Fishkin, professor of humanities and of English, launched the Chinese Railroad Workers in North America Project to “give a voice” to the Chinese migrants whose labors “helped to shape the physical and social landscape of the American West.”

“This has really been a largely neglected part of American history,” Fishkin notes. “We wanted to make sure they wouldn’t be erased from the public narrative. We felt a personal obligation as Stanford professors to recover the stories of the people who played a key role in the creation of the fortune that created our institution.”

Fishkin, a leading scholar on Mark Twain, first began thinking about the Chinese migrants when she learned that Twain had tried to write about discrimination against the Chinese, only to have his work censored. Just as Chang had done many years earlier, Fishkin visited Green Library hoping to read letters from the Chinese workers. Finding none in the collection, she asked Chang where she might go next. “No one had found anything,” says Chang, MA ’72, PhD ’87. “People had tried for decades to find any materials, and they had not been successful.”

Sarah Sadlier, a senior in American studies who has worked with Chang and Fishkin since her freshman year, describes the quest for a single document written by a Chinese worker on the Central Pacific Railroad as the project’s “holy grail.” And for the many researchers involved in the project, she notes, “this is not a demoralizing deterrent—this is an exhilarating challenge.”

A number of reasons can explain the absence of narratives by the Chinese laborers, according to Fishkin. Early materials left behind in the United States would have been in Chinese and likely not understood by historical societies at the time. Famine, poverty and turmoil in 19th-century China meant that letters sent back could have been lost while populations were moving. And the cultural revolution in 20th-century China meant that documents connecting individuals to the United States were dangerous to have and thus likely destroyed. 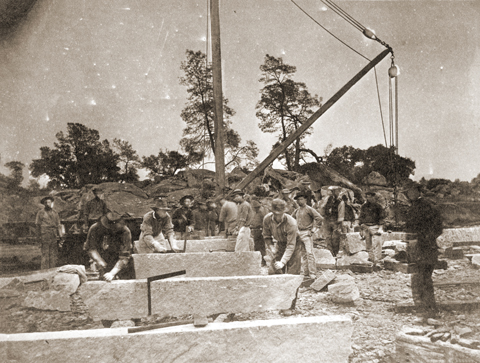 “We haven’t found that elusive piece of evidence,” Chang explains. “We hope something will turn up in China. We have colleagues in China who are scouring villages there and archives there, but they have not found anything.

“But this raises the issue of other ways to recover history,” he says.

The process is a bit like piecing together bits of a mosaic, says Fishkin. Observed behavior, such as newspaper accounts or other company employees who wrote about the Chinese, provide some insights. The Chinese brought some of their cultural traditions with them, such as boiling water for tea rather than drinking straight from mountain streams.  The project’s researchers have combed through employment records, which often misidentified the Chinese. More names were found via United States Census data, which began adding a code for Chinese in 1870 and could be cross-referenced with the occupational designation of railroad worker. They also circulated questionnaires to descendants of railroad workers, collecting oral histories and inquiring about names, arrivals to the United States and life after the railroad.

Despite the lack of first-person accounts, the project’s directors have reasons to be hopeful. Digital technology has made available many more research materials, and the transnational collaboration has increased the possibility that previously overlooked information might be discovered. For example, one line of calligraphy by a railroad worker—interpreted by one of Chang’s and Fishkin’s colleagues in China—showed up in the California State Railroad Museum in Sacramento, challenging the belief that all laborers were uneducated.

In 2015, the journal Historical Archaeology devoted a special issue to the Chinese railroad workers. Artifacts found, including remnants of teacups and bowls, have helped shape the picture of daily life and offered clues about health and culture.

Ultimately, project leaders hope to have an online multilingual archive, hosted by Stanford University Libraries, that would include visual images, oral histories from descendants and other historical materials, with the goal of being fully accessible to the public by 2019, the 150th anniversary of the railroad’s completion.

“Here is the challenge,” Chang and Fishkin wrote in Historical Archaeology. “How do we as scholars give voice to the voiceless? How do we understand lived experience if we have nothing from the actors themselves? Is it possible to employ new methodologies of interpretation, beyond the traditionally historical, to recover and interpret the past?

“These questions lie at the core of the Chinese Railroad Workers in North America Project at Stanford University.”

Back Down to Earth

Two years later, balloon cameras turn up in the desert.