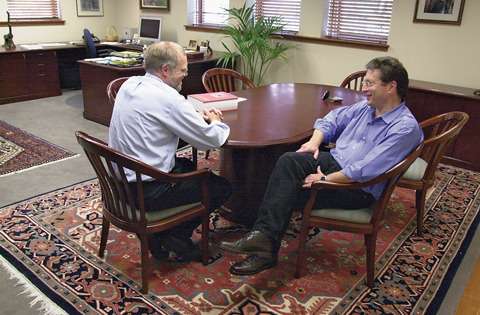 In addition to benefiting from what transpired during John Hennessy’s years as president, Stanford was enhanced by something that simply endured: a 16-year collaboration with Provost John Etchemendy.

“It is certainly recognized both at Stanford and outside Stanford,” says Steve Denning, MBA ’78, chair of the Board of Trustees, “as being a partnership that represented a unique complementary and enduring relationship that produced truly extraordinary performance, which likely could or would not have been achieved if the two were working independently and/or for lesser duration.”

Etchemendy was appointed provost in 2000 by then-president Gerhard Casper on the recommendation of Hennessy, who was provost, president-designate and chairman of the search committee. Etchemendy, PhD ’82, was chairman of the department of philosophy at the time.

“Respect and trust” have been the keynotes of their work together, says Hennessy. Denning could see it unfold: “My perception is that they choose to consult each other on most decisions, not because one of them requests or mandates such, but because each respects the other’s perspective and judgment, and wants or desires the input.”

They also share the same intense affection for the school they serve. Etchemendy, observes Hennessy, “easily could have been a university president but didn’t want to leave Stanford.”

When Etchemendy reflects on the partnership, he says the synergy almost transcends explanation. “We have been in sync all 16 years. And that’s not to say that we don’t come to different conclusions on an issue. But in every single case, we talk to each other and instantly, almost instantly, we come to a single conclusion. . . . And that has just happened.

“I don’t know, what can I say? We like each other; the chemistry works. We have never had an issue that even came close to a serious disagreement or argument. So how do you figure that?”

Mike Antonucci is a senior writer at Stanford.