The Company He Keeps

Can a freshman entrepreneur have it all? 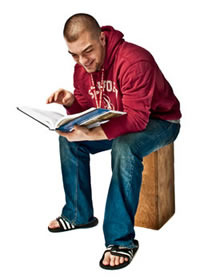 Graduate School of Business lecturer David Hornik describes them as "entrepreneurial athletes"—intensely driven students who are starting or building companies at the same time they're juggling the demands and opportunities of a Stanford education.

Among the latest wave is freshman Jonathan Manzi, 19, who spent the fall quarter trying to enjoy living and studying on campus while still managing a multimillion-dollar business he created as a Massachusetts 15-year-old. Among the things he learned immediately was that he wanted to take the winter quarter off and return in the spring (well, probably return) with a better system in place for the extreme multitasking that he calls "the most optimal form of life."

His adviser is Hornik, '90, a general partner with August Capital, a Menlo Park firm that manages $1.3 billion invested in more than 75 companies. He sees in Manzi a familiar entrepreneurial bent: an addiction to company building. And Hornik preaches to him that for all the Stanford students who dropped out to satisfy that craving, even more completed degrees while successfully developing or launching their idea of the next big thing.

Manzi says he's "fairly sure" he'll be back. He has remained in the area during his quarter away and adds that he already has faced the dilemma of wondering what lucrative business deal he might be missing while struggling to conjugate verbs in a Spanish class. But in his most levelheaded moments, he says, he tells himself "this is what I chose. I already did my cost-benefit analysis, and in the long run it's worth it."

The pressures he faces, such as long-distance oversight of seven full-time and 11 part-time employees, offer a glimpse into the wide experiences of Stanford's prodigies. The standard image is of whiz kids who already seem to have the world in the palm of their hands. Judging by Manzi, maybe they do—but the grip is darn slippery.

Manzi's company, Vintage Network, is in simplest terms an Internet advertising business that finds new customers for firms such as Netflix, Blockbuster and Visa. Its success—it grossed about $3.2 million in 2008, but Manzi declines to be specific going forward—was forged by simplifying the web marketing techniques that promise free goodies like iPods and laptops in return for burdensome subscriptions to all sorts of products and services. Manzi's alternative offers the same types of prizes in a way that he says has proved more transparent to consumers and more efficient for the companies landing customers.

Making it all hum along, however, can mean being awake most of the night to confer with a programmer in Romania. It also means being in command of two offices in the Boston area from 3,000 miles away, no small responsibility for someone who had an employee embezzle more than $15,000 when the company was barely under way.

"I don't sleep," says Manzi. "Chaos has become normalized for me. When I'm actually not in a chaotic situation, it feels abnormal. But I love the chaos. That's what makes it exciting."

And that's where Stanford comes into the clearest focus for him. "I am going to indulge my intellectual vitality in the fullest extent," he says. The term student entrepreneur strikes him as almost redundant, because both words imply inquiry and investigation. "When I'm fulfilled philosophically to a very high level, then I can perform as an entrepreneur to a very high level."

Does that necessarily mean basing that fulfillment on a return to the Farm? Maybe not, but then there's Hornik, who says, "He'll be back or I'll come find him."

Grace, and a Golden Touch

Up to the Challenge