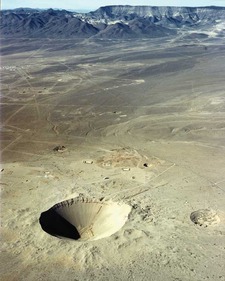 For four decades, the U.S. government exploded nearly 1,000 nuclear bombs at the Nevada Test Site, a 1,400-square-mile expanse of desert scrub, dry lakebeds and the occasional Joshua tree, 65 miles north of Las Vegas. Those kinds of tests were banned in 1992, but last spring a group of researchers from the Center for International Security and Cooperation visited to see what remained.

Among the items: a warped, rusted old train trestle installed to see if it could withstand a 15-kiloton blast; a series of domes that sprout from the dirt—fallout shelters made of different materials to gauge which would survive an attack; and the Sedan Crater, the result of a 104-kiloton explosion in 1962 that "lifted a huge dome of earth 290 feet in the air, moved 6.5 million cubic yards of earth and rock," according to an official history of the site, and "sent a cloud of radioactivity off in the direction of Salt Lake City." What's left is a crater measuring 1,280 feet across and 320 feet deep, and a small metal platform installed for tourists to view the astonishing damage. 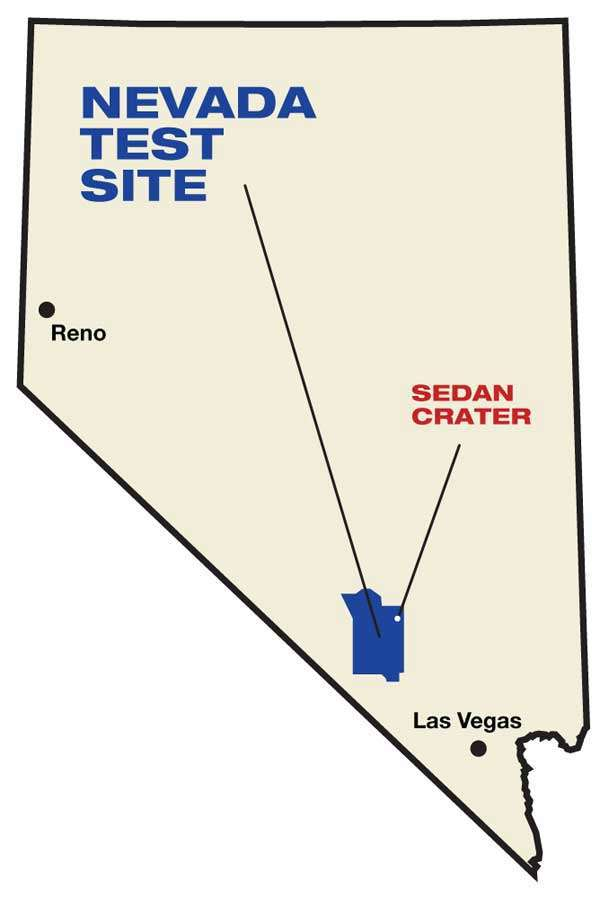 The researchers also traveled more than 1,000 feet underground to a warren of alcoves where scientists today test the properties of plutonium, among the most complex of the elements, to ensure the reliability of the U.S. nuclear stockpile. Then they visited the Nonproliferation Test and Evaluation Complex, dubbed the "world's largest facility for open-air testing of hazardous toxic materials and biological simulants." There, out in the thin desert air, workers at the test site (now officially known as the Nevada National Security Site) make and detonate homemade bombs, mixing dangerous and even deadly chemicals, so that they can better understand how to protect against improvised explosive devices of the sort that might be found in war zones, as well as large-scale industrial accidents.

The trip was organized so that several CISAC pre- and postdoctoral fellows could get a firsthand look at the power of nuclear weapons. It was funded in part by the Stanton Foundation, which this year funded three CISAC fellows examining nuclear issues from a variety of academic disciplines. Lynn Eden, CISAC's associate director for research, says the foundation emphasizes the value of policy-relevant research, so it was important to help fellows get out of the library for a few days so they could "get a more perceptible sense" of the power of nuclear weapons.

Several researchers said the visit did just that. John Downer, a CISAC post-doctoral fellow studying concepts in epistemology as they relate to nuclear weapons, said the trip offered new insights into the challenges weapons designers face in transferring their knowledge about these extraordinarily complex devices from one generation to the next. For Edward Blandford, a postdoctoral fellow studying nuclear reactor safety, the Sedan Crater was particularly striking. "You can see it on Google maps. You can see it elsewhere. But physically standing there, looking down at the abyss, you get a visual sense of how powerful these things are," he says. "It really gives you a feel of what the weapons are like."

The visit to the test site was followed by a trip to the Atomic Testing Museum in Las Vegas, where the exhibit details the history of the nuclear weapons program in the United States and how it relates to both the Cold War and more modern security issues. Postdoctoral fellow Anne Harrington de Santana, a political scientist, noted that one of the interesting things about the site is its sheer size—roughly that of Rhode Island. The visit, she said, underscored just how tightly nuclear weapons are woven into the fabric of American history and geography.

Michael Freedman is senior editor at Stanford's Center for International Security and Cooperation.

He thought the free-spirited drama people were weird until he became one.