The Bad Boys of Encina Hall

After a $27 million renovation, a stately campus landmark reopens this fall. But once upon a time it was bedlam. 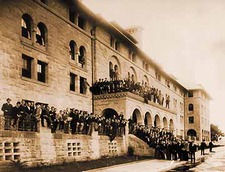 It was the grandest dormitory in the country -- an imposing four-story sandstone edifice with a stately lobby, huge dining hall and the luxury of electricity and hot running water. Opened on October 1, 1891, the University’s first day, Encina Hall was modeled on a resort at Lake Silvaplana in Switzerland. Leland Stanford had stumbled upon it during a European sojourn in 1888 and rushed sketches back to architect Charles Allerton Coolidge. Stanford spent $477,000 (four-fifths of the cost of the Inner Quad) to approximate the hotel’s elegant floor plan at the dorm built to house 400 men.

But when the students arrived, their frontier manners elbowed out any old-world pretensions. Many of them had grown up in the rural West, and this was their first taste of independence. Within a month, Encina students had freed a freight car from a nearby rail spur, threatening a wreck on the main line. It took hours, a newspaper reported, to calm Leland Stanford.

Encina men were proud . . . that student activities, student plans, student leadership [were] centered in the Hall. But this pride did not seem to include a personal feeling for the building itself. Its noble architecture, its amplitude, its great dining hall, its furnishings, were not thought of as personal possessions to be cherished and jealously cared for. Accordingly, as time went on, everything that could be abused was abused. Roughhousing spared nothing. Encina was . . . known to outsiders as the ‘madhouse.’

This fall the madhouse reopens, after a $27 million seismic retrofit and restoration, as the headquarters of the Institute for International Studies. The renovation will spruce up the sandstone exterior and recreate the original main entrance and lobby.

All the attention to historic detail will not, thankfully, recreate the atmosphere of Encina in its first two decades, when student high jinks ran from annoying pranks to outright vandalism and violence. One student wrote home about the popular trick of “turning up a room.” A resident would come home to find “all but the walls of his room inverted, with the inkstand crowning unsteadily the sorry pile.” University furnishings in that pile usually included two bronze-trimmed iron bedsteads, one or two wardrobes, a large study table, four high-backed oak chairs, a mirror, two rugs, electric lights and a washstand. (Room and board cost $20 a month -- but tuition was free.) In 1893, someone stole the cigars and whiskey that Jane Stanford provided for former U.S. President Benjamin Harrison (see Stanford, June 1991), who was staying at Encina while teaching law on campus.

Encina’s long, wide halls and cavernous stairwells encouraged student rambunctiousness. Throwing things into the lobby, from trays full of dishes to heavy furniture, became a favorite game. Freshman Henry Boutelle wrote his mother on November 22, 1891: “At 11:30 p.m. the lights went out, and the fellows ‘fired’ a chair, a spittoon, and several other things downstairs . . . the chair came pretty nearly hitting Professor Swain on the head as he walked by.” When Boutelle and his roommate went down the hall to investigate, “we saw three streaks of fire shoot out and heard three shots, so Fred and I concluded that we were in a dangerous locality and quietly went back to our room.”

Cornell’s former president, Andrew D. White, stayed in Encina during a spring 1892 lecture series. He offered this advice to the Stanfords: “I would urge you not to repeat the Encina plan. For a family hotel it is perfect . . . but the fundamental principle in erecting dormitories is separation and segregation. . . . Long halls encourage too much mischief.”

The administration responded to the growing turmoil with tighter management. It assigned student monitors in 1896, and eventually watchmen were put on patrol. But trouble persisted. As frosh-soph rivalry developed, so did hazing. One common practice was “tubbing”: holding a freshman’s head under water in a bathtub until he “bubbled” -- that is, opened his mouth in desperation and gasped for air. In spring 1905, two students were expelled for “shooting fireworks and revolvers and flooding the place with water” and breaking “nearly all of the lights in the hallways,” in the words of watchman Robert Slattery. Another was evicted for smashing furniture but came back one night to stir up trouble. Slattery -- who came under fire himself for carrying a gun -- wrote to police authorities on September 29, 1905 about the student’s return:

I had just come on duty when I noticed that there was something up. The lights in the Club Room were turned out, chairs were broken and tables turned over. . . . I went into the Club Room and began to place the chairs in their right places; then they started to throw rocks and beer bottles, shaving cups, spittoon boxes, chairs and wooden boxes . . . two men stayed and threw rocks at me for at least 15 minutes.

Twenty “incorrigible rioters” were evicted as a result.

The earthquake of April 18, 1906, imposed its own abrupt discipline. Two large chimneys collapsed through to the basement, killing one student and injuring several others. Encina was repaired within five months, but its ambience had changed. The earthquake “did something to clear the local atmosphere,” Registrar Elliott wrote 30 years later. “The larger aspects of the University life resumed their proper place. In the presence of the great disaster there was a disposition to let bygones be bygones and to find a reasonable basis for faculty-student relations in matters of conduct and discipline.”

While Encina never returned to its pre-earthquake anarchy, there were occasional echoes of the early days into the 1970s. David Jacobson, a future head of fund-raising at Stanford, recalled arriving at his freshman room in the mid-’20s to find a dozen “yelling and hollering” football players tearing meat by the handful from a barbecued sheep in the middle of the room.

Former head yell leader Jim Triolo, ’35, remembers Encina residents winding fire hoses through stair balusters. When they turned on the water, the hoses inflated, sending balusters flying. Triolo also recalls the time a student dropped a water bag from an upper floor during a Mother’s Club tea in the Encina lobby. It hit Mrs. Herbert Hoover -- and the perpetrator got the maximum work penalty at the Convalescent Home.

At least by then, freshman hazing rarely intruded on dorm life. When the University finished Encina’s attic and basement in 1916, adding 100 rooms, the remodeling replaced bathtubs with showers. Overnight, “tubbing” stopped. Then, in 1923, Encina became a freshman-only dorm when two new men’s residences, Toyon and Branner, opened.

Two more men’s dorms, Stern and Wilbur, were built after World War II, and Encina was earmarked for administrative offices. The last men departed in January 1956. That fall there were delays completing Florence Moore Hall, so 100 women temporarily moved into Encina. Six former residents surprised them with flowers -- in the urinals.

After a $1.35 million conversion from residence to office facilities in 1958, Encina housed most of the University’s financial and business operations. During the Vietnam War it became a target for demonstrators. In 1969, protesters broke in, stealing files and sacking payroll records and, a year later, demonstrators blocked access to the building, off and on, for 12 days. Then on June 7, 1972, a major fire, thought by many to be arson, broke out in the central attic and spread to the upper floors of the largely unused east wing. Damage exceeded $1 million. The west wing and lower floors of the central wing were mostly unscathed and quickly reopened.

In 1995, the Board of Trustees decided that the historically significant building, including the derelict east wing, should be restored to its original splendor -- and fortified to weather an earthquake. Presumably, a temblor could never again serve any purpose, now that the bad boys are history.

Karen Bartholomew, ’71, former editor of the Stanford Observer, is active with the  Stanford Historical Society.

A PhD candidate discovers the pressures -- and pleasures -- of being a teaching assistant.

Many Stanford winemakers have followed a path as scenic and winding as a Napa country road.