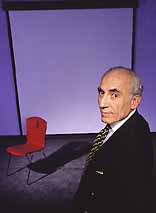 Think of it as CEO charm school. Jerry Weisman takes high-tech bosses and teaches them how to gesture, how to talk -- and how to pitch their companies to potential investors.

Weisman, ’52, founded Power Presentations Inc. in Santa Clara, Calif., in 1989. At the time he was broke after spending three years working on his second unpublished novel. That’s when his college buddy, Ben Rosen, ’55, chair of Compaq Computer Corp., suggested he give some presentation pointers to Compaq’s CEO. The lessons were so successful, he says, “I decided there might be a business in this.”

Since then, Weisman, who spent 10 years as a public affairs producer at WCBS-TV in New York, has coached more than 500 executives, prepping them for the all-important “road show” -- the tour that usually precedes a company’s initial public offering. His four-day course runs $20,000.

The Bad Boys of Encina Hall

After a $27 million renovation, a stately campus landmark reopens this fall. But once upon a time it was bedlam.