Hoover researcher targets insider trading and other conflicts of interest.

Research fellows generally don't command much TV time. But a year ago, the Hoover Institution's Peter Schweizer made a splash when the CBS news magazine 60 Minutes featured him and spotlighted his book, Throw Them All Out: How politicians and their friends get rich off insider stock tips, land deals, and cronyism that would send the rest of us to prison. The prime-time attention helped spur the passage of the Stop Trading on Congressional Knowledge Act, which prohibits members and employees of Congress from using non-public information for private gain.

Stanford asked Schweizer to reflect on the legislation and discuss his current research in an email Q&A.

The STOCK Act was signed into law in April. What are your feelings now about how meaningful the legislation was?

It clearly represents a few steps forward, but I think we still have quite a way to go. The law calls for the Securities and Exchange Commission to essentially enforce the law, and I doubt that they are going to willingly go after a powerful congressional figure, regardless of party. Still, the law does require more frequent disclosure of congressional stock transactions, and that is a very good thing.

You believe additional prohibitions on financial activity by members of Congress are needed. What are the most urgent?

I don't think we should allow members of Congress to trade stocks in the sectors where their committee has regulatory control. Members of the Senate Armed Services Committee, for example, should not be trading defense-related stocks. If your committee deals with health matters, you should be prohibited from trading health-related stocks. These sorts of conflict-of-interest restrictions seem obvious to me and they apply in the executive branch. A senior Pentagon official a few years ago had to sell all of his Coca-Cola stock before he was confirmed because the soft drink maker has contracts with the military.

You've recently devoted substantial research to tracking the activities of "bundlers"—individuals who solicit large contributions for candidates. What interests you about this kind of fund raising?

My assumption used to be that people raised money for candidates because they liked them or believed in them. And maybe they wanted to be ambassador to some tropical island. But increasingly bundler money for candidates for both parties is really more of a business investment. You raise money and that gives you greater access to government loans, grants and even contracts. That is a very troubling development. With government so large and with so much money to spend, increasingly corporate executives and financiers see partnerships with certain politicians as a good revenue stream. 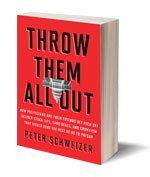 Do you agree with descriptions of you as a conservative author? What's the connection, if any, between your political ideology and the investigative research you do?

I am a conservative/libertarian. That means that I'm skeptical of government power. But it also means I'm skeptical of corporate power. As Milton Friedman used to say, I'm pro-free market, not pro-business. Corporations often hate the free market. They see regulations (especially when they can influence their creation) as a tool to keep competitors out. But while I'm conservative, that doesn't mean I only ding one party. There are plenty of Republican politicians that don't like me either. Honestly, I think the party divide matters less than it used to. The biggest divide I believe we face is the divide between Washington, D.C., and the rest of us.

Government disclosure and fiscal integrity are common topics in your writing. Is there one particular issue that concerns you the most? And why?

Transparency is the key. We can pass all sorts of laws and regulations. But politicians are ambitious and creative. They will find ways to get around them. The best thing we can do is make as much information as possible accessible to the American people. That sounds simple, but there is lots of resistance. Before the STOCK Act, members of Congress would disclose their finances on paper forms. Why not online? It's not because they lacked the technology.

You co-wrote with former Secretary of Defense Caspar Weinberger a novel, Chain of Command, about a presidential assassination and a national declaration of martial law. Was that just about fictional thrills or do you lose sleep over dire political scenarios you think could transpire?

I think when it comes to national security we walk a very important balance. We need security to protect our country. We live in a very hostile world. But I believe in civil liberties. And I don't think we should ever doubt the possibility that someone, however well intentioned, might ask us to toss them away in the name of security. We've not approached that point yet by any means. But like I said, I distrust central power.

Getting the Most Sustainable Squeeze from your OJ: Essential Answer