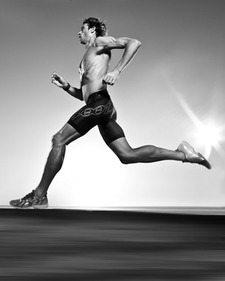 Rich Roll is something of a real-life Popeye, a man whose leafy diet fuels shocking feats of strength. At 43, Roll is a "plant-based athlete" whose vegan diet powered him to a top finish at last year's Ultraman World Championships, an event that crams 6.2 miles of swimming, 261.4 miles of cycling and 52.4 miles of running into three days under searing Hawaiian sun.

Roll was not always a veggie evangelist. For years after his tenure on the NCAA Championship Stanford Swim Team, Roll continued to "see that Stanford athlete in the mirror," even though, he says, that athlete had morphed into an overweight, out-of-shape, middle-aged man. Roll's fitness initially was derailed by a struggle with drug and alcohol addiction. And although he's been sober for more than a dozen years, the demands of raising four children, producing films and practicing entertainment law left little time for his once-core passion for fitness. Then he had a birthday.

"You wake up and you're 40," Roll says. "I realized, 'I feel lousy, I'm overweight, I want to be healthy.'" He started exercising and cut out meat, hoping to accelerate his journey to health. After several months, however, Roll decided vegetarianism wasn't working for him. "My version of a vegetarian diet included lots of pizza, which might have been the problem," he admits. He bought some books on veganism, the practice of eating only plant-based food—no meat, eggs, animal fats or dairy products—and gave that a try. Within a week of eating vegan, Roll says, "I had all this energy. I realized, 'Wow, I could do something with this.'"

Roll decided he'd like to train for the 2008 Ultraman World Championships, an elite, invitation-only race he'd read about. "I had to talk the race director into letting me in. I told her, 'I promise I'll be prepared.'" After a scant six months of training, Roll placed 11th overall in the race.

The story of his transformation from addict to vegan to world-class athlete made Roll an immediate media hit. His recap of the journey was a top story on CNN.com for several days following its publication; Men's Fitness named him one of its "25 Fittest Guys in the World" for 2009. "I got as many as 400 emails from people who said they were inspired, people who were sharing their intimate health struggles as a result of hearing my story."

In partnership with his wife, Julie Piatt, a well-known Los Angeles yoga instructor, Roll is writing a vegan cookbook and hosting retreats to help others transform their lives through diet, exercise and yoga. "I'm realizing that God wants me to help others," Roll says. "That's a feeling I don't get being an attorney."

WILL LAUGHLIN is a writer in Boulder, Colo.

Grace, and a Golden Touch